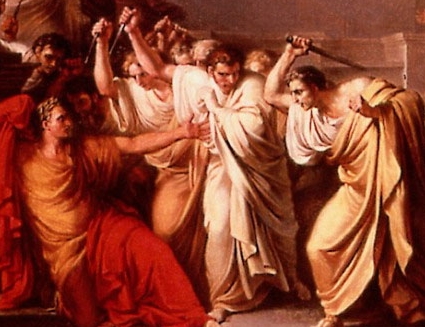 Caesar looking into the eyes of his surrogate son as the blade of betrayal sliced open his mortal flesh while he pathetically gasps, through a mouthful of blood and spittle, the words: “et tu Brute”.

The mnemonic power of these images of the Ancient world are well-known to us all. We shouldn’t, however, thank the likes of Plutarch or Tacitus for such vivid portrayals, but Mervyn LeRoy, Stanley Kubrick and William Shakespeare.
Modern artists like these are not responsible for the immortalization of well-documented facts, but rather for giving us a history which is undeniably more effective at infiltrating the collective-consciousness.

Just to set the record straight: the fiddle hadn’t yet been invented in the 1st century AD, and Tacitus, an eye-witness to the blaze, reports that Nero made considerable efforts to counter its deadly effects.
Moreover, we’ve no idea as to the exact dialogue from the revolting slaves during the Third Servile War (73-71 BC), and the famous ‘et tu’ was considered an anachronism within a century of the event itself.

So, what to make of all this? Is this important? Do we care? Does the truth get in the way of a good yarn?

Perhaps talk of this sort is enough to get you a little hot under the collar. Well… if so, let’s hope that this source-based approach to the value of authenticity takes some of that heat and uses it to shed a little light.

The words of the aptly named professor Donald Watt are a good place to start our investigation:

‘Balderdash!’ The purist in us screams.

Well… let’s compare notes. Livy and Polybius both wrote of Hannibal’s crossing of the Alps. However, whilst Polybius was in his late teens at the time of the Carthaginian general’s death, Livy would not even be a twinkle in his father’s eye for another 120 years.
Here’s the contemporary account:

“The summits of the Alps, and the parts near the tops of the passes, are all quite treeless and bare, owing to the snow lying there continuously both winter and summer. But parts halfway up both sides are wooded and generally inhabitable”.

And here’s Livy, writing 170 years after the fact:

“There were no tree trunks or roots by which a man could hoist himself up, only smooth ice and thawing snow, over which they were always rolling… Four days were spent at the cliff, and the animals nearly perished of starvation: for the mountaintops are all particularly bare and such grasses as do grow are buried beneath the snow. Lower down one comes to valleys, and slopes bathed in sunlight, and streams, and near them are woods, and places more suitable for human habitation”.

To put this plagiarized and embellished passage into a modern time-frame, it would be like one of us picking up a pen one lazy afternoon and writing with vivid veracity about the annexation of Texas in 1845. 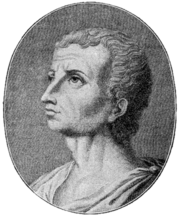 And although we often give the ancients a pass when it comes to the art of historiography, Livy wasn’t writing during the pioneering days of Herodotus. Indeed, by his time the genre was already well-established. More to the point, the man he uses as his ‘inspiration’, Polybius, wrote a largely factual and, often, disinterested work.

In other words, Livy couldn’t say that he didn’t know any better viz-á-viz the presentation of the cold, hard facts.

That said, facts, no matter what the temperature, may not have been Livy’s raison d’etre; there’s no reason to think he was trying to pull a fast one. As a product of the Golden Age of Latin Literature, and a contemporary of men like Virgil, Horace and Ovid, he may have been much more concerned that his prose was purple than precise.

The underlying question that we’re left with then is: ‘Who is better, Polybius or Livy?

Despite my own personal love for Polybius, I cannot find any ammunition with which to argue that he is more entertaining or accessible than the text of Livy. Meanwhile it’s hard to deny the allure of Livy’s work.

Therefore, we have to ask yet another question: Do we ‘learn’ more with an entertaining tale?

Well… possibly, though possibly not. To be accurate we should say we learn less, but learn more easily and swiftly.

The very notion repulses.
These two examples are perhaps perverse extremes. There are other, more moderate illustrations such as HBO’s Rome. It has all the main historical events in the right place and looks astonishingly good, but it too must be taken with a pinch of salt.
It seems that Professor Watt’s proclamation about the incompatibility of truth and entertainment is not without its supporting evidence… But, in our humble opinion, there is still a place for the trustworthy historian. It is because we have such confidence in his or her credibility that we are overawed by the truth they communicate… and so the long dead world comes alive on the page.
Take, for instance, Thucydides’ accounts of the Athenian plague or Polybius’ of the inadequacy and pomposity of Roman social climbers. They resound strongly, simply because they are believed.

So while I would always advocate reading the more accurate source, I feel it is still better to read something rather than nothing. People should enjoy history, not neglect it on the bedside cabinet.

Whatever the source and whatever the motivation, it is hard to argue with the words of a man who knew a thing or two about writing, William Faulkner:

“Read, read, read. Read everything — trash, classics, good and bad, and see how they do it. Just like a carpenter who works as an apprentice and studies the master. Read!”