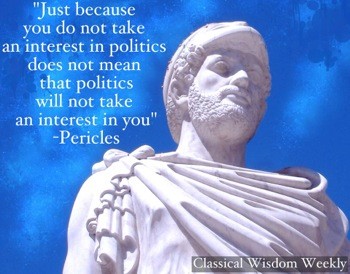 It is the close of the first year of the Peloponnesian war. Athens, no stranger to war, finds itself mourning those who had fallen on the field of battle, the sons and fathers lost. As was customary in Athens the bodies of the deceased had been collected and displayed under a tent for three days. During this time, various citizens paid tribute and the families were allowed to say goodbye to their loved ones. After the tree days, a funeral procession would be held where an esteemed citizen would make some small speech on behalf of the lost. And so it was around the year 430 BCE that Pericles would be selected to address Athens.

While Pericles’ funeral oration undoubtedly reflects the sentiments of the statesmen, we must remember that the text was not transcribed verbatim. Thucydides would have written the funeral oration some time after the actual speech, giving him ample time to reword and edit anything he pleased. However we can still be reasonably sure that the text by Thucydides is a faithful representation of the actual funeral oration.
As Pericles takes the stage, he makes clear his concerns about such a speech. While the funeral procession is surely a noble tribute for such courageous souls, Pericles believes that the words of any many will often fall short of accurately describing the deeds of the dead. Pericles believes he runs the difficult task of balancing a speech so as not to undercut the valor of the warriors while simultaneously not appearing to exaggerate. These concerns noted, he declares that it is tradition for words to be spoken on such an occasion, so he hesitantly obliges.

“When men’s deeds have been brave, they should be honored in deed only, and with such an honor as this oration public funeral, which you are now witnessing.” – Thucydides, Pericles’ Funeral Oration

The speech that Pericles delivers is such a dramatic departure from the customary oration that it is often considered a eulogy of Athens itself. Pericles begins by mentioning the struggles of the Athenian ancestors whom “…after many a struggle transmitted to us their sons this great empire.” And what an empire it might appear to be. Pericles goes to great lengths to detail the glory and the esteem of the Athenian empire.
With a government that pursues liberty and gives power to the many and not the few, Athenian democracy has become a model for success for all the Greek city-states. A system of government where the weak are empowered and public office is achieved through merit and not a matter of privilege. Pericles describes that in Athens any man, no matter his station in life, can find a way to strive within society. Pericles explains…

“Neither is poverty an obstacle, but a man may benefit his country whatever the obscurity of his condition.” –Thucydides, Pericles’ Funeral Oration

Pericles continues by recounting the several military conquests and how their army is considered to be far superior than any other the ancient world can produce. Even the Spartans who come upon their land often find themselves retreating from Athenian spears. And the brave Athenian soldiers, even when fighting on foreign soil, have little trouble overcoming their adversaries. Pericles continues by declaring that Athens also excels in times of peace, holding several games and sacrifices throughout the year. It would appear that the empire of Athens has found prosperity in all measures of life. Pericles says himself…

“To sum up: I say that Athens is the school of Hellas, and that the individual Athenian in his own person seems to have the power of adapting himself to the most varied forms of action with the utmost versatility and grace. This is no passing and idle word, but truth and fact; and the assertion is verified by the position to which these qualities have raised the state.” -Thucydides, Pericles’ Funeral Oration

So why would Pericles go to such great lengths to paint his city as a thriving metropolis? Remember that this is not a political rally, but rather a funeral procession. It is likely the Pericles would have been thoughtful of Athenian moral at this time. On the precipice of a great war, Pericles would have done well to bolster the spirits of the living while commemorating the sacrifices of the departed. Pericles gives another explanation by explaining that the merits of the great city reflect the merits of the lost. And the greatness of Athens is only possible through bloody sacrifice and steeled determination.

“I would have you day by day fix your eyes upon the greatness of Athens, until you become filled with the love of her; and when you are impressed by the spectacle of her glory, reflect that this empire has been acquired by men who knew their duty and had the courage to do it.” -Thucydides, Pericles’ Funeral Oration

When faced with war, these soldiers chose death over dishonor, glory over cowardice. Pericles considers this bravery to be the truest form of a mans worth. He spends ample time detailing the fear that must have raced through their minds, and how they swiftly abandoned that fear for courage and valor. A rather eloquent and concise summary of a warriors sacrifice, Pericles subtly mourns the lost men while taking note of their willingness to lay down their lives for the homeland.
This message has been repeated through the ages. ‘We mourn them yes, but their sacrifice is not in vain…’ is a timeless message reappearing throughout thousands of years of human history. Pericles’ funeral oration is often compared to the Gettysburg address, where in 1863 former US president Abraham Lincoln reflected on the greatness of a nation that owed much to the sacrifices of dead men.
Despite the words of Pericles, Athens would suffer greatly in the coming years. The Peloponnesian war would continue for several years. Untold numbers would die and Athens itself would suffer a great plague and an eventual defeat at the hands of the Spartans. It is fortunate however that the great city would allowed to live and eventually recover.
Pericles’ funeral oration remains a poignant reminder that all things come at a cost. And while we might enjoy several luxuries within our own lifetime, there are often those who suffer selflessly on our behalf; falling again and again under the blows of outrageous fortunes so that we might live contently, peacefully. And if nothing else, we would do well to remember them…

“And when the moment came they were minded to resist and suffer, rather than to fly and save their lives; they ran away from the word of dishonor, but on the battlefield their feet stood fast, and in an instant, at the height of their fortune, they passed away from the scene, not of their fear, but of their glory.”- Thucydides, Pericles’ Funeral Oration