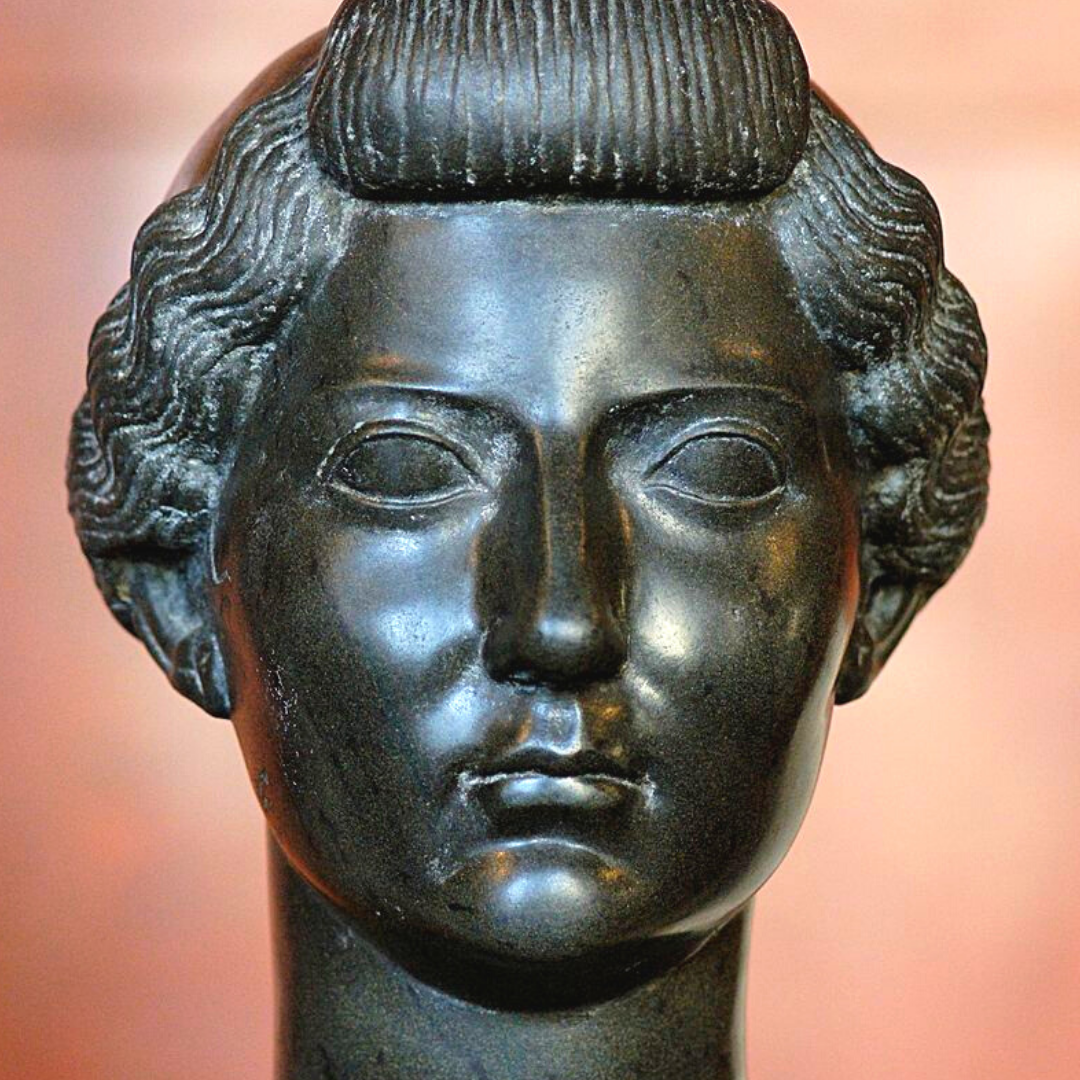 The Banishment of Julia Augusti (PART 2)

Written by Mary Naples, Contributing Writer, Classical Wisdom
Because the mere hint of sovereignty had dispatched his dear Uncle Julius into the hereafter, he never called himself emperor, preferring to use the term Princeps, or first citizen, instead. Regardless of his title, a de facto monarchy is what his regime—the principate—would become. But like all successful monarchies, Augustus needed heirs. And in ancient Rome only males would do.
With two sons already borne to the twenty-year old Livia, the newlyweds must have had high hopes for a long line of offspring of their own. But with the passing of each year, it would become all too obvious that the “troublesome” Scribonia had succeeded where the ever-imposing Livia would most acutely fail. As a consequence of the first couple’s sterility, the fate of the Julio-Claudian dynasty rested solely on the fertility of its female kin, three of whom played key roles in early dynasty-building.
Representing the Claudian contingency was Livia, with her two sons (Tiberius and Drusus) in tow. Dating back to the foundation of the Roman Republic, the Claudians might have been royalty if monarchy were possible in the Republic. Moreover, Livia was a Claudian by birth as well as by marriage. Typical in patrician families, Livia’s first husband and the father of her two sons was also her cousin.

The cast of a portrait of Livia Drusilla (Rome, Ara Pacis museum), wife to Augustus. From the collection of casts of busts showing the members of the Julio-Claudian dynasty. The original artwork is exhibited in the Ny Carlsberg Glyptotek (Copenhagen). Picture by Giovanni Dall’Orto, March 28 2008.

Because the people preferred the Julian clan, for public relations purposes, the nobility of Tiberius’s double-Claudian heritage was made much of during his reign. But if the Claudians were near to sovereignty in Rome, the Julians were near to it in the heavens. Their most recent deified son was Julius Caesar himself, canonized in 42 BCE amidst much fanfare.
The ever-politic Octavian made much of his being “the son-of-god” though neither was he truly the son of Caesar—Caesar had adopted his great-nephew Octavian just before he died—nor was Caesar truly a god. Besides Caesar, the Julians claimed descent from none other than Venus, the goddess of love—their ancestress and patron goddess, whose son Aeneas was the legendary founder of Rome—vividly portrayed in Virgil’s The Aeneid.
Hailing from the Julian clan was Augustus’s elder sister, Octavia Minor (69 BCE-11 BCE). A paragon of Roman womanhood whom the historians consistently lauded as having all the positive traits for a noble Roman woman: obedience, modesty, and devotion. Moreover, she was also fertile, reproducing five children in total; three with her first husband, Gaius Marcellus, and two with second husband, Marc Antony (83 BCE- 30 BCE).

At Octavian’s behest, in an effort to stabilize the troubled relationship between Antony and her brother, the ever-dutiful Octavia was married to Antony while still pregnant with her late husband’s child only months after he had died. When the lecherous Antony abandoned her in favor of Cleopatra, all of Rome was incensed but Octavia, never a hair out of place, displayed perfect dignity throughout.
Although linked to the Princeps by blood, Octavia’s children took second seat to the progeny of Julia—the principal player in Julio-Claudian family-planning. Even as a fresh-faced two-year-old, she was not too young to be used as a political pawn for her father. As part of the treaty of Tarentum (present-day Taormina) between Octavian and Antony in 37 BCE, Julia was betrothed to Antony’s son, Antyllus. Alas, not unlike the relationship between Octavian and Antony, Antyllus was to die prematurely. After the toddler was affianced to Antyllus, Octavian planned to betroth her to Cotiso, King of Getae (present-day Bulgaria).
Once again, plans fell through. In fact, it would take twelve years for another marriage scheme for Julia to hatch. By then, Octavian was the sole ruler of the Roman Empire and, as his only biological child, Julia’s every move was closely monitored under the glacial and exacting eye of Livia, who played quintessential stepmother to the spirited child.

In addition to her studies, Livia made sure Julia learned conservative and all-important feminine tasks such as weaving and spinning. With barely a moment of rest, the first couple was notorious for keeping Julia under wraps—allowing only those properly vetted to socialize with the sovereign’s daughter. Some, who Julia might have preferred, were sent packing after they failed the dreaded interrogation.
Such was the life of a princess, then at the ripe old age of fourteen, Julia was wed. Although Augustus (his handlers coined the term for him in 27 BCE) may have preferred to think of himself as the emperor who transformed Rome from a city of clay to one of marble, the truth is his real talent lay in arranging marriages. The Princeps had just the match for Julia, his beloved nephew Marcellus—the next best thing to a son.
Long the emperor’s favorite, the double-Julian marriage of the seventeen-year-old eldest son of Octavia’s to his first-cousin Julia put him in line as heir and chief successor to the Princeps. In setting up the match, Augustus had acted against the fierce protestations of Livia who was none too pleased about this turn of events. She had garnered hopes for her eldest son to be in the line of succession but, although the same age as Marcellus, the somber Tiberius—never a favorite of the Princeps—paled in comparison to the charismatic Marcellus.
Facebook