The Odyssey XI: The Book of the Dead

Book XI, The Book of the Dead, or the Nekyia, is one of the more self-contained chapters in The Odyssey. So much so that it actually feels like it has been included for its own sake rather than any necessity of plot development.
But why would Homer go to all this trouble? Well, partly to increase the glory of Odysseus, a glory reflected by the increase of his kleos or ‘what people hear about you’. In this instance people are told that Odysseus is a hero who has, quite literally, been to hell and back. 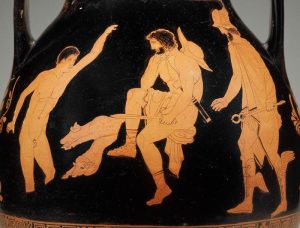 Not only is the feat extraordinary in itself, but puts him in an elite group of death-defying heroes along with Heracles who, for one of his twelve labours, was forced to fetch Cerberus, the three-headed guard-dog, from the halls of Hades.
Perhaps the more dominant reason for the descent is so Homer can indulge himself (and the reader) with a long line of impressive and entertaining cameos from dead heroes’ past.
In order to speak to the bodiless ghouls Odysseus must dig a pit three cubits in each direction and pour into it honey and milk, sweet wine, water, white barley, and the blood of freshly sacrificed sheep. This exotic cocktail is then drunk by the ghosts so they can speak truthfully to the living.
The first deceased soul to address him is, surprisingly for Odysseus, one of his own crew, Elpenor.
This foolish crewman never made it off Circe’s island as, after falling asleep drunk on her roof, “never thought, when I went down, to go by way of the long ladder, but blundered straight off the edge of the roof , so that my neck bone was broken out of its sockets”.
Odysseus’ interaction with Teiresias, his whole purpose for being in the house of Hades, lasts only 60 of the 640 lines of the book. In these lines our hero learns how he must appease the vengeful god Poseidon, but only after the restoration of his oikos (household).
Then comes his mother, “whom I had left alive when I went to sacred Ilion (Troy)”. She tells him of the fidelity of his wife Penelope, and the development of his son, Telemachus.
These formalities quickly dispensed with, Homer brings through a procession of fine and fascinating characters; a veritable who’s who of the heroic Greek world.
First come the wives and daughters of princes: Tyro, Antiope then Alkmene – mother of Heracles. Next his wife Megara then the mother/wife of Oedipus, Epicaste. Chloris is followed by Leda, the lover of Zeus in swan form, Iphimedeia, Pahidra and Procris. Next, the daughter of Minos and wife of Dionysus, Ariadne. Finally come Maira, Clymene and “Eriphyle the hateful”.
It should be stressed that this underworld excursion is narrated, not by Homer, but by Odysseus to Alcinoos and Arete, the king and queen of the Phaiakians, who are entertaining the shipwrecked hero following an unfortunate run-in with Poseidon. 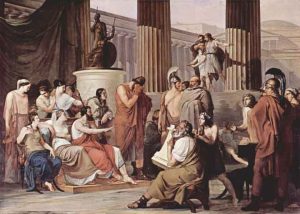 Odysseus at the house of Alcinoos

At this point in his narrative he shows great showmanship by declaring, entirely out of the blue, that it is time for bed. This prompts Alcinoos to implore him to continue, culminating in praise of his integrity: “Odysseus, we as we look upon you do not imagine that you are a deceptive or thievish man, the sort that the black earth breeds in great numbers, people who wander widely, making up lying stories”.
The significance of this description is huge as “wily Odysseys, master of stratagems” is famed for, and proud of, being a first-rate liar. This has led scholars to debate whether the stories he tells the Phaiakians (including those of the Cyclops, Circe, Calypso, the Sirens, Scylla and Charybdis) are pure fantasy made up on the spot by a mythomaniac.
Odysseus, as a good guest must, continues to spin his yarn.
He talks of meeting the Greek high-commander Agamemnon, fresh from the literal blood-bath he met on his homecoming from Troy at the hands of his cousin Aegisthus “with the help of my sluttish wife” (i.e. Clytemnestra). This encounter is used to highlight the difference between the virtuous Penelope and the unfaithful Clytemnestra.
Agamemnon also warns Odysseus against an ostentatious return, instead urging him to enter Ithaca by stealth.
The next star turn is taken by the mighty Achilles who claims “I would rather follow the plough as thrall to another man… than be a king over all the perished dead”.
This seems to directly contradict his choice early in life when told he could either die young and famous as the hero of Troy, or old and unknown amongst his family. Scholastic interpretations state Achilles is either repenting his choice of war over peace, emphasising just how ghastly the underworld actually is, or simply talking rubbish. 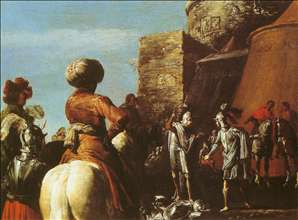 The quarrel between Odysseus and Ajax

Other dead heroes we meet are Achilles’ lover Patroclus, Antilochus and the mighty Ajax who shows great tenacity in grudge holding by refusing to talk to Odysseus following a quarrel they had at Troy: “Ajax, son of stately Telamon, could you then never even in death forget your anger against me”.
In addition to glimpses of Minos, Orion, and a quick chat with Heracles, Odysseus also sees the really grisly side of the underworld in the guise of three of the damned:
“I saw Tityos, Earth’s glorious son, lying in the plain, and sprawled over nine acres. Two vultures, sitting one on either side, were tearing his liver, plunging inside the caul.”
Next there is Tantalus, standing in a pool of water and under wonderful fruit trees. “Every time the old man, trying to drink, stooped over, the water would drain away….each time he would straighten up and reach with his hands for the fruit, the wind would toss them away”.
Finally, Sisyphus, doomed to failure in his task of pushing a great boulder up a hill, day and night, for all eternity.
Odysseus, despite his courage and curiosity, makes a sharp exit as “the hordes of dead men gathered about me with inhuman clamour, and green fear took hold of me”.
His macabre myth-making complete, our hero returns to the realm of mortal men, to the ultimate goal of reclaiming his oikos. He has seen enough of the dark and dreadful halls of Hades, certainly enough to avoid a premature return.
Instead his job is to stand proud in combat beside his son and loyal servants and add the 108 shameless Suitors to the wretched ranks of fleshless ghouls.
Facebook