Pseudoscience through the Ages: From Delphi to Tarot | Classical Wisdom Weekly 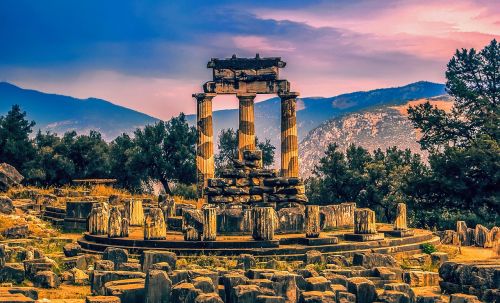 Pseudoscience through the Ages: From Delphi to Tarot

Pseudoscience was seen differently in the ancient world than it is today, but many of its ancient practices continue to this day. Ancient disciplines of divination, such as astrology, have yet to be validated by modern science yet astrology continues to hold sway in the modern world.

In the ancient world, the Oracle of Delphi was one of the most celebrated intuitions. The Pythia of Delphi at the Temple of Apollo was the most sought-after woman in the world, attracting powerful figures such as governors, senators, and even the kings and emperors.

They would visit Delphi seeking knowledge about their personal lives and that of their empires. The Pythia often made sweeping predictions and would speak about empires and kingdoms as a whole entities unto themselves.

The Oracle at Delphi

The method in which Pythia allegedly saw the future was kept secret, and little is known about how she made her predictions. Most ancient historians agree that she would sacrifice a lamb and read the internal organs of the animal to make predictions on a specific question. She is not known to have heard any prophetic voices.

Interpreting the insides of the slaughtered animal may seem like a rather unreliable method of predicting the future, but according to historical records, it seems she did make some accurate predictions. The ancients staunchly believed in her prophecies, making her famous.

When Rome was defeated at the Battle of Cannae, the Senate of Rome sent a delegation to the Delphi to ask whether they should surrender or keep fighting. The Pythia was held in high regard in Greece and Rome. Even emperors such as Nero went to Delphi to enquire about their future as emperors. Eventually, Nero executed her for saying something he didn’t like and the institution slowly started losing its importance. The introduction of Christianity in the Roman Empire led to its complete elimination.

Reconstruction of the sanctuary of Apollo at Delphi, by Albert Tournaire, 1894

However, the practice of seeking guidance from the higher source, or the universe, has continued throughout the ages, and many people still believe there is some truth to this. Science has revolutionized the way we think to such an extent that many find divination practices a thing of the past and disregard it as pseudoscience.

Before the internet, psychic readers were consulted by those who believed in this practice. Such readings were largely shunned or even equated with attempts at magic or sorcery. Many people used to label psychics as witches or warlocks, and prosecuted them in the past. Others called it a con game.

With the advent of the internet, however, YouTube tarot readers have gained huge popularity in the recent few years. YouTube has monetized the videos and many tarot readers have found a genuine way of living by regularly uploading free tarot readings for the 12 astrology signs.

The Tarot readers claim to connection to the “source,” or the universe, and interpret Tarot cards for those seeking guidance. The Tarot is ancient divination practice that some believe dates all the way back to ancient Egypt.

Each tarot deck has 78 cards that are shuffled and arranged in different positions according to a specific situation. The cards are then used to interpret the past, present, or future of a situation. Whether or not you consider Tarot readings valid, it is interesting that the internet has made the practice much more widespread.

While the Pythia of Delphi used to inspect the internal organs of the animals, modern YouTube tarot readers inspect a deck of cards that contain ancient archetypes. Both claim to consult the source, the higher power, or the universe, for guidance.

The core belief behind the modern YouTube tarot is no different from that of the Oracle of Delphi at the Temple of Apollo: that of connection to a greater intelligence and the ability to transmit that knowledge.

Today, YouTube tarot readers can also do a reading on a country or a political leader’s future. Only the medium has changed, as the internet has made it possible for tarot readers to reach hundreds of thousands of people.