Written by Visnja Bojovic, Contributing Writer, Classical Wisdom
After having arrived home from the supermarket, I was just able to sit and stare blankly at one spot for one hour, wondering where the empathy and consideration have gone. When has it become normal to buy 10 bags of flour, or 40 packs of antibacterial wet wipes when a person behind you is left with none? Haven’t we learnt anything from the past?
Yes, the situation in which the world has found itself these days is scary, and yes, it is serious. However, please be reminded that we live in the 21st century, when it is possible to identify diseases that killed people 2000 years ago, not to mention the modern ones. We live in an age in which we can measure our body temperature in less than five minutes, in which we have the second person cured from HIV!
So, take a deep breath, sit at home with your family, take all the prevention measures expected of you, watch a movie, and be grateful for living in an age in which you can rely on experts doing their job.
People of ancient times did not have the same privilege, though. Let’s forget about our worries for a second and take a look at the struggles that the people in ancient Rome were facing. 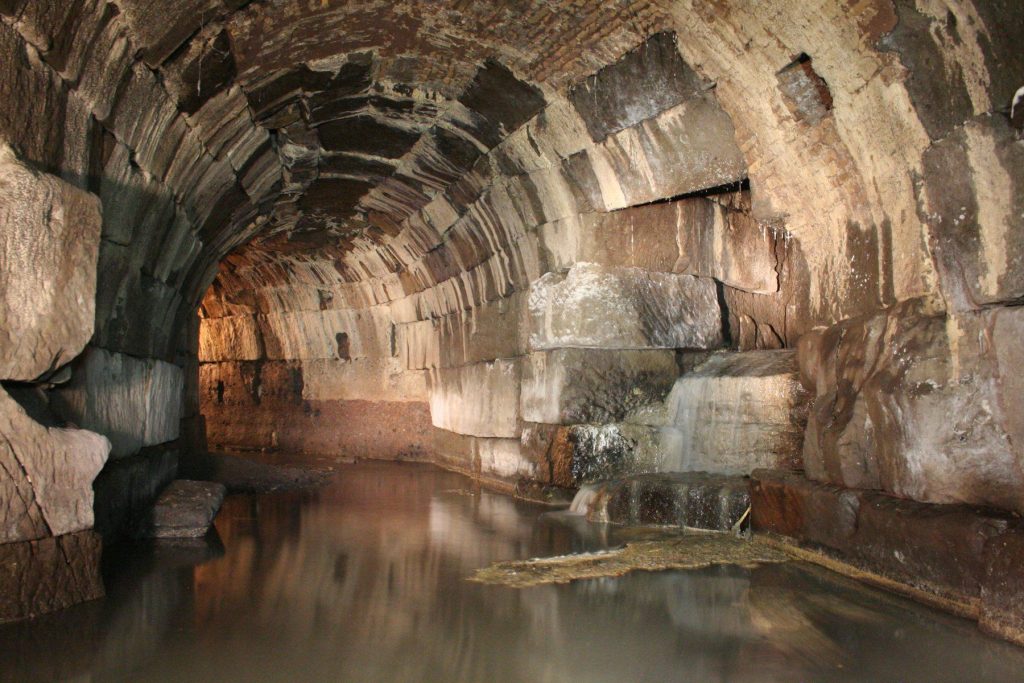 The first Roman sewer system called the Cloaca Maxima was built in the sixth century B.C. It started out as an open channel but was eventually closed and vaulted. The Cloaca Maxima is the oldest sewer system still in use today with some of its original masonry work still existing. (SOURCE)

Romans are still well-known for their advance in hygiene in comparison to the cultures preceding them, along with their sanitary innovations such as the sewage system and public toilets. What is less known, however, are the challenges that those innovations brought with them.
Public baths
As the majority of the Roman population could not afford private baths, they came up with public baths, or thermae. As bathing was an important part of Roman culture, these public baths became the center of socialization for the Romans. Therefore, it was expected to visit them regularly.
Even though bathing sounds like the best method of prevention when it comes to bacteria and disease, in ancient Rome it was quite the opposite at times. The problem with these baths was that the water was rarely changed, hence the dirt in it was kept warm, and as such, was fertile ground for bacteria. Moreover, doctors used to prescribe baths to patients, which led to the sick and healthy often bathing together.
Sewer system and public toilets
The Roman sewer system was considered one of the biggest sanitary achievements of ancient times. However, more recent researches (particularly those of Koloski-Ostrow and Jansen) have shown that Roman toilets were not as common as it had been previously thought, and that they did not offer that many benefits. Quite the opposite, in fact.

Remnants of an Ancient Roman latrine in Ostia Antica

It was discovered that Romans were in some kind of fear of public toilets. This is supported by the smaller number of graffiti on the walls, as well as the high number of shrines to goddess Fortuna, who was believed to protect toilet users from bad things happening there.
One of the biggest problems that Roman toilets had was the lack of protection from flies. This made human waste easily accessible to flies, which then made the spread of the pathogens very easy (not to mention the fact that human waste was (overly) used as a fertilizer). Another threat were rodents that could have easily lurked into toilets and homes, naturally contributing to this spread.
There was no official cleaning service when it came to public toilets, which naturally meant the neglect of proper care. This led to sewage pipes being more than often blocked by the amount of waste, which then led to people throwing waste on the street, and excrement-filled water flowing upwards during flooding.

Artist’s impression of Roman toilets at Housesteads Fort on Hadrian’s Wall. It may seem very surprising today that there was no privacy in Roman toilets. People used sponges on sticks instead of toilet paper. (SOURCE)

Last but not least, we should mention the Roman version of toilet paper. It was called xylospongium or tersorium and it consisted of a wooden stick and a sea sponge. They were used by everyone in the public toilet, and washed simply in a bucket of water and salt/vinegar. This wasn’t exactly the greatest hygienic practice that the world has ever seen, so naturally, the bacteria thrived in these sponges as well.
Diet
A research on parasitology conducted in 2016, by Piers Mitchell, showed that the presence of the fish tapeworm, an infection caused by a parasite Diphyllobothrium latum, increased significantly in Europe under the Romans. Mitchell suggests that this happened due to the Roman dietary customs.
A popular Roman dish called garum was a type of sauce whose main ingredient was fish. As the presence of the fish tapeworm was found in other areas of the Roman territory, there is a great possibility that garum made in northern Europe contained fish infected with this parasite. With the evidence of manufacture, transport and sale of this food, it is probable that this infected people outside of the area typical for the disease. 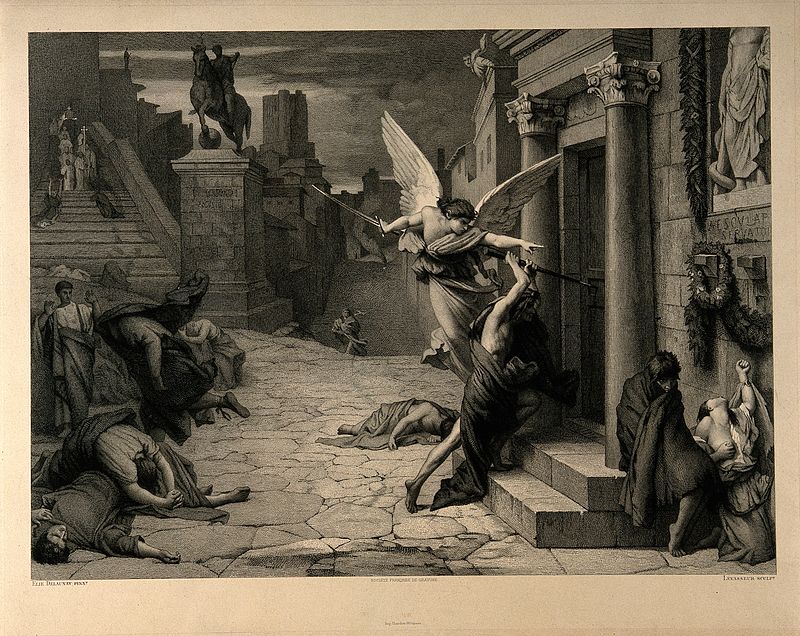 The angel of death striking a door during the plague of Rome; engraving by Levasseur after Jules-Elie Delaunay

Don’t Forget Your Humanity
These are only some of the problems that the residents of ancient Rome were facing. We can now read this information with the sigh of relief and gratefulness to our ancestors for overcoming all these challenges.
However, we should not forget one thing – no science and advancement can save us from the lack of humanity. There is not an innovative scientific method that will prevent some people from buying one-year worth stocks of toilet paper, without thinking if someone else will need it. The moral of the story is: trust medicine, be responsible towards yourself and others, and don’t only keep calm, keep consideration and compassion.
Facebook