The Evolution of the Man in the Marble

The artwork, and specifically the sculptures, of ancient Greece were some of the most profound, artistic statements of the human form ever to emerge from society. The dedication to detail, intricacy and exemplifying the beauty of the human body was unmatched at this time. However, like all art, it was a process of slow and deliberate evolution that created the beautiful depictions of the human body that we have all come to love, and the evolution of the man in the marble is just as intriguing as the finished product. 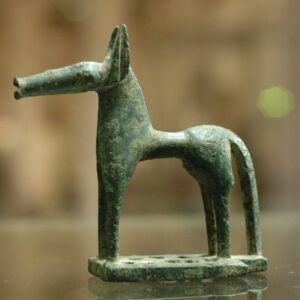 sculpture of a horse from the geometric period

Not much is really known about this period of Greek art, as there is no writing found from this period to describe the artwork. The sculptures created were often very small objects like chariots and horses. Many of the pieces were placed in tombs and not intended for public display. It is possible that larger sculptures made at this time were constructed from perishable materials, like wood. This period was believed to have lasted from about 900-700 BCE.

The archaic period was believed to have lasted from about 700- 480 BCE. This era saw the first depictions of the human form. These sculptures were not the beautiful, idealized depictions that would be produced later, but instead the bodies were usually stiff and rigid. The principle sculptures at this time were given the generic term of kouros, a simplified, nude sculpture of a male youth, and kore, which was a depiction of a female youth who was normally clothed.

a male nude would be none as a “kouros”

These statues were simplified, forward facing and lacked extensive detail. They were  believed to have been influenced by the cultures of Egypt and south west Asia. The korous and kore would often be depicted smiling, which was uncommon for later sculptures. These statues would lay the ground work for later masterpieces of ancient Greece. 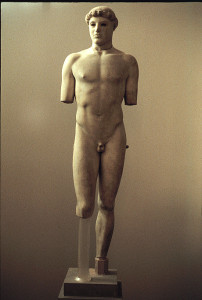 The classical period is thought to have begun with the sculpture known as “The Kritios Boy” in about 480 BCE. This sculpture was one of the first to depict the human form in a very realistic way. The body was sculpted to reflect accurate human proportions. The marble appears as if there are defined muscles covered by taut skin, while the sculpture itself appears to be displacing its weight on one hip. This is known as a contrapposto stance and it represented a significant innovation in the representation of  human beings. While the Kritios boy is regarded as the start of the Greek classical period, it in no way encompasses the entire period. 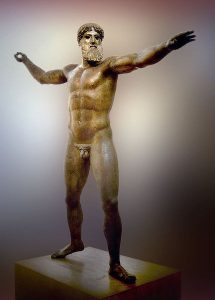 The classical period saw the rise of brilliant artists like Polyclitus, Lysippos, Scopas,and Praxiteles. They all contributed to the innovation and realism that would come to constitute the Greek classical period. It is during this time that we see an obsessive eye for detail and, at times, an exaggeration of the human body. Many idealized statues can be seen with muscle definition and limb proportions that are unattainable by a human being. Many of the portrayals are god-like creations that would have been larger than life when compared to the average citizen of ancient Greece. Unlike the Kritios boy, which was faithful to the human form, later sculptures were heroic looking creations that captured the imagination.

the Hellenistic period would see a dramatic rise in artistic innovation in the expansive area conquered by Alexander the Great. This period is believed to have lasted from about 323-1 BCE. Although the influence of Athens, and other centers of artistic innovation during the classical period, began to decline; the influence of the eastern Mediterranean was on the rise.
While the classical period focused on idealized forms often depicted in cool, simplified stances; the Hellenistic sculptures focused heavily on sharp contrast and dramatic surroundings to create an engaging environment within the marble. The sculptors focused on the backdrop around the human subject as much as the subject itself. Figures were not always shown standing, contrapposto or otherwise. They were often seen laying down, leaning against objects, or even writhing in pain.
The Hellenistic period also saw the depiction of subjects that were less than idealized. Sculptures of humans that were old, deformed, or even dying came about during this time. In addition, it was common that the sculptures told a story. Laocoon and his two soon

“Laocoon and his sons” is perhaps the best example of Hellenistic style. The sculpture reflects a dramatic scene from The Iliad. Laocoon was a Trojan priest who attempted to warn his citizens about the dangers of  accepting the Trojan horse.  Subsequently, he, along with his sons, were devoured by a serpent, at the bidding of Athena who favored the Greeks.
Notice the powerful representation depicted. The sculpture is not a simple, standing figure, but a sharp portrayal of an event. There is believable pain displayed across the faces of the marble men. Their suffering becomes ours as their story is told to us.
Facebook