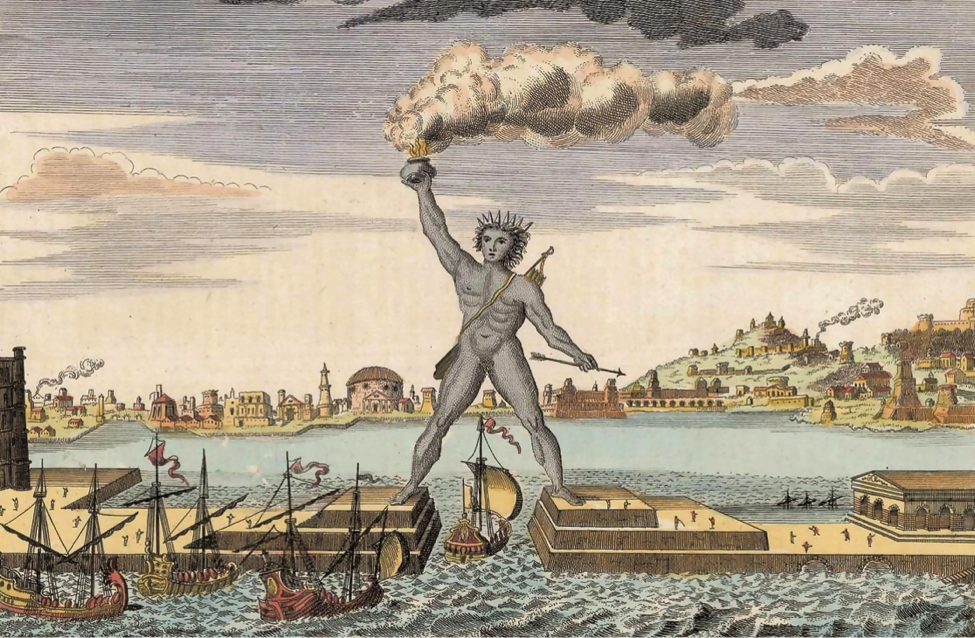 The Colossus of Rhodes… Coming back to life?

By Jocelyn Hitchcock, Contributing Writer, Classical Wisdom
Considered one of the Seven Wonders of the Ancient World, the Colossus of Rhodes was a feat of ingenuity and engineering and served as a Rhodian symbol of victory.
The Colossus of Rhodes was erected in 280 BCE but was toppled by an earthquake in 226 BCE. The monumental statue remained fallen until 654 CE, before it was ultimately victim to destruction, fragmentation, and looting… and now, there is a chance it may be resurrected once more.
The Colossus of Rhodes: A Victory Statue
Located off the modern day coast of southwestern Turkey in the Dodecanese islands, Rhodes has been a major commercial hub throughout its history. The Hellenistic Period on Rhodes, when the Colossus of Rhodes was built, witnessed a flourishing of its economy and maritime interactions. Philosophy, science, literature, and art all found homes in Rhodes.
Then, in 305 BCE Antigonus I Monophthalmus dedicated to attack. In a power struggle over who should get to rule Rhodes after Alexander’s death, Antigonus sent his son Demetrius to capture Rhodes and secure it against the opposing Ptolemy and Seleucus factions. The capital of Rhodes was fortunately protected by a wall and required Demetrius to construct two separate siege towers to overcome it. Ultimately, both sieges were unsuccessful and a fleet from Egypt arrived to help defend Rhodes from Demetrius.
The conflict ended with a peace treaty and the people of Rhodes viewed it as a personal victory. 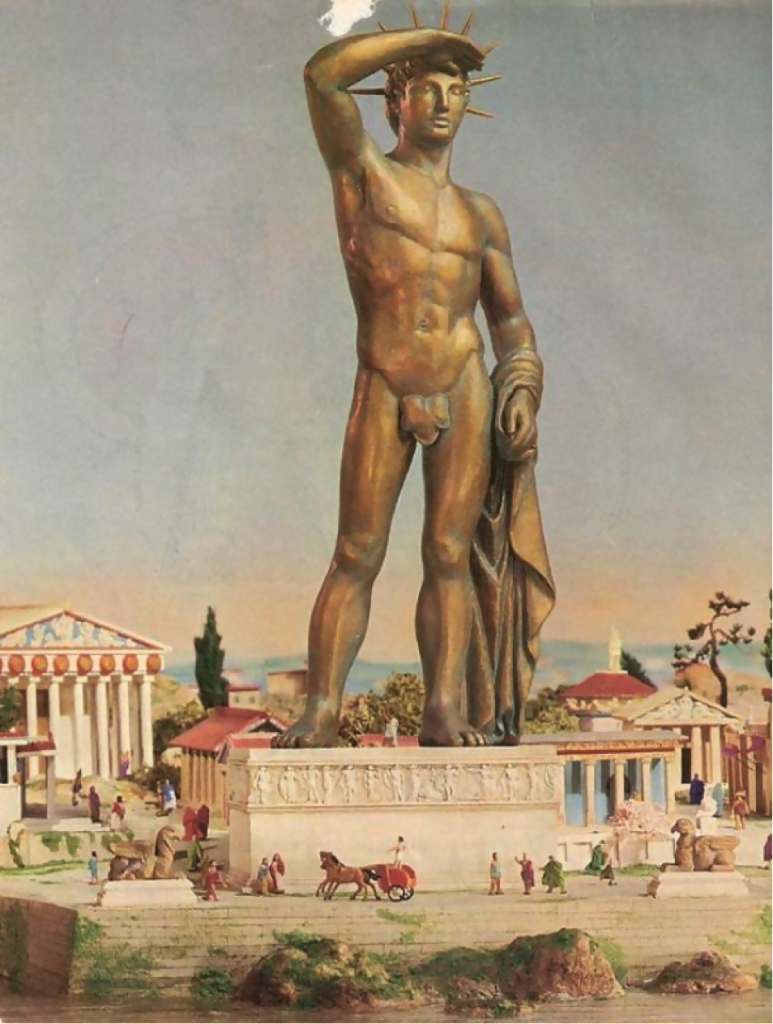 The Colossus of Rhodes

To commemorate their successful stronghold against Demetrius, Rhodes decided to erect a statue in honor of their patron god, Helios. According to Pliny, the Colossus took 12 years to build and was started in 292 BCE. Sculptor Charles of Lyndus was the artist behind the statue, but legend holds that he didn’t live to see its completion.
Construction of the Colossus of Rhodes
The Colossus of Rhodes was said to be 105 feet tall, made of Bronze paneling, and internally supported by columns and iron. Construction of such a statue was of course a feat in itself and several theories have been presented as to how such a work was completed. Scaffolding and earthen ramps have been used to complete the Colossus, but it is pure speculation.
Some scholars, both ancient and modern, postulate that the statue was cast in situ. They suggest that an earthen mound was built up around it as the workers went in order to reach the height of the Colossus as it is described by Philo of Byzantium. 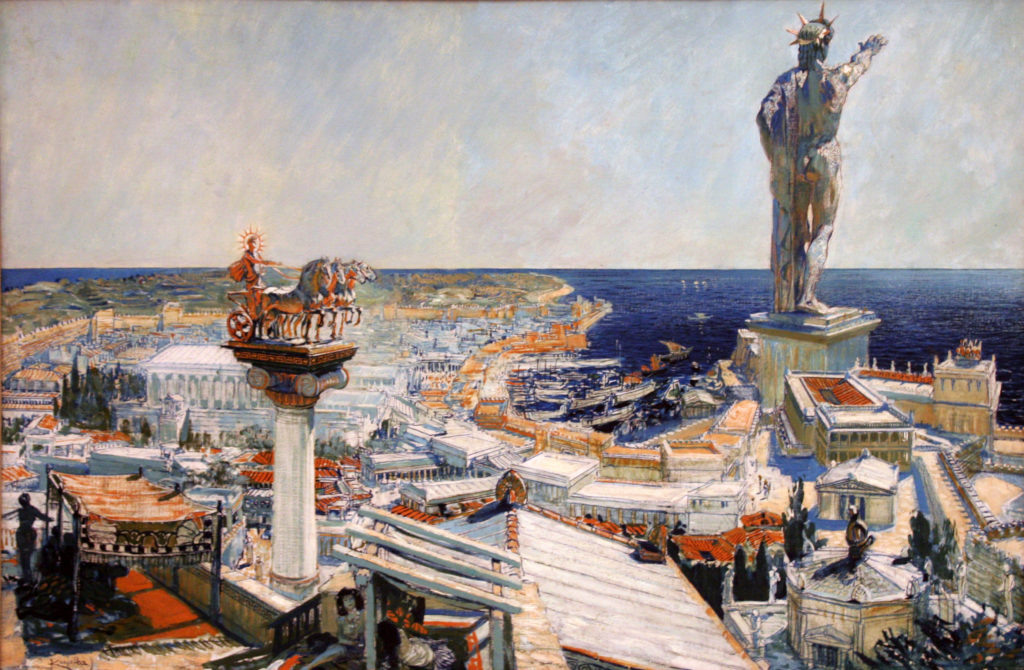 An oil painting representing the ancient city of Rhodes by Frantisek Kupka (1906 CE).

Additionally, the positioning of the statue itself is unclear. We like to imagine that the Colossus straddled the harbor entrance, acting as a guard and port of welcome to visitors, inciting both respect and a bit of fear. However, this is not certain.
The Fall of The Colossus of Rhodes
As impressive as the statue was sure to have been, it only stood for around 54 years. In 226 BCE an earthquake rocked the region and the statue toppled to the ground. Strabo saw the fallen statue in his travels and wrote that, “he broke down by the falling from the knees,” and noted the Rhodian people did not restore it because an oracle instructed them not to do so. The colossus remained in this downtrodden position for nearly 800 years, when, according to Theophanes the Confessor, the statue was melted down and sold for its metal parts to merchants.

Potential construction for a replica

The Resurrection of the Colossus of Rhodes?
In the last few decades there has been a debate on whether or not to rebuild the Colossus of Rhodes. The project’s proposal states that the rebuilding of the Colossus would, “draw the attention of all humanity to our island [Rhodes], not purely motivated by a feeling of irredentism, but by creating a memorable cultural contribution of Rhodes.” The 2015 collective of architects, archaeologists, and civil engineers proposed to reconstruct a statue that would not only be much larger than the original, but would serve as a cultural center and lighthouse.
While we don’t know if this will happen or not, it would definitely be an astonishing feat… and a fantastic opportunity to see one of the seven wonders of world come to life again.
Facebook

Posted in Sculpture - No comments