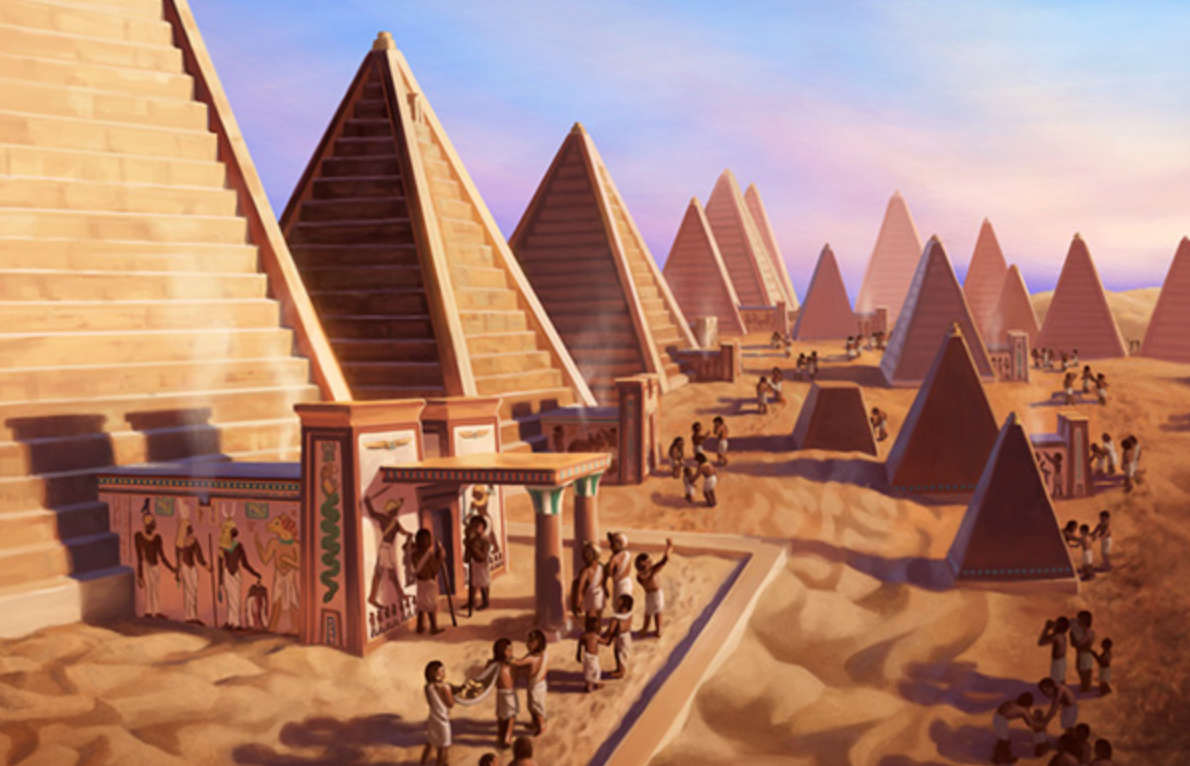 Written by Ed Whalen, Contributing Writer, Classical Wisdom
We are all familiar with the pyramids of ancient Egypt and Mesoamerica, but few people are aware of the pyramids built by the remarkable African people in what is now North Sudan. The Nubian pyramids are a very important part of the heritage of Africa and provide a remarkable insight into the history of the continent.
The History of Nubia
The Nubians were an ancient people and were well-known to the Egyptians, who at times dominated them politically. They lived in a region that lies today mostly in Northern Sudan. Nubia was heavily influenced by Egypt but developed a distinctive culture. The first great Nubian kingdom was the Kerma kingdom. Later, the Kushite Nubian kingdom dominated Egypt. Expulsed by the Assyrians, the Nubians fell back beyond the First Cataract of the Nile and established a kingdom at Meroe (c 550 BC-500 AD).
This period marked something of a Golden Age for the Africans. It seems that the Nubian kingdom came briefly under the control of the Persians and the Ptolemies but for the most part, Nubia was able to maintain its independence and culture. Their religion, however, was almost identical to that of the ancient Egyptians.
In the first century AD, under Queen Kandake the Nubians fought the Romans to a standstill. During the third century AD, Nubia was Christianized by Egyptian monks and merchants. At about the same time, the Kingdom of Meroe was invaded by  invasion from Aksum (Ethiopia) and split into three smaller kingdoms. In the seventh century, the Christian kingdoms successfully resisted the Arabs and enjoyed great prosperity and peace. Nubia was finally conquered by Mamluk Egypt in the 14th century AD.
The Nubian Pyramids
The pyramids were mostly built between 300 BC and 300 AD. There are an estimated two hundred pyramids in Northern Sudan, if not more—far more numerous than in Egypt. They were built by Nubian kings who, like the Pharaohs, were seen as divine. The kings and queens of Nubia were buried in these structures. They were interred with vast amounts of gold and other precious metals and most likely mummified. Sadly, these royal tombs were all looted long ago.
The Pyramids of the African kingdom are markedly different from their northern neighbors; they are much narrower and have an incline of about 70 degrees, a much steeper angle than those at Giza. The Nubian pyramids are composed of tiers of laid stones blocks, that are roughly six to 10 feet in size.
Perhaps the most distinctive feature of the structures in Nubia is that they include what has been interpreted as an offering temple. These temples are decorated with iconography that is uniquely Kushite. Here, monarchs were buried for centuries. The vast majority of the pyramids are located at three sites, the most important of which is the former royal seat of Meroe, where there are 50 tombs. Another important site is Nuri. Curiously, archaeologists have found rocks that ring when struck and believe they may have been used in rituals.
The Importance of the Nubian Pyramids
These structures stand testament to the wealth and power of ancient Nubia. As the burial place of the dead monarchs, they were central to the Nubian religion. Priests often performed sacrifices and rituals honoring the deceased monarch in the offering temples at the base of the pyramids. It is believed this was done in the hopes that the dead king or queen would intercede with the gods on behalf of their former subjects.
The Nubian pyramids required immense resources and labor and as such, they likely contributed to the development of the state. While these structures were undoubtedly influenced by Egypt, they were equally an expression of national identity. The Nubians appear to have revived the building of pyramids centuries after the Egyptians abandoned their construction. Why this was the case no one knows. It is possible that as ancient Egypt came under Macedonian and later Roman rule, the Nubians saw themselves as the heirs of ancient Egyptian civilization and this led to the revival in pyramid-building.
The Decline of the Nubians Pyramids
The last Nubian pyramids date to the third century AD. After this, they abruptly cease, which may be related to the decline in the power of the Meroite kings and queens. The region was also becoming increasingly Christianized. As monarchs adopted Christianity, many customs and practices—including the interring of monarchs in tombs—were left behind.
After the conquest of Nubia by the Egyptian Mamluks and later the Ottomans, the region became Islamic and the tombs buried under the sands of Sudan. They were discovered by European explorers in the 19th century and excavated by archaeologists, who study them for insights into the Nubian society and civilization.
Conclusion
The pyramids of Nubia are among the wonders of the ancient world. They were a product of a unique and very successful civilization deeply influenced by ancient Egypt but also distinctively its own. The pyramids played a crucial role in the development of Nubia and were a crucial part of their religion. Today, they are becoming increasingly popular with tourists and more tombs may even be unearthed in the future. However, the pyramids are at risk of flooding and neglect, raising concerns for the future of these ancient wonders.
References:
Lacovara, P., 2018. Pyramids and Obelisks Beyond Egypt. Aegyptiaca. Journal of the History of Reception of Ancient Egypt, (2), pp.124-137.
Emberling, G., 2011. Nubia: ancient kingdoms of Africa. Institute for the Study of the Ancient World at New York University.
Facebook