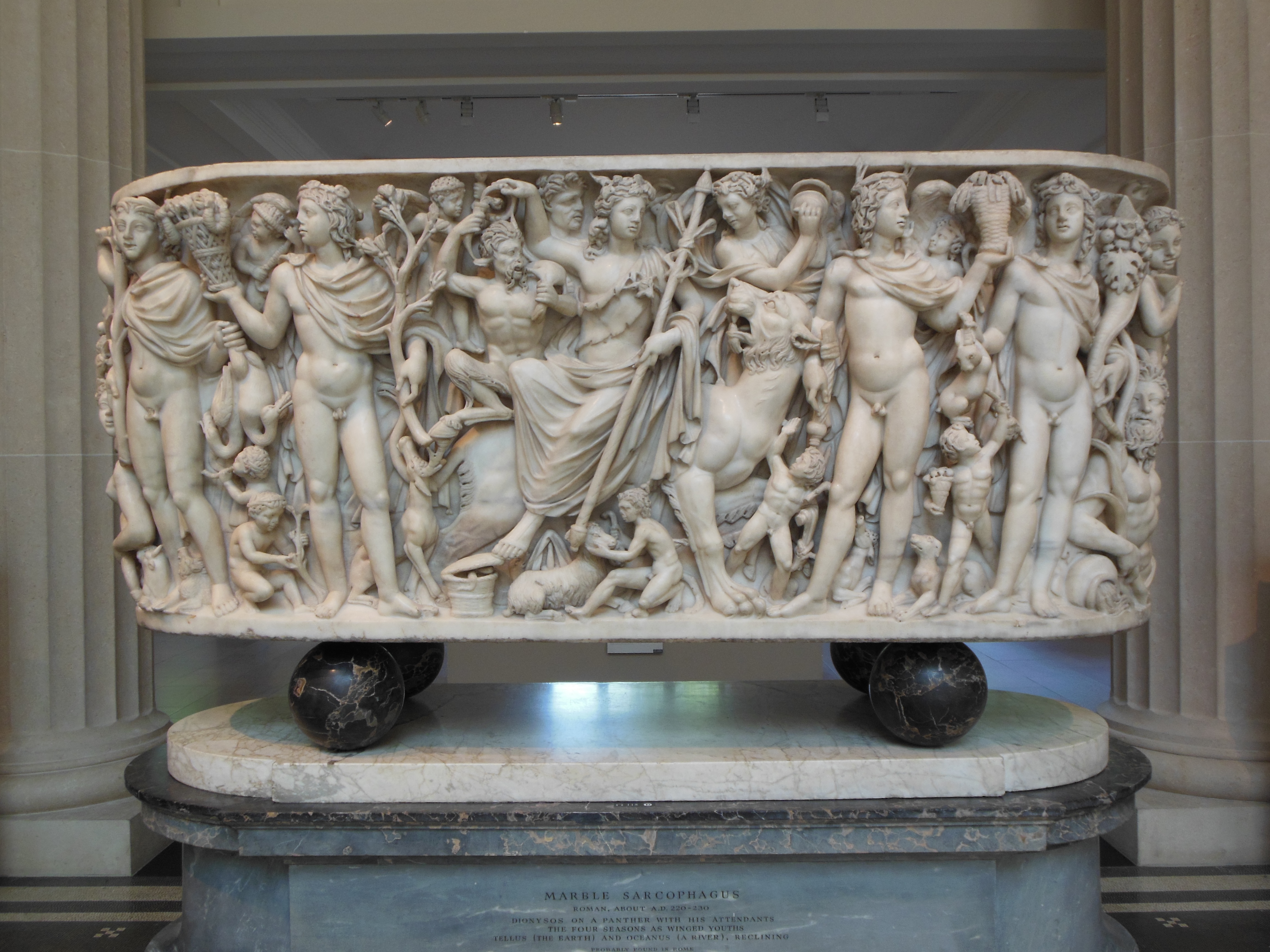 From 125 to 450 C.E. Romans thought it fashionable to buy stone coffins in which to inter their dead. The coffin was an oblong stone box approximately six feet by three feet and three feet in height with an interior cavity for the deceased. On the front and sides, beautiful sculpture advertised the interred’s beliefs. Scholars refer to these coffins as lithos sarcophagi (Gk. lithos = stone, sarx = flesh, phagein = to eat), for as time passed, all that would remain of the deceased were teeth and bones.

Battle of the Greeks and Amazons, Rockefeller Museum, photo by Barry Ferst

In 1984, with a teaching position in philosophy secured, my wife and I embarked on the Grand Tour of Europe. After coming across a few sarcophagi, I realized that the sculpting on sarcophagi provided access into the aesthetic sensibilities and religious beliefs of the peoples of the Roman Empire. Because of our interests in Western art and Greco-Roman culture, future travels meant the search for sarcophagi.

I have driven a hundred thousand miles across four continents visiting antiquities museums, churches, baptistries, archeological sites, catacombs, art galleries, necropoleis, castles, fortresses, palaces, and villas—any place that might have what I was after.

I found sarcophagi re-used as flower boxes, water troughs, cisterns, altar tables, wall décor, and once, as corner blocks on an Ottoman fortress. Sometimes, completely by chance, I found a sarcophagus beside a parking lot or under a clutter of bushes.

My travels began before digital cameras, so photos taken in museums—“No flash! No flash!”—recorded the object but not with the best of clarity. With the advent of digital, CMOS cameras, photos were greatly improved.

Like pre-Nikon digital, my first adventures relied upon the old-fashioned fold-out map. Pulling into the northeastern French city of Reims and trying to find the cathedral by map actually meant looking for the towering spires, hoping that the Abbey of St. Remy was nearby–or following Centre Ville to locate the little brown tin sign that would signal the path to the city museum.

But after such searches came the wonders of GPS. Okay, how to use the Peugeot’s GPS—there must be a manual somewhere—and how to get that woman in my dash to speak in English?

Though I like to have two sources identifying the location of a sarcophagus, sometimes the source is Baedeker-19th-century tour book that claims: “At Ajaccio on Corsica there is a Bacchus sarcophagus.”

But is there really, and better yet, just where?  Is it at the Fesch Museum, the Prefecture, or the Hotel de Ville? Once a parking space was located—in Europe, this is almost as difficult as locating a sarcophagus—it was off to the Fesch, which soon revealed itself as a fine arts museum. My next attempt takes me to the Prefecture, but soldiers at the gate bar the way. In time, I learn of a side entrance for visitors with papers.

I have no papers, but every entrance has to be tried. I locate a door which opens onto a small room with two functionaries behind a glass partition. I ask, “Is there a sarcophage romain here?” and receive a “oui”, followed by “non!” Okay, that is actually progress. I explain who I am and what I need. Again, a “non” — only sterner this time — from someone rapidly transmogrifying into a vengeful Medea.

With my third attempt, hostility fills the room, and given that this is a government building I figure that I am about to get arrested. However, I see Medea saying something to an acolyte, so I sit down with a glimmer of hope, though still concerned about an impending arrest. Five minutes later, a smiling woman emerges from a doorway and says, “Please let me show you this wonderful sarcophagus we have.”

At Narbonne in southern France I meet a helpful construction foreman at Our Lady of Mourguie Church Lapidary Museum that was officially “Ferme pour Restauration”. Scaffolding, brick and wood, tools and machinery lay about, and everywhere warning signs and yellow caution tape. After a few minutes of explaining my quest, the foreman stops all work and I take my photos amid the dust and dangling electric wires.

Florence’s Uffizi Gallery forbids photography, so when I take out my Nikon I am suddenly surrounded by guards shouting “Niente foto”. With Italian limited to “dove” and “voglio”, I want to believe “Niente foto” sounds like “go ahead”, but as I raise my camera, I am swiftly corrected.

Later that afternoon, I fax a letter to the director of antiquities. By what I am sure constitutes miraculous intervention by a local patron saint — for this is Italy and “autorizzazione” could take months if not centuries — by return fax I am told to come and photograph next Monday, when the Uffizi will be closed.

I spend two hours with a museum docent and am just finishing when an ancient curator totters out with an even older key and opens a door, behind which is a dusky closet-size room containing four ornately carved sarcophagi!

Bacchus for All Seasons, the Badminton Sarcophagus, Metropolitan Museum of Art, photo by Barry Ferst

The Istanbul Archeological Museum epitomizes the meaning of baksheesh (bribe, tip). I had been at the Istanbul museum twice before, and the room that held a great catch of sarcophagi was closed, but on a third visit, a guard, sensing my frustration, says he can get me in for $10. After the deal was struck, to my amazement he begins ushering museum visitors out of the hall in which we are standing and when that was done, he opens the “forbidden” door to the sarcophagi. I have ten minutes and I shoot without focusing — oops.

At the Greek port city of Thessaloniki, a guard says “no”. I insist, so he takes me to a museum official. Up a back stairway we go, and in a distant corner office sits the museum’s chief curator. After a short but pleasant conversation which results in several “no’s”, I resort to pleading. “I’ve come all the way from America…just for this museum.” However, it took, “My grandmother was forced from Smyrna by the Turks” to accomplish the task at hand.

On one trip, I follow a path through Turkey that begins at Greece’s Kipi Border Crossing Point, swings south through Aphrodisias, then along the Mediterranean coast through Antakya to Antioch.

I taxi into Syria across the Turkish border, then rent 1968 Volkswagen that I keep alive with a vise-grips pliers securing a loose carburetor screw, and drive out to Palmyra. On the roadway, small clusters of soldiers are signaling with their machine guns that I ought to give them a few dinar, providing me with enough sense of great adventure to fill my travel days forever.

Farfa Abbey just east of Rome is said to have a sarcophagus. So, at 1:10 PM on July 3, 2015, I walk into the Abbey church looking for the sarcophagus. There I am informed that I can come back at 4:00 to photograph because afternoon prayers have begun. But coming back at 4:00 means losing three hours. I need to say something, so I explain that I have to photograph now because Pope John Paul II has asked me to meet with him at 2:00. Yes, that’s a dangerous lot of chutzpah, but I get my picture.

How about this for directions for finding a sarcophagus: “South of Mirande, isolated in a field between Berdoues and Belloc, is the tiny rustic chapel of St. Clemens—the key is kept at the farmhouse opposite.”

Upon locating this field with its padlocked chapel, I start searching for the right farmhouse (which is not exactly opposite), and after thirty minutes find a tea-stained octogenarian who has the key “if only I can remember where I put it.”

At France’s Narbonne Archaeological Museum, “no photos” is so strictly enforced that not only did each room have its guard, but visitors are followed by doddering oldsters who scold if you tried to go back to a previous room. This was the only one-way museum I have ever visited. Ciceronian reasoning could convince no one to allow photographs.

In the French city of Agen, the cathedral chapter house supposedly has a paleo-Christian sarcophagus. When I get there not only are the doors locked, but the locks look like they had not been opened since the Cathars were burned at the stake. I plead, but with a shrug of his shoulders the cathedral priest could just as well be saying, “Professor, I don’t think the locks has been opened since we burned the Cathars at the stake.”

One last remark. As I worked, I began feeling as though I were re-animating the Roman dead. Okay, this is eerie, but as I read Frontius’ epitaph on a coffin lid, it was as if Frontius were speaking to me.

In another sarcophagus were the bones of a little girl, dead at twelve, innocent and lovely, and so dear to her parents. As they came alive again, alive to a perfect stranger, they gained in some small measure the immortality they had so desired.