In a our world where are mainstream sporting heroes are millionaires, prima donnas, sex-offenders, and drug-cheats, the Olympics, can provide countries the world over with real sporting icons, icons worthy of that over- and misused term ‘role-model’.
However, the glory that our gold-medallists enjoy nowadays pales into insignificance when compared to that of the ancient winners. 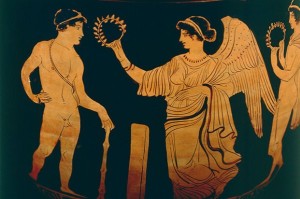 This was because the games were only open to those from the Greek-speaking world. Moreover, there were merely a handful, rather than hundreds, of events, and it would have been quite likely that the victors would have returned to their pre-fame lives after the games – there were no sponsorship deals on offer then!
That’s not to say the winners of the Ancient Olympics didn’t enjoy their fair share of recompense. While they were rarely entitled to anything by law, the proud polis would often honor their returning hero with money, food and other such perks.
So, who were these noble competitors who fought to be the greatest physical specimens of The Greatest Civilization? Let’s have a look at some of them, shall we?

1. Coroebus of Elis – the first

A humble cook who grew up near the sanctuary of Olympia, Coroebus was the first man whom we can definitely say was an ‘Olympic champion’. He won the only event at the very first recorded Games in 776 BC – the stadion (which was an approximately 200 meters run).

2. Leonidas of Rhodes – the most prolific

Leonidas was the most successful Olympian ever.
Ever! And I’m including the modern Olympics in that.
Leonidas won the stadion, diaulos (circa.400 meters) and the hoplitodromos (a diaulos carrying 59lbs of armour) at each of the 164 BC, 160 BC, 156 BC and 152 BC games.
These twelve individual first-place finishes (the last of which he achieved at age 36) narrowly surpasses the 11 golds of Michael Phelps. It should be noted that while Phelps did technically win more golds overall, some of those were in relays… and none while wearing battle armour.

3. Diagoras of Rhodes – the happiest 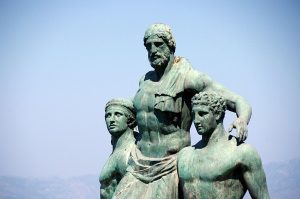 Rhodes’ second favourite son, Diagoras, was considered not only the happiest Olympian, but the happiest man in the world!
Descended from heroic royalty, Diagoras won the Olympic boxing crown twice. As if this weren’t enough to raise a smile, his eldest son twice triumphed in the brutal pankration. On the second occasion, in 448 BC, Diagoras’ second son simultaneously triumphed in the boxing.
Hoist aloft on the shoulders of his progeny, a wag in the crowd called out “Die, Diagoras; you will not also ascend to Olympus”. The humour of which was probably only appreciated later, as Diagoras promptly dropped dead on the spot.

4. Astylos of Croton – the saddest

A runner of great renown, Astylos was a highly controversial figure.
The reason being that, after bringing honour to Croton in the games of 488 BC, he turned-coat and, in 484 BC and 480 BC, decided to run for the rival Sicilian city of Syracuse.
His statue in Croton was destroyed, his disgraced family disowned him and his former lodgings were thought unworthy of a free man and were transformed into a prison.
The greatest sprinter of the 480s died a lonely exile, far from his family and friends.

5. Milo of Croton – the most impressive

Unlike Astylos, Milo was someone of whom Croton could really be proud. 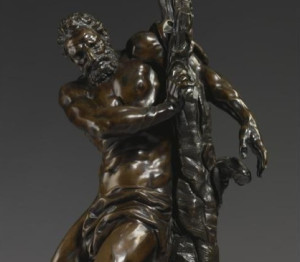 Milo won five Olympic wrestling crowns consecutively between 536 – 520 BC.
Amazingly, these gongs may not represent the greatest achievements of Milo’s life.
He was said to have led a successful military assault against Sybaris in 510 BC and to have saved the life of Pythagoras (yes, THAT Pythagoras) by holding up the roof of a collapsing building. Consequently, he was given the mathematician’s daughter’s hand in marriage.
Less important, but no less impressive, are his alleged feats of strength and appetite.
He was said to have carried a bull on his shoulders before killing, cooking and eating the entire beast. Though this was perhaps excessive, his normal daily diet was 20 lbs of meat and 20 lbs of bread all washed down with 12 bottles of wine.
And completely uselessly, though again impressively, he was able to burst a headband simply by swelling the veins on his temple. 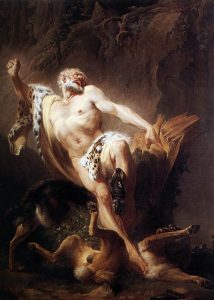 As so often happens with a unbelievable life, Milo suffered a unbelievable death, he was eaten alive by wolves because his hands were stuck in a tree trunk.
There is something deeply impressive and stirring about the achievements of all these citizens. They pushed their bodies to the extremes for the guarantee of no more corporeal gain than a crown of olive leaves.
However, like gallant generals, evocative poets and quixotic politicians, what they were truly yearning for was neither gold or even praise, but immortality. And although such a thing cannot realistically be attained by any man in any field, the fact that their names ring clear and true 2800 years after the event means their ‘athl’, their labours and suffering, cannot be said to have been in vain.
Facebook