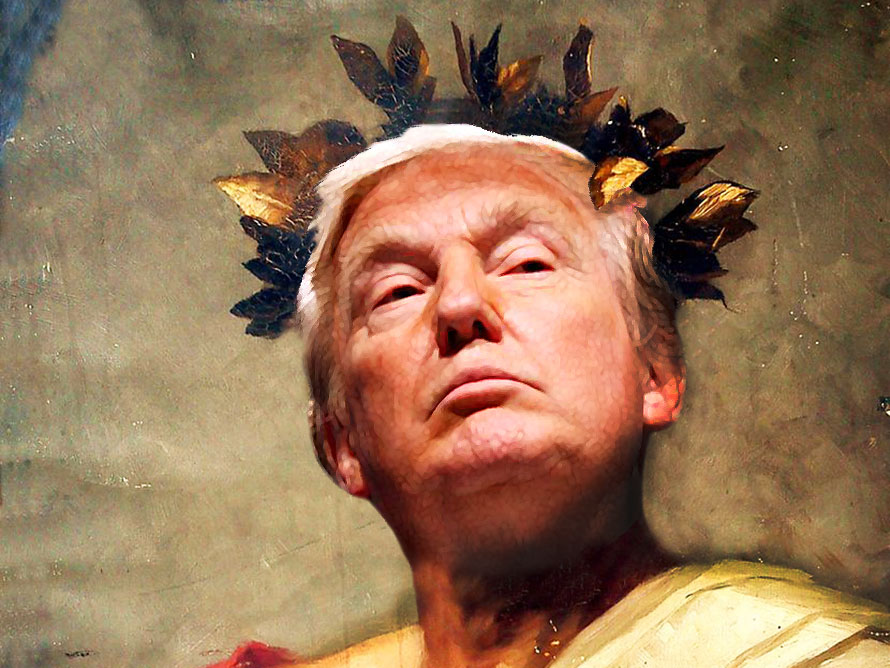 The Tragedy of Trump

Today, we come to bury Caesar, not to praise him…

We have witnessed the final act of a tragedy that would be the envy of Sophocles, Aeschylus, or Euripides.

As with any good tragedy, it begins with a man of middling character. A man who crossed the Potomac to do war upon his enemy.

Likening himself after Achilles, our Caesar is overcome with pride, his hamartia.

He is tortured by his enemies… by The New York Times… by the gods.

Exhibiting a level of hubris that would make Ajax blush, Caesar rails against his fate. At his zenith, he experiences a dramatic reversal of fortune.

And now, the chorus has reappeared to sing its exode…

You will recall our mandate. We believe classical wisdom can ring true for modern minds.

And my word… if ever there was a need for a classical perspective, it’s now.

“We’re living through unprecedented times,” squawk the well-dressed media personalities. Our response, as the kids would say, is: LOL!

Never before have so many people believed so many impossible things.

As we’re fond of saying, there has never been a disaster so disastrous, no calamity so calamitous, and no idea so idiotic that it didn’t happen at least once over the millennia.

Much has been made of the fall of Caesar Trump. “[H]is ever-lasting shame,” says Chuck Schumer. “Unstable,” cries Nancy Pelosi.

The internet overflows with strongly-worded opinion pieces after the barbarians stormed the gates and laid waste to the Curia Julia.

And if you are looking for such a piece, dear reader, then you will surely be disappointed.

All the same, let’s take up the topic… and examine the tragedy of Trump.

A History of Tragedy

Like philosophy or democracy, theatrical tragedy is a tradition passed on to us from the Classical Greeks.

The zenith of Greek tragedy came during the fifth century, when men like Sophocles, Aeschylus, and Euripides put quill to parchment and gave the world tragedies like Oedipus Rex, The Oresteia, and Medea.

A full examination of the Greek tragic corpus is beyond the scope of this letter. But for interested readers, Classical Wisdom has spilled mountains of ink on these playwrights and their works.

Suffice to say, the Greek tragic tradition remains one of the most enduring legacies of the Classical age. You can still find these performances in well-funded theaters, in shabby off-Broadway productions, and in any bookstore worth its salt.

The definition of a tragedy was given by our good friend Aristotle, when he writes in Poetics:

A tragedy is the imitation of an action that is serious and also, as having magnitude, complete in itself; in appropriate and pleasurable language;… in a dramatic rather than narrative form; with incidents arousing pity and fear, wherewith to accomplish a catharsis of these emotions

Broadly speaking, a tragic character has the following characteristics:

It is worth noting that these characteristics were not unique to the classical canon. Oedipus is a tragic figure. So is Antigone. But so is Jay Gatsby… and Darth Vader.

And so is Donald Trump…

The Tragedy of Trump

We pause only briefly to acknowledge that we are not the first to make this observation.

It was perhaps best argued by professor emeritus and Senior Fellow at Stanford University’s Hoover Institution, Victor Davis Hanson. Readers are encouraged to catch up on the conversation here.

But let’s continue the thread…

Donald Trump is not a paragon of virtue, clearly. But neither were the tragic Greeks.

The rage of Achilles is a recurring theme in The Illiad. The opening lines of the epic even invoke the muses to sing of the wrath of Peleus’ son.

The hubris—excessive pride—of Ajax is well documented in Sophocles’ Ajax when the titular character believes he does not need the help of the gods to win the honor of Achilles’ armor.

The wrath of Trump is (or was) on full display by a casual perusal of the man’s Twitter feed. Like Achilles, he is not content to slay his enemies honorably. He feels compelled to drag their corpses around the walls of Troy.

You get the idea…

Like Ajax, our Caesar rails against the gods for the injustice done upon him (I won that armor by a landslide!).

And then comes the reversal of fortune…

The barbarians climb the walls and storm the halls of Congress. Our elected rascals were sore afraid. They lay the blame squarely at Caesar’s feet.

His allies abandon him.

“Count me out,” says Lindsey Graham.

“[A] man without a country,” chides Mattis.

The tech oligarchs ban him. The media oligarchs chastise him. The political oligarchs try to oust him (even though he’s already gone). The PGA Tour ditches his golf course!

The gods have so thoroughly humbled Caesar.

Like Orestes tormented by the furies, he seems destined to wander Palm Beach County alone… outcast… and tortured.

We can imagine even now the righteous indignation welling up inside our dear readers.

They are—perhaps even as we speak—summoning their outrage and preparing a strongly-worded letter to the editor (please address it to [email protected]!).

And at the risk of sparking more outrage, we make another observation…

A recurring characteristic of tragic characters is their recognition of some ignoble wrong. The tragic man (or woman!) then tries to rectify this injustice, which is followed by personally disastrous—and predictable—consequences.

Antigone—from Sophocles’ play of the same name—recognized the injustice of denying her brother Polynices’ funeral rites after he is killed in the Theban civil war.

In defiance of Creon, she buries her brother. The woman is sentenced to death before she ultimately takes her own life.

Euripides’ Orestes recognized the injustice of his father’s murder at the hands of his mother, Clytemnestra. He kills her, and is pursued by the furies as punishment.

Why is it that half of the population cannot afford an unexpected $500 expense without going into debt?

Why is it that opioid addiction, depression, and “deaths of despair” have been rising since the 1990s?

What might be the consequences of the countless manufacturing jobs that were shipped overseas and never came back?

And why is it that villages up and down the Acela corridor… in the hills of Appalachia… and in the nooks and crannies of Middle America are now hollowed-out ghost towns?

Oh, dear reader. These are dark and troubling questions. A more philosophically-minded group of statesmen might have thought soberly about such things.

But the oligarchs (political, media, or otherwise) seemed uninterested. After all, there were advertisements to be aired. Horses to be traded. Lobbyist donations to be accepted.

And lo, it was in such squalor that the little people turned to their Big Man, their Achilles, their Ajax.

He promised—in rough and reckless ways—to bury Polynices, to avenge Agamemnon, to make the forgotten men and women of a lost America seen again.

And now, in the final act, fate has done its gruesome work on him.

The goal of tragedy—in the words of Aristotle—is to evoke a “catharsis,” a cleansing of the soul through a purgation of fear or pity. Tragedy forces a mirror to our soul and screams: look!

Or—in the words of professor Simon Critchley—“Tragedy provokes what snags in our being, the snares and booby traps of the past that we blindly trip over in our relentless, stumbling forward movement.”

And as the curtain closes on the greatest performance of modern politics, we can’t help but wonder if ever there was a story that was more pitiable…