By Ben Potter
Right… how to put this delicately? Well, if you’ve experienced any recent anger thinking about a certain Supreme Court ruling on civil liberties, or about Facebook’s colourful profile filters, or about J. K. Rowling’s revelation about Dumbledore, or by… listening to Elton John, then this may not be the article for you.
Equally, if you’re fine with all of the abovementioned things, but just don’t like reading about sex, then you too should perhaps sit this one out.
All cleared up? Do we still have one or two readers left? Good… on with the show!
Discussing homosexuality in the ancient world is a slightly trickier topic than it may at first seem for the very simple reason that it didn’t really exist! That’s not to say same sex relations didn’t occur, they did, constantly and copiously.
The point is that ‘homosexuality’ and, by its very acknowledgement, ‘heterosexuality’ are peculiarly modern phenomena that do not translate to the ancient world.
(N.B. ‘Homosexuality’ would not have translated to the greater part of the modern world; the term was only coined in 1869.)
If one wished to apply modern terminology to the ancients then one could say that most, if not all, men were some form of ‘bisexual’ (or at least imminently capable of bisexual acts), though as this implies sexual desire for both men and women, it too is misleading. Despite the ubiquity of such sex, there could be an immense amount of shame and humiliation involved in partaking of certain homosexual acts.
Confused? Well done if not! But bear with me for a moment and perhaps the waters will look a little less murky.
The key point about same-sex relations in the ancient world was not one of gender, but of social status and bodily violation (i.e. being penetrated).

The sexual pursuit of young beautiful boys was considered common practice for Athenian men.
Athens was, as far as we know, the place where homosexual acts were most tolerated, where it was expected that adult, male citizens pursue beautiful, adolescent boys with the aim of being sexually gratified by them.
Even though a boy could be courted from the start of puberty, the age at which downy fluff first appeared on the cheeks was the most desirable – when a boy could develop a full beard or had hair on his buttocks was the point at which he lost his allure and began to enter the realm of men.
To pursue a social inferior, i.e. an adolescent, was perfectly acceptable, though a wooing process was necessary to win the favour of free citizen boys. That such boys were free to accept or reject such advances meant that the relationships they entered were probably a good deal more consensual than those of their sisters who could have been married off at the whim of their fathers.
For a man to have sex with male slaves or prostitutes was barely considered to be worth mentioning in terms of its effect on a man’s social status unless… and here is the crux of the matter… he himself was penetrated.
Being orally or anally penetrated was a source of great shame which could have serious social consequences for a young man. With this restriction in place, the accepted etiquette for bringing a more senior partner to climax could be through masturbation or, more commonly, through intercrural sex i.e. thrusting the penis between the thighs.
It’s difficult for us to comprehend that there was absolutely nothing wrong with a 15 year old boy having a close friendship with a 40 year old man and regularly gratifying him sexually. Even stranger is the idea that, should such a relationship even once boil over into oral or anal sex, then it could bring everlasting shame on the boy and damage his reputation, future career and marriage prospects – though would bring no shame whatsoever upon the penetrator.
A commonly-cited fallacy is that such relationships were not merely sexual, but of a higher order and that the elder man acted as mentor to the younger, improving his education and even, ironically, his morality. Even without examples of purely sexual relationships, and indeed of purely educational relationships without a sexual element, this argument has more than a whiff of ‘I buy Playboy for the articles’ about it. 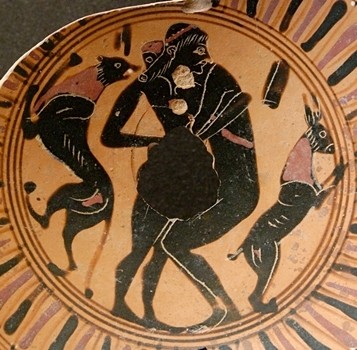 It might be considered naïve to think that intimate (and, presumably in some cases, loving) sexual relationships could strictly adhere to the ‘no penetration’ rule, and indeed this is almost certainly the case. However, the key point was not what actually went on in the bedroom (it was widely assumed that sodomy would have been part of the bill of fare), but what was publically spoken about.
This importance of this early foray into “don’t ask don’t tell” is highlighted by the story of Periander, the tyrant of Ambracia who publically chided a male lover by asking him if he was pregnant yet. The boy, who had presumably been willingly sodomised on a regular basis prior to this, responded by promptly murdering his lover and ruler; the only course available to restore his masculinity.
As seen from the example above, Athens was by no stretch an abnormality in its approach; similar behaviour occurred in most of the rest of Greece, parts of the Near East and certainly in Rome. The key difference for the Romans was that it was thought very bad form to sexually pursue a free-citizen (of either gender). This prohibition could, ironically, have actually increased the amount of sodomy going on, as there would be no qualms about having anal sex with male prostitutes or slaves (indeed, slaves were often purchased solely for this specific purpose).
One aspect of the shame of penetration actually goes with the pleasure of it. It was assumed that women enjoyed being penetrated and were ignoble for this very reason (or possibly vice versa). Thus, any man who derived pleasure in such a manner was a kinaidos, a pathetic feminine creature – there is no English word which transmits the same level of rancid shame.
And thus we come to the kinds of loves and of lovers. Of lovers there were two clear types: the older erastes (lover, pursuer, penetrator) and the younger eromenos (beloved, pursued, penetrated). The ‘love’ the erastes felt for the eromenos was eros (sexual desire), whilst the love of the eromenos for the erastes was philia (non-sexual love) or entirely absent. For an eromenos to feel eros for his erastes would have been wholly inappropriate and abnormal. Indeed, the reason pederastic relationships were not encouraged to continue into adult life was because an adult was driven by eros, therefore one member of an adult male/male relationship must be a kinaidos.
The older erastes would pursue the younger eromenos. That’s not to say such relationships didn’t exist, but would probably have been subject to public ridicule or, much more probably, conducted in a ‘discreet’ manner. Remember, the key point was what your lover said, not what they did. It seems that familiar preface to many homophobic sentences ‘I don’t mind what people get up to behind closed doors…’ was actually true in antiquity – possibly because you were doing exactly the same thing yourself!
As men dominated the public, political and literary arenas, obviously we have much more evidence for male/male sexual activity, but ‘lesbianism’, or more specifically, lesbian acts, are documented.
Plato and Ovid both matter-of-factly talk about women being sexually attracted to one another, while the Spartan poet, Alcman writes of women appreciating one another’s desirability. 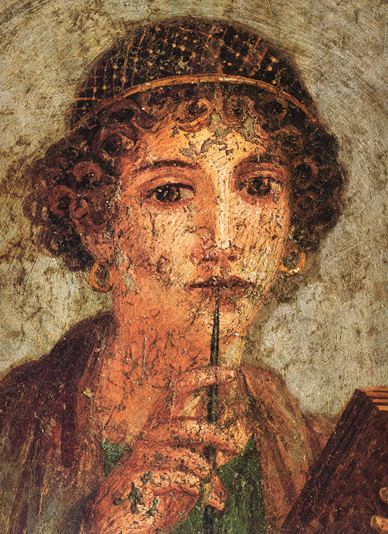 Sappho, depicted in a fresco painting in Pompeii
The geographically-eponymous Lesbian was, of course, Sappho, the 7/6th century BC poet from the island of Lesbos. Like with her male counterparts the only modern term appropriate for Sappho is ‘bisexual’, as she was not only married, but wrote passionate love poetry about both sexes.
It would be easy to assume, though impossible to confirm, that Sappho’s sexuality was nothing out of the ordinary as, despite her fame, nobody raised an eyebrow of objection about her writing until the ultra-conservative Augustan writers of the first century AD. That said, women who actually preferred women, rather than made love to them out of curiosity or necessity, were treated with suspicion.
(N.B. A delicious irony is that in antiquity ‘lesbian sex’ was actually slang for fellatio – a filthy and demeaning act.)
Cunnilingus as a sexual act was relatively benign or even irrelevant as, without penetration or the possibility of penetration, the struggle for sexual power lost its significance. However, tribads, women who penetrated other women (or even men) with a dildo or distended clitoris were grotesquely unnatural – it is conceivable that the toxic term kinaidos would be insufficient for a man who partook in such a reversal of natural, penetrative dominance.
It would be inaccurate to say that men and women in the ancient world were either gay, straight, bisexual or homophobic – none of the terms adequately reflect the sexual machinations of the time. Whether pederasty was a hangover from an ancient initiation rite, grew from a desire to make love to somebody educated (educational circumstances meant that most women would have been unable to make intellectual lovers), or was simply a matter of taste we cannot know.
What we are more sure of is that ‘homosexuality’ in the ancient world retained its character from the time of the Minoans (27th century BC) right up until the fall of the Western Roman Empire (5th century AD). So, although it would be very difficult to defend many aspects of homosexual (or indeed heterosexual) conduct in the ancient world, the fact that such behaviour has over 3000 years of tradition and longevity on its side might mean that, perhaps, it’s worth thinking twice before defending something purely because it can be said to represent ‘traditional values’.