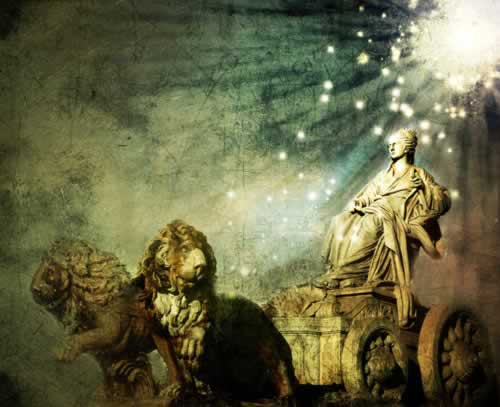 Written by Ed Whalen, Contributing Writer, Classical Wisdom
Religious festivals played a very important role in Rome and one of the most remarkable was the Megalesia, which was celebrated in the Republican and Imperial era. Dedicated to a goddess known as Magna Mater (Latin, literally ‘great mother’), the event was to many a shocking affair because of its eunuch priests and strange ceremonies. The festival honored the goddess but also served several other important functions.
Who Was the Magna Mater?
The Magna Mater was an ancient Anatolian goddess believed to have originated in prehistoric fertility cults and her worship may date back to the Neolithic period. In Phrygia (modern-day western Turkey) and elsewhere she was known as Cybele, but in Rome, she became known as the Great Mother.
She can be understood to be an Earth Goddess, and her cult had the aspects of a Mystery Religion. Devotees were initiated into her mysteries and granted secret knowledge. The mother goddess was often depicted as traveling in a lion-drawn chariot. She was served by a eunuch priests and her worship was often controversial because of the wild behavior of her followers. Self-castration was often practiced by her male followers.
The Origin of the Megalesia
During the Second Punic War (218 to 201 BC), Hannibal ravaged Italy. In 205 BC, the Romans were terrified by portents indicating imminent defeat and famine. In desperation, they consulted the Sibylline Books, a set of oracular writings. The religious advisors interpreted the books as stating that Rome must worship the Cybele. Diplomatic negotiations began to bring the goddess from Phrygia to Rome. She arrived in the city in the form of the a black meteoric stone from the ancient city of Pessinos.
Roman worship of the Magna Mater was controversial. The majority of the population eventually embraced the cult in part because, once Cybele was brought to Rome, the tide of the war against Hannibal did indeed turn. The mother goddess cult soon became a state religion and the religious authorities in Rome decided to hold a festival in her honor. Her worship eventually spread throughout much of the empire.
The Megalesia Festival
The Romans initiated an annual celebration of the mother goddess in 191/192 BC which commenced after the construction of a temple in her honor by Marcus Junius Brutus. The festival, which was funded by the state, began on April 4th and lasted several days. The event included sacred plays and other entertainment likely staged in the Great Mother’s Temple. These sacred dramas were based on the story of Cybele and her eunuch consort Attis.
During the Megalesia, the cult image of the Magna Mater was carried in a public procession. This process was decidedly unlike anything else in Roman religion, whose rituals were often austere and restrained. The procession was accompanied by eunuch priests and dancers often dressed as warriors. A crowned image of the goddess was drawn in a replica of her lion-chariot. On April 10, a cult image of the mother goddess was taken to the racetrack and chariot races were staged in her honor. Many sacrifices were made to the Magna Mater.
During the festival, Roman nobles would spend lavishly on entertainment and banquets. The festival became infamous for riotous and outrageous behavior. In 106 BC, the Senate limited spending on entertainment during the festival. From an early date, Roman citizens could not participate in the procession as it was deemed unseemly. Slaves were excluded from even attending the festival.
The religious procession and the celebrations of the eunuch priests were never fully accepted by members of the Roman elite, particularly the conservatives. It was seen by many as primarily a festival of the plebians, or common people.
The popularity of this festival and the worship of the Magna Mater is evident in the establishment of a ‘Holy Week’ of sacrifices and celebrations in March in  honor of the goddess. This is often regarded as an extension of the Megalesia festival.
The Holy Week festival was based on the myths of the Magna Mater and her consort and involved ritual castration and whipping on the so-called ‘Day of Blood’.  It is possible that versions of the Megalesia was also celebrated in the provinces of the Roman Empire.
The Function Of the Festival
The festival was primarily a religious event. Many ancient commentators saw the festival as honoring the Sibylline Oracles. The Oracles were seen as correct to recommend the adoption of the cult, as it helped Rome survive the crisis of the Second Punic War.
The festival also served other social functions. Many prominent Roman families claimed Trojan descent and because the goddess was associated with Phrygia—the homeland of the Trojans—they used the event to emphasize their claimed origins. In this way, they demonstrated their ancestry and social status, which in turn helped legitimize their rule.
For the lower classes, the festival served to affirm their collective identity. At one point, the populist leader Clodius tried to control of the festival in a challenge to patrician control of the city. Cicero later successfully prosecuted Clodius for sacrilege.
Conclusion
The Megalesia was a great religious festival in honor of a mother goddess whose origin is thought to be far more ancient than the Roman empire itself. The goddess’ arrival in Rome and subsequent worship there was thought to have saved the empire at a time of crisis. The festival was popular among both the plebians and the patricians but viewed with suspicion by the conservatives. The festival not only served an important religious role in Roman life but also played an important political and social role throughout the empire.
References:
Beard, Mary, North, John and Price, Simon (1998). Religions of Rome. Cambridge: Cambridge University Press.
Facebook