Suicide: A Hero’s way out?

The debt we owe to the Ancients is almost impossible to measure. They gave the western world maths, theatre, wine, democracy, the Olympics, history, wine, libraries, roads, wine, philosophy, sanitation, universities, pizza and even wine (for a more comprehensive list see Monty Python’s Life of Brian).
We have much to thank our forebears for and a whole lifetime would not be long enough to fully comprehend the bounty they have bestowed upon us.
However, one area in which the teaching of antiquity is best left to the theoretical is the ultimate pro-life/pro-choice one… suicide.
The taking of one’s own life was not exclusively the refuge of the hopeless, the weak or the mentally unstable. Indeed, mors voluntaria (voluntary death) was not automatically laden with any negative connotation in the same way suicidium later came to be. 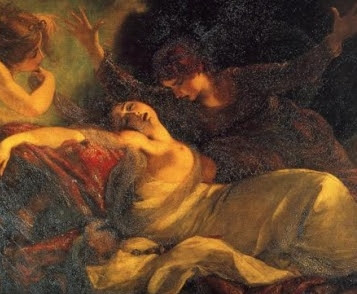 The Death of Dido, Joshua Reynolds, 1781

In fact, the latter term was not in general use until the 12th century AD, by which time its meaning had become bastardized. So much so, that if you mentioned suicidium to a Roman c.50 AD he would have presumed you were talking about killing pigs!
Etymology aside, the methods, malice or merits of suicide were still quite tricky concepts to clearly understand.
Defeat in battle, loss of (female) chastity, sickness, old-age and selflessness are documented reasons for ancients wishing to take the final, irreversible step.
“When arising from shame and dishonor, suicide was regarded as appropriate; self-sacrifice was admired; impulsive suicide was less esteemed than a calculated, rational act” (Miriam T. Griffin). 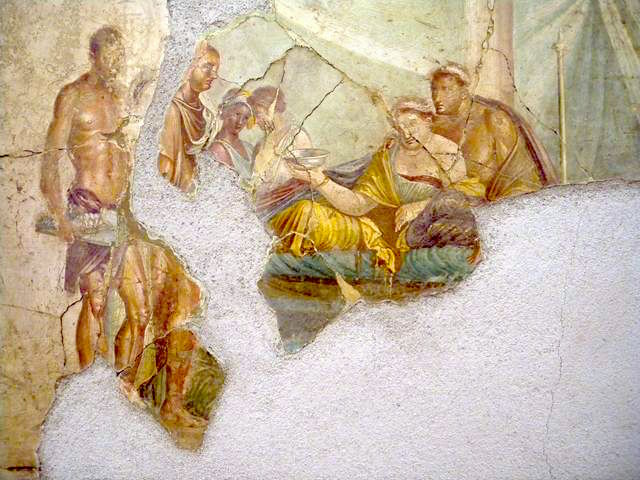 Roman painting from the House of Giuseppe II, Pompeii, early 1st century AD, most likely depicting Cleopatra VII, wearing her royal diadem, consuming poison in an act of suicide, while her son Caesarion, also wearing a royal diadem, stands behind her.

Slavish, plebeian or feminine ways of checking out, like jumping from a height, drowning or hanging, were totally reviled. If one wished to end it all in an heroic, manly fashion then the only way to do it was by using a weapon.
Therefore, the classic image of a disgraced or defeated Roman opening his veins in a hot bath (referenced in Godfather II) was not merely dramatic license on the part of Hollywood.
One downside of suicide (besides the obvious) in most modern, monotheistic societies was seemingly not relevant for the ancients, i.e. prohibited entry into the afterlife.
In Homer’s Odyssey we see the great Achilles standing shoulder to shoulder with Ajax – the wretched King of Salamis who took his own life at Troy. 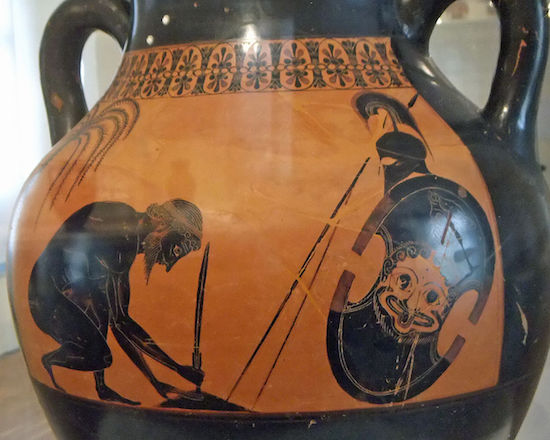 However, his wretchedness was not simply ascribed to his suicide, but the unheroic causes of it. Ajax killed himself in a fit of pique – he didn’t seem to give a second thought to the fact that he was the Greek’s greatest living warrior and his selfish action could have lost them the Trojan War.
Conversely, Leonidas’ kamikaze mission in delaying the Persian army’s advance with only ‘300’ soldiers was seen as a noble and worthy act – a feat truly worth giving one’s life for.
Having said that, in general, the Greeks were not very pro-choice.
Aristotle, who considered the act a social injustice, stated that “taking one’s own life to avoid poverty or desire or pain is unmanly… or rather cowardly”.
Plato was slightly more ambiguous when he said that “what ought a man to suffer if he kills that which is most truly his own… if he takes his own life”? Going on to explain that “crimes against the state are crimes against the gods, and vice versa. When a man kills himself without good reason… he is committing a crime.” Though he does concede “intolerable shame” can justify the act. 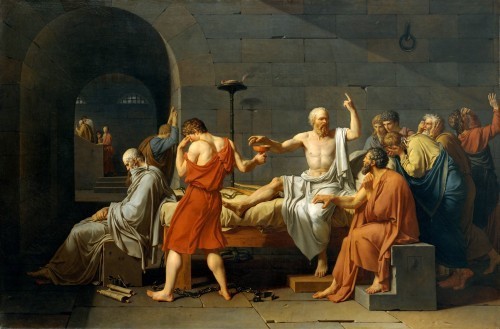 Was Socrates’ death suicide?
The Death of Socrates, by Jacques-Louis David, 1787

A similar caveat is begrudgingly part of Epicurean doctrine – though in their instance, the case for life can be decided using a simple pleasure versus pain equation.
Socrates also had something to say on the topic… as one might expect from a man forced to commit suicide by a jury of his peers. He believed a man should not take his own life “until the god sends some compulsion upon him”.
Therefore, while we can see Leonidas as more of a martyr than a suicide victim, it’s safe to make the generalization that the Greeks distrusted, disliked or disapproved of suicide.
And so it was up to the Romans to give mors voluntaria a whiff of romanticism.
Indeed the mentality of Ajax, a mighty soldier shamed by the actions of inferior warriors, would have been much better understood by the proud and passionate Latins.
The civil war (that of Julius Caesar, Pompey, Brutus, Octavian/Augustus, Mark Antony and Cleopatra i.e. the setting for HBO’s Rome) produced no end of dramatic and heroic suicides.
Brutus killed himself after his eventual defeat to Octavian at Philippi, Cato refused to acknowledge that Caesar had the authority to pardon him and instead opted to disembowel himself, and Antony and Cleopatra famously fell to sword and asp respectively. 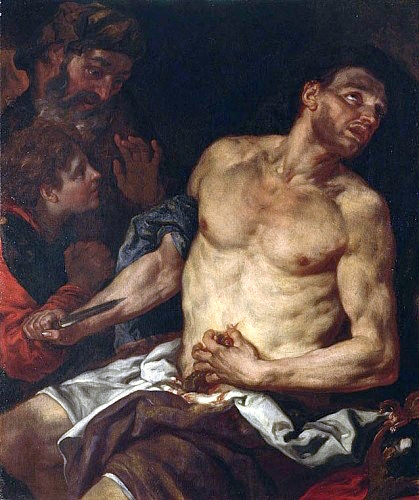 Each of these ends exuded an aura of honorable defiance or heroism. This reflection was accentuated by Nero’s pitiful ‘suicide’ in 68 AD.
Trapped in a villa four miles outside Rome, realizing his end was nigh, the disgraced emperor headed for the most dignified exit left open to him. However, such was his poltroonery that he couldn’t go through with it himself, instead he ordered his secretary to perform the gruesome deed.
As a feeble cop-out, all we can really say is that ancient attitudes towards suicide were ambiguous. In one breath it could be venerated and in the next compared to murder.

Death of Nero, By Smirnov V.S.

It took Constantine’s conversion to Christianity in the early 4th century AD for the ancient world to be euthanized of its uncertainty.
Soon it would become clear that the decision to end life was no longer in the hands of man, nor of the gods, but of God.
So, if you wanted to kill yourself in antiquity, it was much better to do it in pagan Rome than in Greece, as the former was more likely to bring you a reputation for valor. However, any type of mors voluntaria in Christian Rome was likely to cause many more problems than it solved.
Perhaps it’s worth bearing in mind the words (rather than the deeds) of the Roman philosopher, Seneca: “Sometimes even to live is an act of courage”.
In short… don’t kill yourself. And if you do, please don’t cite this article in your suicide note.
Facebook