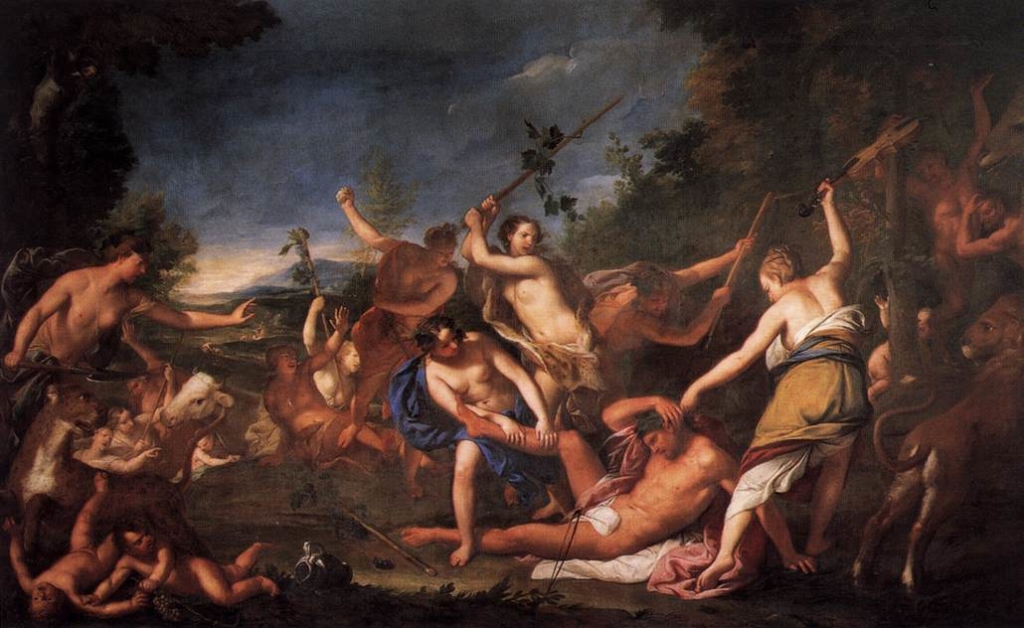 By Ben Potter
If I invited you to a bacchanalia what would you expect? Wine? Dancing? Sex? Of course you would. How about harmonizing with nature? Mass hallucination? Violence? Carpaccio? You’re beginning to think you should call and cancel, aren’t you?
Well don’t worry, it might not be as wild as you think. Then again, it might be much worse. The ancient Athenians, like you and I, did not seem to have a crystal clear idea of what constituted a bacchanalia.
This reason for this is simple – it was a secret. Well, a mystery to be precise.
The shroud of secrecy that hung over these proceedings is appropriately reflected in Euripides’ The Bacchae. Appropriate because, despite a straightforward plot, The Bacchae is probably the least easy of Euripides‘ extant plays to analyse. Written in Macedon and performed posthumously in Athens, the story is simple: 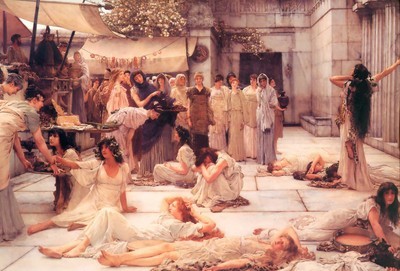 Pentheus, the king of Thebes, had banned all worship of his cousin Dionysus. Dionysus decided to wreak revenge. He sent the women of the city mad with devotion and forced them out into the glens of Mount Cithaeron. These women were his ‘Bacchae’. Pentheus wanted to arrest all the Bacchae and execute the ‘effeminate foreigner’ (Dionysus in disguise) who was exciting them. Dionysus was arrested, he escaped, and then escorted a brainwashed (and transvestitized) Pentheus into the countryside to watch the sexual exploits of the Bacchae.
Far from getting his free peep show, Pentheus was torn limb from limb by the revellers led by his crazed mother, Agave. Agave brought the head of Pentheus back to the city and everyone agreed that it had been a mistake to disrespect Dionysus.
So where lies the problem? Well, it lies in the message. Quite simply, there isn’t a great deal of consensus as to what it was.
A lot has been made of the conspicuous absence of sex in the behavior and dialogue of Dionysus. It is Pentheus who seems obsessed with this element of the dionysiac experience. And indeed, it is this obsession that leads to his death. Before the opportunity to spy on the worshippers arises, Pentheus, though in the wrong, is strong and steadfast in his opposition to Dionysus. 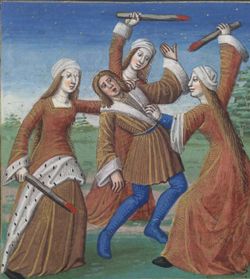 However, Pentheus is actually dionysiac by nature – as, of course, his blood would dictate. Failure to repress, or fully submit to this leads first to the loss of his authority and, ultimately, to the loss of his life.
What this treatment of the sexual element means is unclear. Was Euripides trying to convey that the worship of Dionysus was more than merely about sex? Was he pointing out that the reputation of the mystery cult in Macedon was different to that in Athens?
Another theory is that the play is a deathbed repentance of a man recanting all his years of blasphemy.
However, this is hard to believe as Dionysus is portrayed as a creature of horror, violence and cruelty. Not content with justice, but desirous to carry out torture and humiliation. 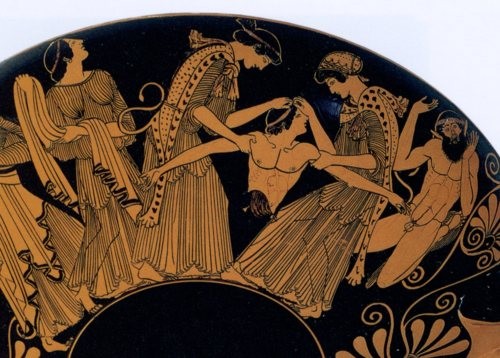 We witness this when the citizens of Thebes see their addled king being marched through the streets, emasculated in women’s garb. On his return both the clothes, and the body they covered, have gone. All that is left is a severed head clutched in the hands of his frenzied mother.
Whilst there is a call for piety, it feels more borne of pragmatism rather than of true belief. Cadmus, grandfather of Pentheus and Dionysus, states: “Mortals must not make light of gods – I would never do so”.
His words are given extra weight as he, along with Teiresias, are the only noble and wise characters in the play. He continues with a criticism: “Dionysus, god of joy, has been just, but too cruel”. Whilst the Chorus chime in with: “Cadmus I grieve for you. Your grandson suffered justly, but you most cruelly”.
The emphasis is not on hubris or blasphemy, but on the folly of upsetting a powerful enemy. This is tantamount to the willful abandonment of wisdom, something which many believed was at the root of key social and political problems in Athens. 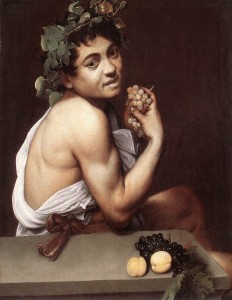 Dionysus himself explicitly states: “If you all had chosen wisdom, when you would not, you would have found the son of Zeus your friend”. This is perhaps the most convincing of the possible messages. Not least because it is consistent with the lifelong views of Euripides.
This play was written far away from the war-obsessed, bereaved, bankrupt and exhausted world of Athens, at a time when the Peloponnesian War was in the process of being lost.
Whether Euripides was a bitter exile or a content expatriate we cannot know, but his distance, together with his advanced age, may have given him greater urgency and freedom.
So, was the play a warning to the city?
A warning to be pious seems disingenuous, but perhaps that is what it was. Regardless of his religious beliefs, Euripides knew most Athenians exhibited signs of true belief. Is he, therefore, using religion to manipulate the believers? In doing so, trying to highlight the folly of war, trying to bring an end to the carnage? 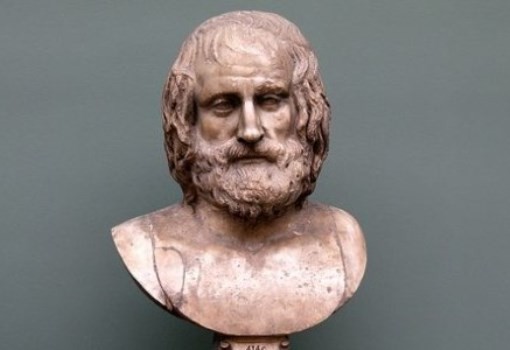 It is unusual to have a god, a true god – not a Heracles figure, dominate the action. Tragedy is filled with gods, but they are usually behind the scenes, pulling the strings, causing or resolving problems out of mortal control.
Religion and violence are clearly important aspects of The Bacchae. However, it is difficult to understand if the former is being used to explain, excuse, or warn against the latter. We certainly see extreme and brutal violence in Pentheus’ punishment. Also, he says he wants to ‘hunt’ the Maenads (the female followers of Dionysus) and has desires to execute the effeminate foreigner by stoning, hanging or beheading.
As Teiresias puts it: “Come Pentheus, listen to me. You rely on force; but it is not force that governs human affairs”.
Is Euripides emphasizing peace, piety or wisdom? Some traditional commentators consider the three interchangeable, each impossible to achieve without the others.
Something we must bear in mind is that Euripides knows he won’t be around much longer. He’ll no longer be there to tell people how to think, to point out the error of their ways. If he can persuade his estranged countrymen to think for themselves, to think logically, calmly and peacefully, then perhaps he can die with some hope for Athens.

More superficially, there is the idea that Euripides thinks Athenians are simply taking life too seriously. The fifth century is a time of serious thought, of democracy, logic, laws, expansion and building. Perhaps Euripides, reflecting from his position of remote tranquillity, thinks everyone should be a bit more dionysiac, should do what feels good.
We again turn to Teiresias for support: “Men have but to take their fill of wine and the sufferings of an unhappy race are banished…This is our only cure for the weariness of life”.
Or simply, sadly and quite subtly, the play might be an introspective look at the life of a lonely exile, a man who misses the acropolis and agora of Athens. Cadmus could easily have been our playwright in disguise: “What utter misery and horror has overtaken us all…in my old age I must leave my home and travel to strange lands”.
You may see this play as a belated adoption of religion, a drive for peace, the plea of an educated man desperate for his fellow citizens to think, the lament of a heartbroken exile who misses his homeland, or simply an encouragement for us too to dance, drink and be merry. Whichever way, hopefully the overriding conclusion drawn from The Bacchae is that this is a truly fascinating piece of theatre from the mind of an undeniably extraordinary individual.
Interested in reading the twisted tale of The Bacchae by Euripides? You can access it here for Free: https://classicalwisdom.com/greek_books/Bacchae/
“The Bacchae: the Morals of Murderous Women” was written by Ben Potter
Facebook