What is Evil? Why are we so interested in it? | Classical Wisdom Weekly 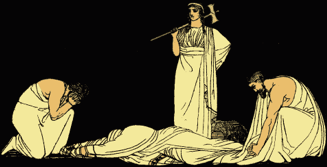 What is Evil? Why are we so interested in it?

It’s hard to anticipate, to accept. The idea that you could actually know someone evil.
That happens to other people, right?
But there I was, staring at the photo in the newspaper of my former classmate, clad in the orange prison jumpsuit in front of the judge.
The headline described the whole lurid affair:
Eighth grade teacher ‘caught in bed’ having sex with her student, 15
I was shocked, to say the least. We were in girls scouts together, for goodness sake! To think a grown woman would have an affair with a minor, a child! Surely, there isn’t much in the world that is more evil than that…. Surely, that should be obvious.

The most famous case: The recently departed Mary Kay Letourneau with her very young lover and student Vili Fualaau, from a photo taken with a self timer. After serving 7 years in Prison Mary Kay married Vili and they had two children.

Unfortunately, it’s not.
The problem arises when we try to really define evil. Our natural assumption is that evil, like the monsters in Greek mythology, will be conspicuous, a glaring abnormality that no one can ignore.
But ‘evil’ is a little more subtle than that… a little more subject to time and place.
My former childhood playmate’s actions, for instance, were much more legal if the couple were in Germany, France, Sweden, Japan, South Korea or Brazil…
But many everyday occurrences, such as sex before marriage, eating meat or being a banker, don’t appear abhorrent to most cultures nowadays. And yet, not that long ago such actions could have resulted in exile from the community – a lifetime of being shunned.
It’s a tricky notion when studying the ancient world as well. Actions that were approved upon by their contemporaries (at least most of the time) can be horrifying to modern readers.
One only has to think of Achilles mutilating and dragging the body of his worthy rival, Hector, in the Iliad. Or Achilles refusing to participate in battle because his slave girl has been taken away. Or Achilles leaving a river of blood in his vengeful rage.
Really, just about anything Achilles does.

Achilles with Hector’s body “Triumph of Achilles” in Corfu

Odysseus, likewise, doesn’t always come up so good with regards to our current sensibilities…
There are larger general historical examples as well. Slavery, the treatment of women or the poor, mass orgies, ritual sacrifice… to name a few.
Oh, and there’s that whole sex with young boys thing… (again).
Moreover, in ancient Greece’s ‘shame’ culture, something is really only bad if it is seen by others.
This just has to make you wonder about the very nature of evil, both for the individual and society… which brings us to our Monday mailbag question:
What is Evil? Why are we so interested in it? Is “Evil” relative in the first place? And if evil is only in the eye of the beholder, can it be said to exist at all?
As always, you can comment below or write me directly at [email protected].
Remember, we bring up reader responses in our Classical Wisdom Speaks Podcast. In fact, you can check out our most recent podcast, “What makes you YOU?”, available on all platforms, including Youtube.
Facebook