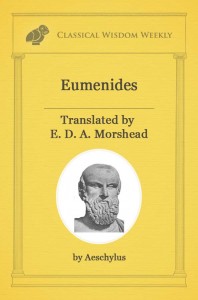 Written 458 B.C.E
Translated by E. D. A. Morshead
‘Eumenides’ is the finale in Aeschylus’ dark trilogy. Chased by the maddening furies, the mother killing Orestes pleads to the gods for resolution.

First, in this prayer, of all the gods I name  The prophet-mother Earth; and Themis next,  Second who sat-for so with truth is said-  On this her mother’s shrine oracular.  Then by her grace, who unconstrained allowed,  There sat thereon another child of Earth-  Titanian Phoebe. She, in after time,  Gave o’er the throne, as birthgift to a god,  Phoebus, who in his own bears Phoebe’s name.  He from the lake and ridge of Delos’ isle  Steered to the port of Pallas’ Attic shores,  The home of ships; and thence he passed and came  Unto this land and to Pamassus’ shrine.  And at his side, with awe revering him,  There went the children of Hephaestus’ seed,  The hewers of the sacred way, who tame  The stubborn tract that erst was wilderness.  And all this folk, and Delphos, chieftain-king  Of this their land, with honour gave him home;  And in his breast Zeus set a prophet’s soul,  And gave to him this throne, whereon he sits,  Fourth prophet of the shrine, and, Loxias hight,  Gives voice to that which Zeus his sire decrees.  Such gods I name in my preluding prayer,  And after them, I call with honour due  On Pallas, wardress of the fane, and Nymphs  Who dwell around the rock Corycian,  Where in the hollow cave, the wild birds’ haunt,  Wander the feet of lesser gods; and there,  Right well I know it, Bromian Bacchus dwells,  Since he in godship led his Maenad host,  Devising death for Pentheus, whom they rent  Piecemeal, as hare among the hounds. And last,  I call on Pleistus’ springs, Poseidon’s might,  And Zeus most high, the great Accomplisher.  Then as a seeress to the sacred chair  I pass and sit; and may the powers divine  Make this mine entrance fruitful in response  Beyond each former advent, triply blest.  And if there stand without, from Hellas bound,  Men seeking oracles, let each pass in  In order of the lot, as use allows;  For the god guides whate’er my tongue proclaims.

She goes into the interior of the temple; after a short interval, she returns in great fear.

Things fell to speak of, fell for eyes to see,  Have sped me forth again from Loxias’ shrine,  With strength unstrung, moving erect no more,  But aiding with my hands my failing feet,  Unnerved by fear. A beldame’s force is naught-  Is as a child’s, when age and fear combine.  For as I pace towards the inmost fane  Bay-filleted by many a suppliant’s hand,  Lo, at the central altar I descry  One crouching as for refuge-yea, a man  Abhorred of heaven; and from his hands, wherein  A sword new-drawn he holds, blood reeked and fell:  A wand he bears, the olive’s topmost bough,  Twined as of purpose with a deep close tuft  Of whitest wool. This, that I plainly saw,  Plainly I tell. But lo, in front of him,  Crouched on the altar-steps, a grisly band  Of women slumbers-not like women they,  But Gorgons rather; nay, that word is weak,  Nor may I match the Gorgons’ shape with theirs!  Such have I seen in painted semblance erst-  Winged Harpies, snatching food from Phineus’ board,-  But these are wingless, black, and all their shape  The eye’s abomination to behold.  Fell is the breath-let none draw nigh to it-  Exude the damned drops of poisonous ire:  And such their garb as none should dare to bring  To statues of the gods or homes of men.  I wot not of the tribe wherefrom can come  So fell a legion, nor in what land Earth  Could rear, unharmed, such creatures, nor avow  That she had travailed and had brought forth death.  But, for the rest, be all these things a carp  Unto the mighty Loxias, the lord  Of this our shrine: healer and prophet he,  Discerner he of portents, and the cleanser  Of other homes-behold, his own to cleanse!

She goes out. The central doors open, disclosing the interior of the temple. ORESTES clings to the central altar; the FURIES lie slumbering at a little distance; APOLLO and HERMES appear from the innermost shrine.
APOLLO to ORESTES

Lo, I desert thee never: to the end,  Hard at thy side as now, or sundered far,  I am thy guard, and to thine enemies  Implacably oppose me: look on them,  These greedy fiends, beneath my craft subdued I  See, they are fallen on sleep, these beldames old,  Unto whose grim and wizened maidenhood  Nor god nor man nor beast can e’er draw near.  Yea, evil were they born, for evil’s doom,  Evil the dark abyss of Tartarus  Wherein they dwell, and they themselves the hate  Of men on earth, and of Olympian gods.  But thou, flee far and with unfaltering speed;  For they shall hunt thee through the mainland wide  Where’er throughout the tract of travelled earth  Thy foot may roam, and o’er and o’er the seas  And island homes of men. Faint not nor fail,  Too soon and timidly within thy breast  Shepherding thoughts forlorn of this thy toil;  But unto Pallas’ city go, and there  Crouch at her shrine, and in thine arms enfold  Her ancient image: there we well shall find  Meet judges for this cause and suasive pleas,  Skilled to contrive for thee deliverance  For by my hest thou didst thy mother slay.

O king Apollo, since right well thou know’st  What justice bids, have heed, fulfil the same,-  Thy strength is all-sufficient to achieve.

Have thou too heed, nor let thy fear prevail  Above thy will. And do thou guard him, Hermes,  Whose blood is brother unto mine, whose sire  The same high God. Men call thee guide and guard,  Guide therefore thou and guard my suppliant;  For Zeus himself reveres the outlaw’s right,  Boon of fair escort, upon man conferred.

Sleep on! awake! what skills your sleep to me-  Me, among all the dead by you dishonoured-  Me from whom never, in the world of death,  Dieth this course, ‘Tis she who smote and slew,  And shamed and scorned I roam? Awake, and hear  My plaint of dead men’s hate intolerable.  Me, sternly slain by them that should have loved,  Me doth no god arouse him to avenge,  Hewn down in blood by matricidal hands.  Mark ye these wounds from which the heart’s blood ran,  And by whose hand, bethink ye! for the sense  When shut in sleep hath then the spirit-sight,  But in the day the inward eye is blind.  List, ye who drank so oft with lapping tongue  The wineless draught by me outpoured to soothe  Your vengeful ire! how oft on kindled shrine  I laid the feast of darkness, at the hour  Abhorred of every god but you alone!  Lo, all my service trampled down and scorned!  And he bath baulked your chase, as stag the hounds;  Yea, lightly bounding from the circling toils,  Hath wried his face in scorn, and flieth far.  Awake and hear-for mine own soul I cry-  Awake, ye powers of hell! the wandering ghost  That once was Clytemnestra calls-Arise!

The FURIES mutter grimly, as in a dream.

Mutter and murmur! He hath flown afar-  My kin have gods to guard them, I have none!

The FURIES mutter as before.

O drowsed in sleep too deep to heed my pain!  Orestes flies, who me, his mother, slew.

The FURIES give a confused cry.

Yelping, and drowsed again? Up and be doing  That which alone is yours, the deed of hell!

The FURIES give another cry.

Lo, sleep and toil, the sworn confederates,  Have quelled your dragon-anger, once so fell!

In dreams ye chase a prey, and like some hound,  That even in sleep doth ply woodland toil,  Ye bell and bay. What do ye, sleeping here?  Be not o’ercome with toil, nor, sleep-subdued,  Be heedless of my wrong. Up! thrill your heart  With the just chidings of my tongue,-Such words  Are as a spur to purpose firmly held.  Blow forth on him the breath of wrath and blood,  Scorch him with reek of fire that burns in you,  Waste him with new pursuit-swift, hound him down!

Up! rouse another as I rouse thee; up!  Sleep’st thou? Rise up, and spurning sleep away,  See we if false to us this prelude rang.

strophe 1
Alack, alack, O sisters, we have toiled,  O much and vainly have we toiled and borne!  Vainly! and all we wrought the gods have foiled,  And turned us to scorn!  He hath slipped from the net, whom we chased: he hath ‘scaped us who should be our prey-  O’ermastered by slumber we sank, and our quarry hath stolen away!
antistrophe 1
Thou, child of the high God Zeus, Apollo, hast robbed us and wronged;  Thou, a youth, hast down-trodden the right that to godship more ancient belonged;  Thou hast cherished thy suppliant man; the slayer, the God- forsaken,  The bane of a parent, by craft from out of our grasp thou hast taken;  A god, thou hast stolen from us the avengers a matricide son-  And who shall consider thy deed and say, It is rightfully done?
strophe 2

The sound of chiding scorn  Came from the land of dream;  Deep to mine inmost heart I felt it thrill and burn,  Thrust as a strong-grasped goad, to urge  Onward the chariot’s team.  Thrilled, chilled with bitter inward pain  I stand as one beneath the doomsman’s scourge.
Eumenides By Aeschylus