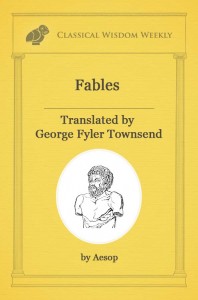 The Shepherd and the Wolf

A Fisherman, engaged in his calling, made a very successful cast and captured a great haul of fish. He managed by a skillful handling of his net to retain all the large fish and to draw them to the shore; but he could not prevent the smaller fish from falling back through the meshes of the net into the sea.
Aesops Fables