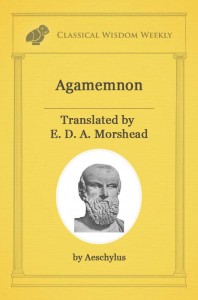 Agamemnon
By Aeschylus
Written 458 B.C.E
Translated by E. D. A. Morshead
Agamemnon, a returning hero from the Trojan war, is in for a surprise when he returns to his plotting wife.

Scene
Before the palace of AGAMEMNON in Argos. In front of the palace there are statues of the gods, and altars prepared for sacrifice. It is night. On the roof of the palace can be discerned a WATCHMAN.
WATCHMAN

I pray the gods to quit me of my toils,
To close the watch I keep, this livelong year;
For as a watch-dog lying, not at rest,
Propped on one arm, upon the palace-roof
Of Atreus’ race, too long, too well I know
The starry conclave of the midnight sky,
Too well, the splendours of the firmament,
The lords of light, whose kingly aspect shows-
What time they set or climb the sky in turn-
The year’s divisions, bringing frost or fire.

And now, as ever, am I set to mark
When shall stream up the glow of signal-flame,
The bale-fire bright, and tell its Trojan tale-
Troy town is ta’en: such issue holds in hope
She in whose woman’s breast beats heart of man.

Thus upon mine unrestful couch I lie,
Bathed with the dews of night, unvisited
By dreams-ah me!-for in the place of sleep
Stands Fear as my familiar, and repels
The soft repose that would mine eyelids seal.

And if at whiles, for the lost balm of sleep,
I medicine my soul with melody
Of trill or song-anon to tears I turn,
Wailing the woe that broods upon this home,
Not now by honour guided as of old-

But now at last fair fall the welcome hour
That sets me free, whene’er the thick night glow
With beacon-fire of hope deferred no more.
All hail!

A beacon-light is seen reddening the distant sky.

Fire of the night, that brings my spirit day,
Shedding on Argos light, and dance, and song,
Greetings to fortune, hail!

Let my loud summons ring within the ears
Of Agamemnon’s queen, that she anon
Start from her couch and with a shrill voice cry
A joyous welcome to the beacon-blaze,
For Ilion’s fall; such fiery message gleams
From yon high flame; and I, before the rest,
Will foot the lightsome measure of our joy;
For I can say, My master’s dice fell fair-
Behold! the triple sice, the lucky flame!
Now be my lot to clasp, in loyal love,
The hand of him restored, who rules our home:
Home-but I say no more: upon my tongue
Treads hard the ox o’ the adage.

Had it voice,
The home itself might soothliest tell its tale;
I, of set will, speak words the wise may learn,
To others, nought remember nor discern.

He withdraws. The CHORUS OF ARGIVE ELDERS enters, each leaning on a staff. During their song CLYTEMNESTRA appears in the background, kindling the altars.
CHORUS singing

Ten livelong years have rolled away,
Since the twin lords of sceptred sway,
By Zeus endowed with pride of place,
The doughty chiefs of Atreus’ race,
Went forth of yore,
To plead with Priam, face to face,
Before the judgment-seat of War!

A thousand ships from Argive land
Put forth to bear the martial band,
That with a spirit stern and strong
Went out to right the kingdom’s wrong-
Pealed, as they went, the battle-song,
Wild as the vultures’ cry;
When o’er the eyrie, soaring high,
In wild bereaved agony,
Around, around, in airy rings,
They wheel with oarage of their wings,
But not the eyas-brood behold,
That called them to the nest of old;
But let Apollo from the sky,
Or Pan, or Zeus, but hear the cry,
The exile cry, the wail forlorn,
Of birds from whom their home is torn-
On those who wrought the rapine fell,

Heaven sends the vengeful fiends of hell.
Even so doth Zeus, the jealous lord
And guardian of the hearth and board,
Speed Atreus’ sons, in vengeful ire,
‘Gainst Paris-sends them forth on fire,
Her to buy back, in war and blood,
Whom one did wed but many woo’d!
And many, many, by his will,
The last embrace of foes shall feel,
And many a knee in dust be bowed,
And splintered spears on shields ring loud,
Of Trojan and of Greek, before
That iron bridal-feast be o’er!
But as he willed ’tis ordered all,
And woes, by heaven ordained, must fall-
Unsoothed by tears or spilth of wine
Poured forth too late, the wrath divine
Glares vengeance on the flameless shrine.

And we in grey dishonoured eld,
Feeble of frame, unfit were held
To join the warrior array
That then went forth unto the fray:
And here at home we tarry, fain
Our feeble footsteps to sustain,
Each on his staff-so strength doth wane,
And turns to childishness again.
For while the sap of youth is green,
And, yet unripened, leaps within,
The young are weakly as the old,
And each alike unmeet to hold
The vantage post of war!
And ah! when flower and fruit are o’er,
And on life’s tree the leaves are sere,
Age wendeth propped its journey drear,
As forceless as a child, as light
And fleeting as a dream of night
Lost in the garish day!
But thou, O child of Tyndareus,
Queen Clytemnestra, speak! and say
What messenger of joy to-day
Hath won thine ear? what welcome news,
That thus in sacrificial wise
E’en to the city’s boundaries
Thou biddest altar-fires arise?
Each god who doth our city guard,
And keeps o’er Argos watch and ward
From heaven above, from earth below-
The mighty lords who rule the skies,
The market’s lesser deities,
To each and all the altars glow,
Piled for the sacrifice!
And here and there, anear, afar,
Streams skyward many a beacon-star,
Conjur’d and charm’d and kindled well
By pure oil’s soft and guileless spell,
Hid now no more
Within the palace’ secret store.

O queen, we pray thee, whatsoe’er,
Known unto thee, were well revealed,
That thou wilt trust it to our ear,
And bid our anxious heart be healed!
That waneth now unto despair-
Now, waxing to a presage fair,
Dawns, from the altar, to scare
From our rent hearts the vulture Care.

List! for the power is mine, to chant on high
The chiefs’ emprise, the strength that omens gave!
List! on my soul breathes yet a harmony,
From realms of ageless powers, and strong to save!

How brother kings, twin lords of one command,
Led forth the youth of Hellas in their flower,
Urged on their way, with vengeful spear and brand,
By warrior-birds, that watched the parting hour.

Go forth to Troy, the eagles seemed to cry-
And the sea-kings obeyed the sky-kings’ word,
When on the right they soared across the sky,
And one was black, one bore a white tail barred.

High o’er the palace were they seen to soar,
Then lit in sight of all, and rent and tare,
Far from the fields that she should range no more,
Big with her unborn brood, a mother-hare.

Ah woe and well-a-day! but be the issue fair!
Agamemnon by Aeschylus