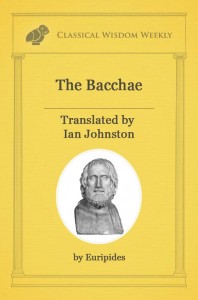 A twisted tale, where the God of wine, Dionysus, exacts revenge on behalf of his mother and to establish his God Status. Drives women mad and murderous.

DIONYSUS: divine son of Zeus and Semele, also called Bromius or Bacchus.
TIRESIAS: an old blind prophet
CADMUS: grandfather of both Dionysus and Pentheus, an old man
PENTHEUS: young king of Thebes, grandson of Cadmus, cousin of Dionysus
AGAVE: mother of Pentheus, daughter of Cadmus, sister of Semele
FIRST MESSENGER a cattle herder
SECOND MESSENGER: an attendant on Pentheus
CHORUS OF BACCHAE: worshippers of Dionysus who have followed him from Asia, also called Maenads or Bacchants.
SOLDIERS and ATTENDANTS around Pentheus

The following names are frequently mentioned but are not speaking characters in the play.

A thyrsus (pl. thyrsoi) is a hollow plant stalk, usually decorated with ivy, and carried as a symbol of Dionysus in the dancing celebrations (where it can acquire magical powers).
[Scene: The Greek city of Thebes, outside the royal palace.  Dionysus, appearing as young man, is alone, with the palace behind him, its main doors facing the audience.  He speaks directly to the audience]

DIONYSUS:  I’ve arrived here in the land of Thebes,
I, Dionysus, son of Zeus, born to him
from Semele, Cadmus’ daughter, delivered
by a fiery midwife—Zeus’ lightning flash.
Yes, I’ve changed my form from god to human,
appearing here at these streams of Dirce,
the waters of Ismarus. I see my mother’s tomb—
for she was wiped out by that lightning bolt.
It’s there, by the palace, with that rubble,
the remnants of her house, still smoldering
from Zeus’ living fire—Hera’s undying outrage
against my mother. But I praise Cadmus.
He’s made his daughter’s shrine a sacred place.
I have myself completely covered it
with leafy shoots of grape-bearing vines.
I’ve left the fabulously wealthy East,
lands of Lydians and Phrygians,
Persia’s sun-drenched plains, walled towns in Bactria.
I’ve moved across the bleak lands of the Medes,
through rich Arabia, all Asian lands,
along the salt-sea coast, through those towns
with their beautifully constructed towers,
full of barbarians and Greeks all intermingled.
Now I’ve come to Thebes, city of Greeks,
only after I’ve set those eastern lands
dancing in the mysteries I established,
making known to men my own divinity.
Thebes is the first city of the Greeks
where I’ve roused people to shout out my cries,
with this deerskin draped around my body,
this ivy spear, a thyrsus, in my hand.
For my mother’s sisters have acted badly,
something they, of all people, should avoid.
They boasted aloud that I, Dionysus,
was no child of Zeus, claiming Semele,
once she was pregnant by some mortal man,
attributed her bad luck in bed to Zeus,
a story made up (they said) to trick Cadmus.
Those sisters state that’s why Zeus killed her,
because she lied about the man she’d slept with.
So I’ve driven those women from their homes
in a frenzy—they now live in the mountains,
out of their minds.  I’ve made them put on costumes,
outfits appropriate for my mysteries.
All Theban offspring—or, at least, all women—
I’ve driven in a crazed fit from their homes.
Now they sit out there among the rocks,
underneath green pine trees, no roof overhead,
Cadmus’ daughters in their company as well.
For this city has to learn, though against its will,
that it has yet to be initiated
into my Dionysian rites. Here I plead
the cause of my own mother, Semele,
appearing as a god to mortal men,
the one she bore to Zeus.  Now Cadmus,
the old king, has just transferred his power,
his royal authority, to Pentheus,
his daughter’s son, who, in my case at least,
fights against the gods, prohibiting me
all sacrificial offerings.  When he prays,
he chooses to ignore me.  For this neglect
I’ll demonstrate to him, to all in Thebes,
that I was born a god.  Once these things here
have been made right, I’ll move on somewhere else,
to some other land, revealing who I am.
But if Thebans in this city, in their anger,
try to make those Bacchic women leave,
to drive them from the mountains forcibly,
then I, commander of these Maenads,
will fight them.  That’s why I’ve transformed myself,
assumed a mortal shape, altered my looks,
so I resemble any human being.

But you there, you women who’ve left Tmolus,
backbone of Lydia, my band of worshippers,
whom I’ve led here from barbarian lands,
my comrades on the road and when we rest,
take up your drums, those instruments of yours
from Phrygian cities, first invented
by mother Rhea and myself.  Move round here,
beat those drums by Pentheus’ palace,
let Cadmus’ city see you, while I go,
in person, to the clefts of Mount Cithaeron,
to my Bacchae, to join their dancing.

FIRST VOICE: From Asia, from sacred Tmolus
I’ve come to dance,
to move swiftly in my dance—
for Bromius—
sweet and easy task,
to cry out in celebration,
hailing great god Bacchus.

SECOND VOICE: Who’s in the street? Who’s there? Who?
Let him stay inside
out of our way.
Let every mouth be pure,
completely holy,
speak no profanities.
In my hymn I celebrate
our old eternal custom,
hailing Dionysus.

THIRD VOICE: O, blessed is the man,
the fortunate man who knows
the rituals of the gods,
who leads a pious life,
whose spirit merges
with these Bacchic celebrations,
frenzied dancing in the mountains,
our purifying rites—
one who reveres these mysteries
from Cybele, our great mother,
who, waving the thyrsus,
forehead crowned with ivy,
serves Dionysus.

FIFTH VOICE: His mother dropped him early,
as her womb, in forceful birth pangs,
was struck by Zeus’ flying lightning bolt,
a blast which took her life.
Then Zeus, son of Cronos,
at once hid him away
in a secret birthing chamber,
buried in his thigh,
shut in with golden clasps,
concealed from Hera.

SIXTH VOICE: Fates made him perfect.
Then Zeus gave birth to him,
the god with ox’s horns,
crowned with wreaths of snakes—
that’s why the Maenads
twist in their hair
wild snakes they capture.

SEVENTH VOICE: O Thebes, nursemaid of Semele,
put on your ivy crown,
flaunt your green yew,
flaunt its sweet fruit!
Consecrate yourselves to Bacchus,
with stems of oak or fir,
Dress yourselves in spotted fawn skins,
trimmed with white sheep’s wool.
As you wave your thyrsus,
revere the violence it contains.
All the earth will dance at once.
Whoever leads our dancing—
that one is Bromius!
To the mountain, to the mountain,
where the pack of women waits,
all stung to frenzied madness
to leave their weaving shuttles,
goaded on by Dionysus.

EIGHTH VOICE: O you dark chambers of the Curetes,
you sacred caves in Crete,
birthplace of Zeus,
where the Corybantes in their caves,
men with triple helmets, made for me
this circle of stretched hide.
In their wild ecstatic dancing,
they mixed this drum beat
with the sweet seductive tones
of flutes from Phrygia,
then gave it to mother Rhea
to beat time for the Bacchae,
when they sang in ecstasy.
Nearby, orgiastic satyrs,
in ritual worship of the mother goddess,
took that drum, then brought it
into their biennial dance,
bringing joy to Dionysus.

NINTH VOICE: He’s welcome in the mountains,
when he sinks down to the ground,
after the running dance,
wrapped in holy deerskin,
hunting the goat’s blood,
blood of the slain beast,
devouring its raw flesh with joy,
rushing off into the mountains,
in Phrygia, in Lydia,
leading the dance—
Bromius—Evoë!

ALL: The land flows with milk,
the land flows with wine,
the land flows with honey from the bees.
He holds the torch high,
our leader, the Bacchic One,
blazing flame of pine,
sweet smoke like Syrian incense,
trailing from his thyrsus.
As he dances, he runs,
here and there,
rousing the stragglers,
stirring them with his cries,
thick hair rippling in the breeze.
Among the Maenads’ shouts
his voice reverberates:
“On Bacchants, on!
With the glitter of Tmolus,
which flows with gold,
chant songs to Dionysus,
to the loud beat of our drums.
Celebrate the god of joy
with your own joy,
with Phrygian cries and shouts!
When sweet sacred pipes
play out their rhythmic holy song,
in time to the dancing wanderers,
then to the mountains,
on, on to the mountains.”
Then the bacchanalian woman
is filled with total joy—
like a foal in pasture
right beside her mother—
her swift feet skip in playful dance.

[Enter Tiresias, a very old blind man, dressed in clothing appropriate for the Dionysian ritual.  He goes up to the palace door and knocks very aggressively]

TIRESIAS: [shouting] Where’s the servant on the door?  You in there,
tell Cadmus to get himself out of the house,
Agenor’s lad, who came here from Sidon,
then put up the towers of this Theban town.
Go tell him Tiresias is waiting for him.
He knows well enough why I’ve come for him.
I’m an old man, and he’s even older,
but we’ve agreed make ourselves a thyrsus,
to put on fawn skins and crown our heads
with garlands of these ivy branches.

[Enter Cadmus from the palace, a very old man, also dressed in clothing appropriate for the Dionysian ritual]

CADMUS:                 My dearest friend,
I was inside the house.  I heard your voice.
I recognized it—the voice of a man truly wise.
So I’ve come equipped with all this god stuff.
We must sing his praise, as much as we can,
for this Dionysus, well, he’s my daughter’s child.
Now he’s revealed himself a god to men.
Where must I go and dance? Where do I get
to move my feet and shake my old gray head?
You must guide me, Tiresias, one old man
leading another, for you’re the expert here.
Oh, I’ll never tire of waving this thyrsus,
day and night, striking the ground.  What rapture!
Now we can forget that we’re old men.
The Bacchae