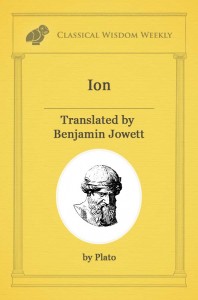 In ‘Ion by Plato’, Socrates discusses art with Ion. He asserts that the poetic art is not an art at all but a divine gift. Poets are possessed by the gods.

Persons of the Dialogue : SOCRATES ; ION

Socrates. Welcome, Ion. Are you from your native city of Ephesus ?
Ion. No, Socrates ; but from Epidaurus, where I attended the festival of Asclepius.
Soc. And do the Epidaurians have contests of rhapsodes at the festival ?
Ion. O yes ; and of all sorts of musical performers.
Soc. And were you one of the competitors — and did you succeed ?
Ion. I obtained the first prize of all, Socrates.
Soc. Well done ; and I hope that you will do the same for us at the Panathenaea.
Ion. And I will, please heaven.
Soc. I often envy the profession of a rhapsode, Ion ; for you have always to wear fine clothes, and to look as beautiful as you can is a part of your art. Then, again, you are obliged to be continually in the company of many good poets ; and especially of Homer, who is the best and most divine of them ; and to understand him, and not merely learn his words by rote, is a thing greatly to be envied. And no man can be a rhapsode who does not understand the meaning of the poet. For the rhapsode ought to interpret the mind of the poet to his hearers, but how can he interpret him well unless he knows what he means ? All this is greatly to be envied.
Ion. Very true, Socrates ; interpretation has certainly been the most laborious part of my art ; and I believe myself able to speak about Homer better than any man ; and that neither Metrodorus of Lampsacus, nor Stesimbrotus of Thasos, nor Glaucon, nor any one else who ever was, had as good ideas about Homer as I have, or as many.
Soc. I am glad to hear you say so, Ion ; I see that you will not refuse to acquaint me with them.
Ion. Certainly, Socrates ; and you really ought to hear how exquisitely I render Homer. I think that the Homeridae should give me a golden crown.
Soc. I shall take an opportunity of hearing your embellishments of him at some other time. But just now I should like to ask you a question : Does your art extend to Hesiod and Archilochus, or to Homer only ?
Ion. To Homer only ; he is in himself quite enough.
Soc. Are there any things about which Homer and Hesiod agree ?
Ion. Yes ; in my opinion there are a good many.
Soc. And can you interpret better what Homer says, or what Hesiod says, about these matters in which they agree ?
Ion. I can interpret them equally well, Socrates, where they agree.
Soc. But what about matters in which they do not agree ? — for example, about divination, of which both Homer and Hesiod have something to say —
Ion. Very true !
Soc. Would you or a good prophet be a better interpreter of what these two poets say about divination, not only when they agree, but when they disagree ?
Ion. A prophet.
Soc. And if you were a prophet, would you be able to interpret them when they disagree as well as when they agree ?
Ion. Clearly.
Soc. But how did you come to have this skill about Homer only, and not about Hesiod or the other poets ? Does not Homer speak of the same themes which all other poets handle ? Is not war his great argument ? and does he not speak of human society and of intercourse of men, good and bad, skilled and unskilled, and of the gods conversing with one another and with mankind, and about what happens in heaven and in the world below, and the generations of gods and heroes ? Are not these the themes of which Homer sings ?
Ion. Very true, Socrates.
Soc. And do not the other poets sing of the same ?
Ion. Yes, Socrates ; but not in the same way as Homer.
Soc. What, in a worse way ?
Ion. Yes, in a far worse.
Soc. And Homer in a better way ?
Ion. He is incomparably better.
Soc. And yet surely, my dear friend Ion, in a discussion about arithmetic, where many people are speaking, and one speaks better than the rest, there is somebody who can judge which of them is the good speaker ?
Ion by Plato
Facebook