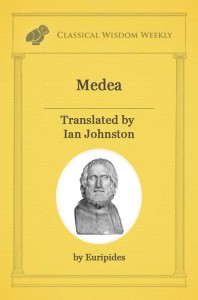 Hell hath no fury like a woman scorned. Follow magical Medea as she enacts her revenge on her husband who has left her for another woman.

[Outside the home of Jason and Medea in Corinth. The Nurse, a slave who serves Medea, is standing by herself]

NURSE
Oh how I wish that ship the Argo
had never sailed off to the land of Colchis,
past the Symplegades, those dark dancing rocks
which smash boats sailing through the Hellespont.
I wish they’d never chopped the pine trees down
in those mountain forests up on Pelion,
to make oars for the hands of those great men
who set off, on Pelias’ orders,
to fetch the golden fleece. Then my mistress,
Medea, never would’ve sailed away
to the towers in the land of Iolcus,
her heart passionately in love with Jason.
She’d never have convinced those women,
Pelias’ daughters, to kill their father.
She’d not have come to live in Corinth here,
with her husband and her children—well loved
in exile by those whose land she’d moved to.
She gave all sorts of help to Jason.
That’s when life is most secure and safe,
when woman and her husband stand as one.
But that marriage changed. Now they’re enemies.
Their fine love’s grown sick, diseased, for Jason,
leaving his own children and my mistress,
is lying on a royal wedding bed.
He’s married the daughter of king Creon,
who rules this country. As for Medea,
that poor lady, in her disgrace, cries out,
repeating his oaths, recalling the great trust
in that right hand with which he pledged his love.
She calls out to the gods to witness
how Jason is repaying her favours.
She just lies there. She won’t eat—her body
she surrenders to the pain, wasting away,
always in tears, ever since she found out
how her husband has dishonoured her.
She’s not lifted her eyes up from the ground,
or raised her head. She listens to advice,
even from friends, as if she were a stone,
or the ocean swell, except now and then
she twists that white neck of hers and weeps,
crying to herself for her dear father, her home,
her own land, all those things she left behind,
to come here with the man who now discards her.
Her suffering has taught her the advantages
of not being cut off from one’s own homeland.
Now she hates her children. When she sees them,
there is no joy in her. And I’m afraid
she may be up to some new mischief.
Her mind thinks in extremes. I know her well.
She’ll not put up with being treated badly.
I worry she may pick up a sharp sword
and stab her stomach, or else she’ll go
into the house, in silence, to that bed,
and kill the king and bridegroom Jason.
Then she’ll face an even worse disaster.
She’s a dangerous woman. It won’t be easy
for any man who picks a fight with her
to think she’s beaten and he’s triumphed.

[Enter Medea’s and Jason’s children with their Tutor]

Here come her children. They’ve finished playing.
They’ve no notion of their mother’s troubles.
Young minds don’t like to dwell on pain.

TUTOR
Old slave from my mistress’ household,
why are you here, standing by the gate,
all alone, complaining to yourself
about what’s wrong? How come Medea
is willing to stay inside without you?

NURSE
Old servant of Jason’s children,
when a master’s lot falls out badly,
that’s bad for faithful servants, too—
it touches their hearts also. My sorrow
was so great, I wanted to come here,
to speak to earth and heaven, to tell them
about the wrongs inflicted on my mistress.

TUTOR
Unhappy lady! Has she stopped weeping yet?

NURSE
Stopped crying? I envy your ignorance.
Her suffering has only just begun—
she’s not even half way through it.

TUTOR
Poor fool—
if I can speak that way about my masters—
she knows nothing of her latest troubles.

NURSE
What’s that, old man? Don’t spare me the news.

TUTOR
Nothing. I’m sorry I said anything.

NURSE
Come on, don’t hide it from a fellow slave.
I can keep quiet if I have to.

TUTOR
Well, I was passing by those benches
where the old men gamble by Peirene,
at the holy spring, and I heard someone say
(I was pretending I wasn’t listening)
that Creon, king of this country, intends
to ship the children away from Corinth,
with their mother, too. I’ve no idea
if the story’s true or not. I hope it’s not.

NURSE
But surely Jason wouldn’t let his children
go into exile, even if he’s squabbling
with their mother?

TUTOR
Old devotions fade,
pushed aside by new relationships.
Jason is no friend of people in this house.

NURSE
If we must add these brand-new troubles
to our old ones, before we’ve dealt with them,
then we’re finished.

TUTOR
But listen—the time’s not right
to let your mistress know about these things.
So keep quiet. Don’t mention anything.

NURSE
Children, do you hear what sort of man
your father is to you? My curse on him!
No. He is my master—but a bad man
to his own family. Of that he’s guilty.

TUTOR
What mortal man is not? Don’t you know yet
all men love themselves more than their neighbours.
And some are right to do that—while others
just want some benefit. But this father,
with his new wife, has no love for his children.

NURSE
Come on, children, get inside the house.
Things will be fine. [To the Tutor] You must keep them away—
as far as possible—and don’t bring them
near their mother when she’s in this state.
I’ve seen her look at them with savage eyes,
as if she means to injure them somehow.
I know this anger of hers will not end,
not before she turns it loose on someone.
I hope it falls on enemies, not on friends!

MEDEA [crying from inside the house]       I can’t stand this pain, this misery.
What do I do? I wish I could die!

NURSE
My dear children, you hear your mother’s cry.
Her heart’s upset. Her anger’s growing, too.
So quickly now, run off inside the house.
Stay out of sight. Don’t try to go and see her.
She’s fierce, headstrong by nature. Take care.
So go now—inside as quickly as you can.

[The Tutor and children enter the house]

It’s obvious the cloud of bitter grief
rising inside her is only just the start.
As her temper grows even more intense,
it will soon catch fire.  She’s a passionate soul,
hard to restrain. What will she do next,
now her heart’s been bitten by these injuries?

MEDEA [from inside the house]       The pain of this suffering—this intense pain.
Am I not right to weep? Oh my children,
cursed children of a hateful mother—
may you die with your father, all his house,
may it all perish, crash down in ruins.

NURSE
Oh the sorrow of it all. Poor woman!
Why link your children with the nasty things
their father’s done? Why do you hate them so?
I’m terrified the children will be hurt.
The pride of rulers is something to fear—
they often order men, but seldom listen.
And when their tempers change it’s hard to bear.
It’s better to get used to living life
as an equal common person. Anyway,
I don’t want a grand life for myself—
just to grow old with some security.
They say a moderate life’s the best of all,
a far better choice for mortal men.
Going for too much brings no benefits.
And when gods get angry with some home,
the more wealth it has, the more it is destroyed.

[Enter the Chorus of Corinthian women]

CHORUS LEADER
I heard her voice, I heard the cries
of that sad lady here from Colchis.
Has she not calmed down yet? Old nurse, tell me.
I heard from some household servant in there
that she’s been screaming. I find no pleasure
in this house’s suffering. We’ve been friends.

NURSE
This house is finished—already done for.
For Jason’s bound by his new marriage tie
to the king’s daughter. As for my mistress,
her tears are washing away her life in there,
inside the house. She finds no consolation
in the words of any of her friends.

MEDEA [still from inside the house]       Oh why can’t a bolt of lightning strike me?
What point is there in living any more?
I want death to come and sweep me off—
let me escape this life of suffering!

CHORUS
Oh Zeus and Earth and Sun—
do you hear how this young wife
sings out her misery?
Thoughtless lady,
why long for death’s marriage bed
which human beings all shun?
Death comes soon enough
and brings and end to everything.
You should not pray for it.
And if your husband
devotes himself to some new bed,
why get angry over that?
Zeus will plead for you in this.
Don’t waste your life away,
with too much wailing for your husband.

MEDEA [within]       O great Themis and noble Artemis,
do you see what I am having to endure,
when I’m the one who bound that cursed man,
my husband, with strong promises to me?
Oh, how I want to see him and his bride
beaten down, destroyed—their whole house as well—
for these wrongs they dare inflict on me,
when I’ve done nothing to provoke them!
O father and city, I left you behind
in my disgrace when I killed my brother.

NURSE
Do you hear what’s she’s saying, how she calls
to Themis, who hears our prayers, and Zeus,
who guards, they say, the promises men swear.
She’s bound to do something quite serious
before this rage of hers comes to an end.

CHORUS LEADER
I wish she’d let us see her face to face
and listen to what we have to tell her.
That might calm down her savage temper,
the fury in her heart. I’d like the chance
to show good will to a lady whom I like.
Go now—bring her here outside the house.
Tell her she’ll be among some friends of hers.
And hurry, before she harms someone in there—
that power in her grief will make her act.

NURSE
All right, though I’m afraid I won’t persuade
my mistress. Still, as a favour to you,
I’ll see what I can do. Right now she glares
at servants when they come close to her
to tell her something. She’s like a bull,
or lioness with cubs—that’s how she looks.
Those men from long ago—you’d not be wrong
to call them fools without much wisdom.
They thought up songs for celebrations,
feasts and banquets, bringing to human life
delightful music. But they found nothing
in music or the lyre’s many strings
to end the bitterness of human life,
the pain in living, sorrows bringing on
the deaths and horrifying disasters
which destroy whole families. What a blessing
it would be for human beings if music
could cure these sorrows. When people feast,
why should people sing? It’s a waste of time.
People who eat well are happy anyway—
they’ve enjoyed the pleasure of the meal.

[Nurse exits into the house]

CHORUS
I have heard Medea’s crying,
full of sorrow, full of tears,
her shrill accusations against Jason,
the husband who’s betrayed her.
Suffering such injustice, she cries out,
calling the gods—calling Themis,
Zeus’ daughter, goddess of those promises
which carried her across the ocean
to Hellas, through the black salt seas,
through the place which few men penetrate,
the strait which guards the Pontic Sea.
Medea by Euripides