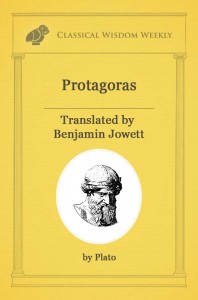 Socrates takes on Protagoras, the most famous sophist in Greece. Get into Pleasure, Evil, Knowledge and Virtue with this classic dialogue.

Persons of the Dialogue :
SOCRATES, who is the narrator of the Dialogue to his Companion ;
HIPPOCRATES ; ALCIBIADES ; CRITIAS ;
PROTAGORAS, HIPPIAS, PRODICUS, Sophists ;
CALLIAS, a wealthy Athenian.

Scene : The house of Callias

Companion. Where do you come from, Socrates ? And yet I need hardly ask the question, for I know that you have been in chase of the fair Alcibiades. I saw the day before yesterday ; and he had got a beard like a man — and he is a man, as I may tell you in your ear. But I thought that he was still very charming.