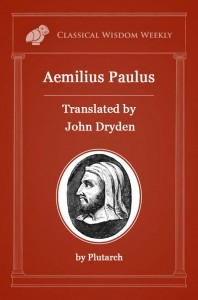 Aemilius, having thus put away Papiria, married a second wife, by whom he had two sons, whom he brought up in his own house, transferring the two former into the greatest and the most noble families of Rome. The elder was adopted into the house of Fabius Maximus, who was five times consul; the younger by the son of Scipio Africanus, his cousin-german, and was by him named Scipio.
Aemilius Paulus by Plutarch