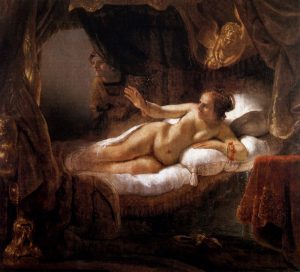 Destiny was unkind to poor Danae, or Danaê, depending on the spelling. She, like Oedipus and many other tragic Greek heros, never decided her destiny. The various gods in her life did it for her. What she wanted never came into play. Instead, the tides of fate tossed her and her son through a strange and spectacular tale.
It all started with her father, King Acrisius of Argos, who was disappointed with the lack of a male heir. He journeyed to the oracle to shed some light on the situation, but came away with a frightening prophecy. Apparently the son of his daughter will kill him.

Determined to not let this happen, he locked Danae away, either in a subterranean cave, if you consult one story, or a bronze tower, if you rely on another. Clearly, the king fancied himself smart enough to circumvent fate. Zeus, however, had other plans and certainly wasn’t going to let a thing like walls get in his way.
So the god of gods decided to visit poor Danae in her father’s prison in the form of a shower of gold. Silver just wouldn’t do. In this magical element he managed to impregnate the girl and she gave birth to a baby boy named Perseus.
Now Danae’s father was faced with a tricky situation. The prophesied patricidal child was apparently part Olympian and the royal grandfather-to-be definitely didn’t want to incur the wrath of an entity who is famous for throwing lightning bolts around. So king Acrisius concluded the best thing to do was to put mother and child into a wooden chest and throw said ‘vessel’ into the sea, leaving their life or death to fate. Not quite Grandad of the year, but at least their blood was not on his hands.
Once again the gods had Danae’s back. Poseidon was in cahoots with Zeus and calmed the seas for the pair. Eventually they found their way safely to the island of Seriphos, where they were taken in by the fisherman Dictys, the brother of King Polydectes. The surrogate father raised young Perseus to manhood but the island’s ruler clearly had a thing for his mother. The feelings were not returned, however, and Danae kept resisting his unrequited advances.
King Polydectes decided, however, that if he got rid of her overly protective son, he could have his way with Danae. Once the interfering bastard boy was old enough, the king sent him on a deadly mission. 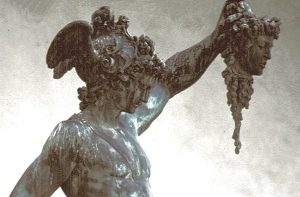 Perseus with the head of Medusa

So where did he send this inconveniently half divine youth? To the foreign land of the Grey Ladies, with orders to slay the hideous, snake-haired Gorgon Medusa.
Yet again, those divinities sitting on Olympus indulged in some human meddling. Athena lent him a shield that could repel the infamous stone changing gaze of Medusa. Perseus managed to use his gift so well that he not only survived, but killed the old hag and even rescued fair Andromeda (his future wife) on his way home.
The original father killing prophesy, however, somehow, still came true. After his success, Perseus participated in a sport competition in Larissa and accidentally killed his real grandpa with a flying javelin.
Too ashamed to return to Argos after stupidly murdering his predecessor and king of the country, Perseus, the rightful heir, gave the kingdom away and took over his kingdom of Tiryns, founding Mycenae and Midea there.
Now, let’s look to a more symmetrical, possible turn of events. In another version, Perseus sought revenge for sea chest dwelling days. He returned to his homeland glorious, carrying the head of medusa. Her powerful gaze, unaffected by decapitation is used on grandfather Acrisius to convert king, and court, to less than organic material.
In the end, Perseus takes his rightful place in the kingdom, all while his mother is aside him. Only then Danae reigns as the queen she is meant to be, finally.
Facebook