The Myth Of Sisyphus And Lessons In Absurdity

By Van Bryan
The legend of Sisyphus begins with a man who, if we are to believe Homer, was one of the wisest and most prudent of mortals. Nonetheless he would fall out of favor with the gods of ancient Greece. He was taken to the kingdom of the underworld and was forced to endure one of the most pointless and excruciating punishments of ancient mythology. Everyday he would carry a massive boulder up a mountain, straining and sweating all the while. When Sisyphus reached the top of the mountain, the boulder would immediately roll back down the hill in a matter of moments. Sisyphus would then make his tired march down the hill where he would start this task over again. It is said that Sisyphus would be forced to endure this for all of time, performing a pointless, tired task until the end of existence. 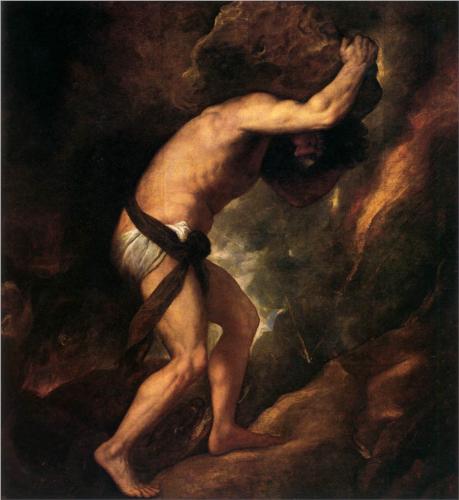 What did Sisyphus do to anger the gods? There are several different accounts. The one that Albert Camus seems to favor in his essay The Myth of Sisyphus, involves Sisyphus testing his wife’s devotion and love as he nears death. According to the story, Sisyphus asks his wife that, upon his death, she cast his unburied body into the town square. When Sisyphus dies he wakes up in the underworld only to find that his wife has indeed fulfilled his request. Sisyphus is angered that his wife would choose strict obedience to his word, rather than devoted love to his memory and dignity. Sisyphus is deeply troubled and (for reasons I don’t understand personally) asks Hades to return him to the world of the living so that he might scold his wife.
It would seem that Sisyphus’ wife is truly the tragic hero in this story, having followed her husbands request she is promptly confronted with a newly resurrected Sisyphus who scolds her for only doing as he asked. It doesn’t make sense, I know, but stick with me on this one. After Sisyphus returns to the mortal world he quickly decides that he does not wish to return to the underworld. He learns to love the trees, the cool oceans, and the feel of warm stone under his feet. He wishes to stay and so betrays Hades by refusing to return. It is only after Hermes swiftly captures the newly freed man, does Sisyphus return to the land of the dead. And there his boulder is waiting for him.
…
Albert Camus was born in Algeria in 1913. Only one year later, his father would be killed in World War I. Camus was raised by his mother in extreme poverty. At the age of 25, Camus traveled to France where he would develop into a highly successful author and existential philosopher. His book, The Plague, written in 1947, is particularly relevant today. He was involved with the French resistance during the Occupation of Paris during World War II. Editing and writing many underground newspapers during this time, Camus would attempt to undermine the Nazi control of Paris. He was awarded the Nobel Prize for literature in 1957, only to die tragically in a car crash three years later. 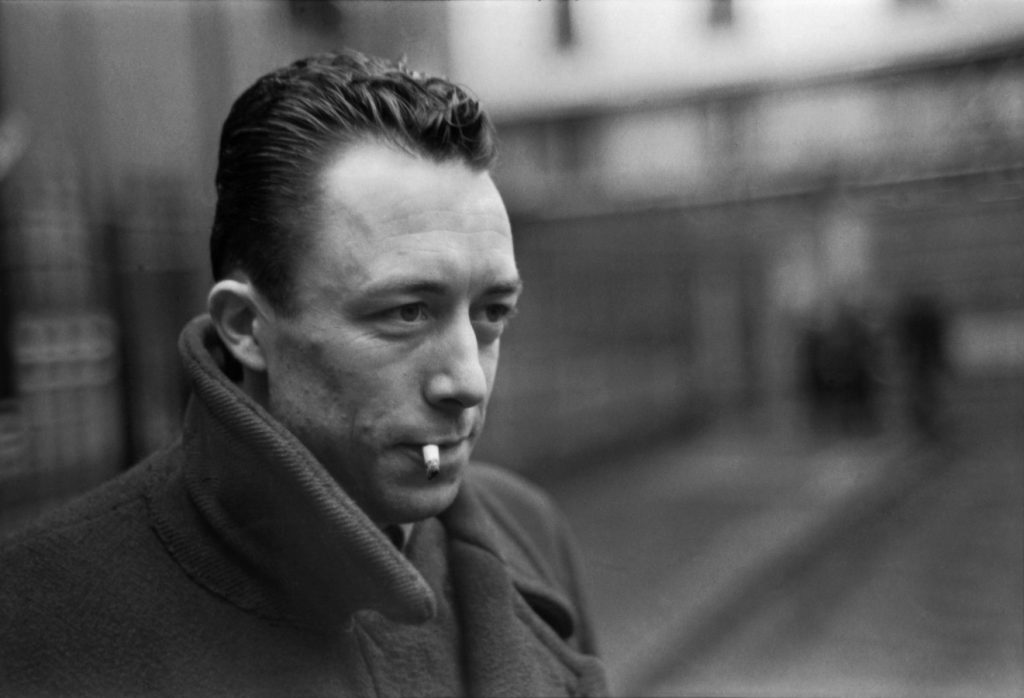 In The Myth Of Sisyphus, his first essay published in 1942, Camus uses the myth of Sisyphus as a corner stone on which to build his unique school of existential thought. Following some of the teachings of the Danish philosopher Soren Kierkegaard, Camus’ philosophy would later become known as Absurdism. Absurdism teaches that human beings struggle with an internal, never ending quest for purpose and fulfillment in life. This search for purpose is in direct conflict with the apparent purposelessness of the universe. Struggling to find meaning in a universe devoid of any is at the heart of the human condition, a condition that tortures us the more we fight against it.
“The Absurd” is the feeling that Camus describes when we are forced to confront the apparent meaninglessness of our existence. It is the uneasy realization that all purpose we may believe we have does not exist out there in the universe, but only in our own hearts and minds. And so life is an endless struggle to perform tasks that are essentially meaningless; we are born into this world, we fight vainly for understanding, and we are eventually sealed away by death.
It is not hard to see how Camus would find inspiration for this thinking from the myth of Sisyphus. The unfortunate mortal is unduly bound to his boulder. He will suffer for all eternity, straining all the while to perform a task that serves no purpose and inevitably must be repeated. It is this realization that would prompt a human being to tackle what Albert Camus considers the most important philosophical question. He poses this fundamental problem, rather bluntly, within the first few lines of his essay…

“There is but one truly philosophical problem, and that is suicide. Judging whether life is or is not worth living amounts to answering the fundamental question of philosophy.” -Albert Camus (The Myth Of Sisyphus) 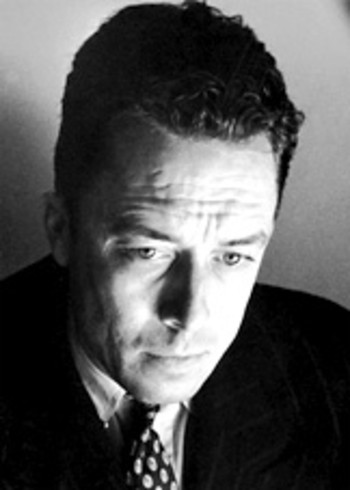 It is important to remember that Camus is not necessarily advocating suicide, but he does admit to consider it, at least partially, to be justified when faced with the absurdity of life. Camus writes that any healthy man is capable of considering the possibility of suicide, even if he never acts on it. And much like Hamlet when he muses “to be or not to be…”, Albert Camus makes an eloquent consideration for the prospects of taking ones own life. Camus writes that he is not so interested in the observation of the absurd, but rather the consequences of realizing it. He explains that we can either ignore the absurd, continue to search for meaning in vain, or reject the absurd and rebel against the purposelessness of the universe. In his own words…

“There is no fate that cannot be surmounted by scorn.” -Albert Camus (The Myth of Sisyphus)

Despite how it may appear, and this is the important part, The Myth of Sisyphus is not the musings of a mad man bent on self destruction. It is instead a manual for happiness. Camus tells us that as the boulder rolls back down the hill, Sisyphus must slowly descend to retrieve the rock to repeat his punishment. It is at this moment that he reflects on his punishment, much like the human being must become conscious of the absurd predicament of life. And yet it is in this moment of self reflection that we are happiest. By accepting the absurd we can likewise accept the fact that life is meaningless, and it is at this time that we are capable of living fully.
Our lives become a constant revolt against the meaninglessness of the universe and we can finally live freely. All at once the universe is quieted, the gods that might wish to control us cease to exist. Our lives become our lives alone, not dictated by any outside force. Our fate becomes a human matter that can only be settled among men. 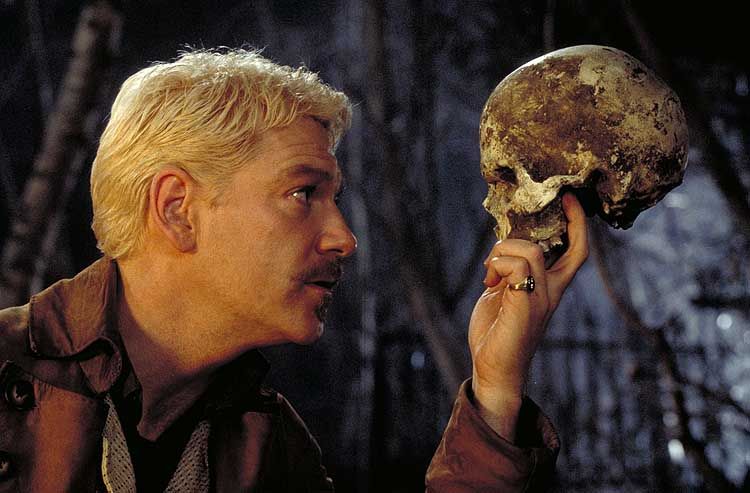 To accentuate this point, Camus retells the horrors of Oedipus. A man who tried to outrun fate, he inadvertently falls prey to it. It is only near his final hours, when he is blind and broken, does he cry out “…all is well”. Oedipus has accepted his condition, accepted his actions as his own. And he is free. Camus points to this as the recipe for victory for the absurd hero. He writes… “Ancient wisdom confirms modern heroism”.
The legend of Sisyphus would appear tragic. A man condemned to struggle eternally, he never accomplishes anything of value. The philosopher Albert Camus would tell us that, much like Sisyphus, our lives are devoid of any real meaning or purpose. Our struggle to find purpose that does not exist is the root of human despair. It is only when we accept the absurdity of life, only when we rebel against the meaninglessness of the universe, do we truly become free. Life is lived all the better if it has no purpose. We become captains of our own ships, authors of our own story. And it is only at our most fragile, most uncertain times that we may say ‘All is well’…
Facebook