In order to properly understand the setting of this myth and to become familiar the birth of the Olympians , be sure you read In Be Beginning, which can be found here. 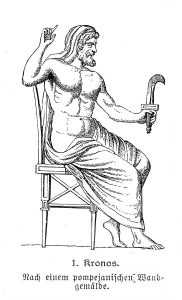 Cronus as the the King of Heaven

After Cronus overthrew his father and former ruler of heaven Uranus, he married his sister Rhea. Together they ruled over the universe and for a time, things were peaceful. However, the prophecy of Uranus deeply troubled Cronus. It had been predicted that a son of his would one day depose him and take his place as king.
The entire narrative was detailed by the poet Hesiod in his ancient poem, The Theogony. The poet describes how Rhea fears for her children, yet is in love with Cronus. Hesiod writes:

“But Rhea was subject in love to Cronos and bare splendid children”- Hesiod, from The Theogony

Rhea bore several children,  Hestia, Demeter, Hera, Hades, and Poseidon, but Cronus feared that one of these children would be his downfall. And so, with each birth, Cronus captured the young infant and devoured the child to ensure that his reign as king was never opposed.
Rhea was terrified and deeply saddened to see her children mercilessly devoured by her husband. When it came time for Rhea to give birth to her youngest child, Zeus, she hid away to escape the wrath of her spouse. With the help of Gaia, the earth, she delivered her youngest child in a cave on the island of Crete, far from the eyes of her murderous partner. 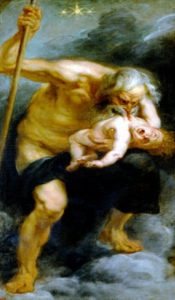 The young Olympian Zeus was left on the island. His mother wrapped a stone in a blanket and presented it to Cronus. The titan devoured the substitue, believing it to be his son. Assured that the baby Zeus was no longer a threat, Cronus continued his rule, though unbeknownst to him, his youngest son was being raised in secret under the Aegean mountains. Some versions of the myth describe that the infant Zeus was raised on the island of Crete surrounded by armored dancers. These armored guardians would clap and sing whenever the baby would cry so that Cronus would not hear the screams and come to slay the infant god.
Zeus grew quickly, and when he came of age, he became determined to confront his father and take his place as ruler of the heavens. His grandmother, Gaia, gave him an emetic that would force Cronus to regurgitate the children he had devoured. Cronus bent over in agony and threw up all the children he had devoured. Poseidon, Hades, Hera, Hestia, and Demeter were brought to life again, now fully grown.  In some versions it is told that Zeus cuts open his fathers stomach with a dagger and his siblings come pouring out. 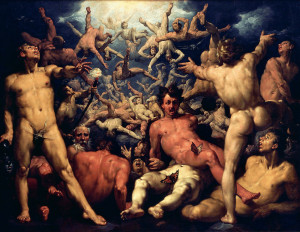 The Olympians casts the Titans into Tartarus
painting by. cornelis van haarlem

It was at this point that a violent war waged for ten long years. On one side was the Olympians who were aided by the Cyclops, the Titans Prometheus and Epimetheus as well as the hundred armed  Hecatonchires. They waged war against the original Titans and the Giants that had been born from the blood of Uranus.
The violent war was fought for ten years with no clear victor. Zeus and his allies took up a stronghold on mount Olympus where Zeus cast his thunderbolts upon his enemies. After much battling, the Olympians were victorious over the Titans. Zeus cast his father and the other Titans into the depths of Tartarus, the prison of the underworld.  There they would remain for eternity, while their children ruled the universe. The prophecy of Uranus had been fulfilled, the age of the Olympians had arrived.
Facebook