Memnon: the Mythical King of the Ethiopians | Classical Wisdom Weekly 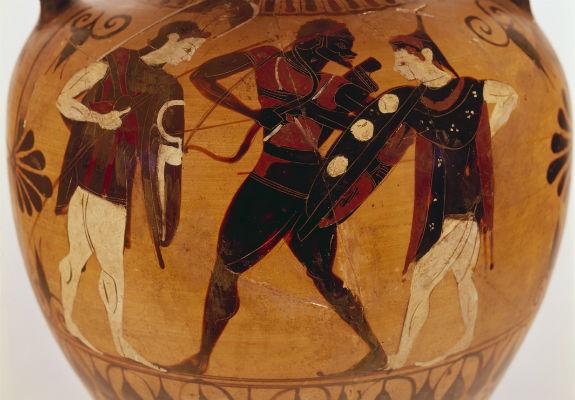 Memnon: the Mythical King of the Ethiopians

by Ed Whelan, Contributing Writer, Classical Wisdom
One of the most remarkable figures in all of Ancient Mythology is that of Memnon. He was a great hero, not Greek nor Roman, but an African. He was a king of the Ethiopians and he played a critical role in the Trojan War.
Origin of Memnon
Memnon was the son of Tithonus, a prince of Troy, and Eos, the goddess of the Dawn. According to legend the goddess swept the Trojan Prince away and took him to the farthest reaches of the earth, known as Oceanus in Greek mythology. The goddess of the Dawn bore the Trojan a son. He was referred to as bronze-armed Memnon and he grew up to be a great warrior.
Memnon enjoyed the great favor of the gods and he retained it for all his life. At some point, Memnon became the king of the Ethiopians. This was an area due south of Egypt and it encompassed not only modern Ethiopia, but also what is now Northern Sudan. Memnon ruled a great kingdom and commanded a large army.
As a warrior, he was considered to be superior of all the Greek heroes, except for Achilles. Some stories claimed that he conquered great swathes of the east. He was considered to be a very handsome man and possessed all the masculine virtues. It appears that he maintained close ties with the home city of his father. At some point Memnon married a Trojan Queen, Troana Ilium.
Little is known about the early life of the great hero because the epic poems based on his life have sadly been lost.
Memnon and the Trojan War
When Achilles killed Hector, it appeared that Troy, without its great champion was doomed. Priam, the King of Troy implored the Gods to help him and his people in their darkest hour. The Gods heard his pleas and told Memnon to leave Ethiopia to fight the Achaeans. According to a post-Homeric account of the Trojan War, the Ethiopian king traveled to Troy with a huge army. This included specialist units and soldiers that all had ‘a terrifying warlike appearance’. He and his men were so numerous that they had to camp outside the walls of the city because it could not accommodate them all.
Memnon and the Trojans attacked the Greeks and a brutal battle ensued. The Ethiopian king was described as riding in a chariot and killing many Greeks. Then in many accounts, Memnon dueled with Antilochus, the son of Nestor. After single combat Memnon killed Antilochus, who was considered to be one of the greatest warriors in all of Greece.
After the death of Antilochus, the Greek army panicked and was driven back almost to their ships; it seemed that they were on the verge of a complete defeat. Then along came mighty Achilles and he challenged Memnon to single combat. The two great heroes were evenly matched. While the two were both the favorites of the Gods, the Olympians agreed not to help one or the other.
In the fight, Achilles was simply too quick and strong for Memnon. He was able to thrust his spear through the shield of the Ethiopian King, pierce his side and then he finish him off with a thrust of his sword to the throat. With the death of their leader, the mighty Ethiopian army fled in terror. According to legend, some stayed with their king to bury him and they were turned into birds that would remove the dust from their dead lord’s tomb.
One story relates that the Gods collected all the spilled blood of the hero and turned it into a mighty river. On the anniversary of his death, it would turn red.
According to another tradition, Zeus, the king of the gods, was so moved by the tears of the goddess of the Dawn that he raised Memnon from the dead and he became become immortal.
The legend of Memnon
Both the Romans and the Greeks revered him. He was the subject of many works of art. Memnon’s image appeared on vases and there are many sculptures depicting the great Ethiopian. Tragically, a Greek epic poem on his death has been largely lost, and we only have fragments of the work.
There are many who believe that Memnon was possibly based on an Egyptian Pharaoh. Some academics argue that instead it was one of the Nubian kings from the Kushite Dynasty, that ruled Egypt for over a century. Others still think that he was based on the great Egyptian ruler, Amenhotep III.
When the Romans conquered Egypt, they believed that many of the statues of Pharaohs represented Memnon. The statues of Amenhotep III, of the 18th Dynasty, were called the Colossi of Memnon by the Romans. One of these statues was believed to have made sounds when struck by the light of dawn.
References:
Griffith, R. D. (1998). The origin of Memnon. Classical Antiquity, 17(2), 212-234.
Cline, E. H. (2013). The Trojan War: A Very Short Introduction (Vol. 356). Oxford University Press.
Facebook