By Edward Whelan, Contributing Writer, Classical Wisdom
Mount Olympus, located in the Olympus range in the North of Greece, is one of the highest mountains in all of Europe. Today the mountain is in a National Park but once this snow-topped mountain was seen as the home of the all-powerful Greek Gods.
What Is Mount Olympus?
From the time of Homer, Mount Olympus was regarded as the home of the Gods in Greek mythology, purportedly made by the Olympian Gods themselves. According to legend, the Titans, who were the older gods, battled with the younger gods, the Olympians, for control of the world. When the young gods defeated the Titans, they celebrated their victory by building the mountain. The cloudy peaks were believed to be a screen created by the deities to hide themselves from humans’ prying eyes.
What was Olympus like?
To the Greeks, Mount Olympus was a home that was truly fit for the Gods. With great climate all-year-round, it was a veritable paradise. It was surrounded by a gate of clouds, which was in turn guarded by the God of the Seasons. Through these gates the Olympian gods would descend to earth to receive sacrifices or occasionally intervene in human affairs.

Assembly of 20 gods in Olympus, a painting by Raphael

The best description of the home of the Gods is in the epic poem the Iliad.  There it describes a great Palace in Olympus, including the thrones of Zeus, father of the gods, and his wife Hera.  Zeus’ palace was the main structure in Olympus. The tables and other furnishings were all made by the God Hephaestus and they were actually elaborate automatons that would bring food and drink in when required. The gods would meet in the Pantheon, near Zeus’s palace; this was where the gods would assemble before the throne of the father of the Gods. The gods of the earth, rivers, seas and the nymphs would also gather to hear the commands of Zeus and his judgments.
Every god who lived on Mount Olympus had their own palace made of gold, precious jewels, and stones. There are a number of peaks on the mountain and naturally Zeus’ palace was on the highest peak. Many have noted the similarities between the Homeric version of Olympus and an ancient Greek acropolis, which was a citadel on high ground overlooking the city.
Who lived on Mount Olympus?
All of the 12 Olympian Gods lived on the Mountain, including Zeus, Hera, Poseidon, Artemis, Athena, Aphrodite, and Demeter. All the great deities lived there, with the exception of Hades, the God of Death, who had his own realm and never visited the other Olympian deities.
It was believed that the Nine Muses all lived at the foot of the Mountain. They were responsible for the arts and would occasionally entertain the Olympian gods.
The defeat of Typhon
Not long after the Gods build Olympus they were attacked by the monster Typhon. He was a huge creature and had one hundred dragon heads, who all breathed fire. This monster was the son of Gaia, the personification of Earth. When Typhon attacked the home of the Gods, all of them fled apart from Zeus, Athena, and Dionysus. Typhon and Zeus engaged in a cataclysmic battle, but the Father of the Olympians emerged victoriously. He was able to defeat Typhon by striking each of his 100 heads with a thunder or lightning bolt. Later Zeus cast the monster into Tartarus abyss or buried it under Mount Etna in Sicily. 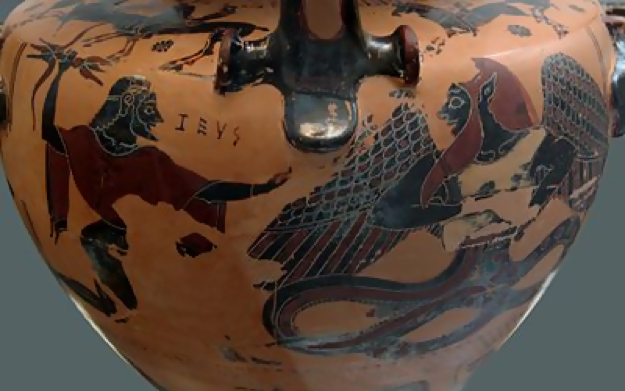 Zeus fighting Typhon from the 4th century BC Vase

How the Gods live on Olympus
The Gods mostly enjoyed themselves in Olympus. It was believed that they held great feasts, drank nectar and ate ambrosia on the mountain. The latter was important as it helped keep them immortal. When they were at home they would often view the fate of humans. Many of the gods had favourite heroes and humans whom they tried to support. Homer portrays the gods as spectating on the pain and suffering of humans with at best, indifference, and more than often with pleasure. In the Iliad, the gods are fascinated by the Trojan War; some are shown as supporting the Greeks and others the Trojans.
The myth of Bellerophon
While Zeus ordained that no human could ascend Mount Olympus upon pain of death, Bellerophon tried to enter the home of the Gods. According to legend he was a Corinthian hero, famous for killing the monster Chimera. Bellerophon was a favourite of the Goddess Athena and she helped him to capture the winged horse Pegasus. He became so proud, however, that he wanted to join the Olympians, an act of hubris or offense against the divinities. As he was flying towards the holy mountains, Zeus sent a fly to sting Pegasus. When the fly did sting the mythical horse, he threw Bellerophon, who fell to earth and died.
The sacred city of Dion
At the north-east foot of the mountain was the holy Macedonian city of Dion. This was dedicated to Zeus and the other Olympian Gods. It was an important ritual center, full of palaces, temples, and villas. It flourished from the 5th century BC until the Christianization of Greece in the 4th century AD.
Facebook