Master of Stories: Odysseus in the Kingdom of the Dead

Just as the adventures described in Books 9-12 of the Odyssey are often the most-remembered episodes due to their fantastic character, so Odysseus’ account of the underworld is one of his most striking. But did it “really” happen? Are we meant to believe that, within the horizon of the poem, Odysseus actually traveled to the underworld—or is he telling another tall tale?

Of all the stories Odysseus tells the Phaeacians, his account of the underworld is the only one to contain an interruption, emphasizing that this is a story being told to an audience. Odysseus pauses to suggest that it may be time to break off story-telling and go to sleep. But King Alcinous urges him to continue: “The night’s still young, I’d say the night is endless. For us in the palace now, it’s hardly time for sleep. Keep telling us your adventures—they are wonderful.” Odysseus is spinning a yarn to please a king from whom he has much to gain, and the King wants more.

Alcinous prompts Odysseus by asking if he saw any heroes in Hades: “But come now, tell me truly: your godlike comrades—did you see any heroes down in the House of Death, any who sailed with you and met their doom at Troy?”  His host and benefactor has indicated a subject he would like to hear about, and Odysseus obliges in style, dropping a great many well-known names to help set the stage. 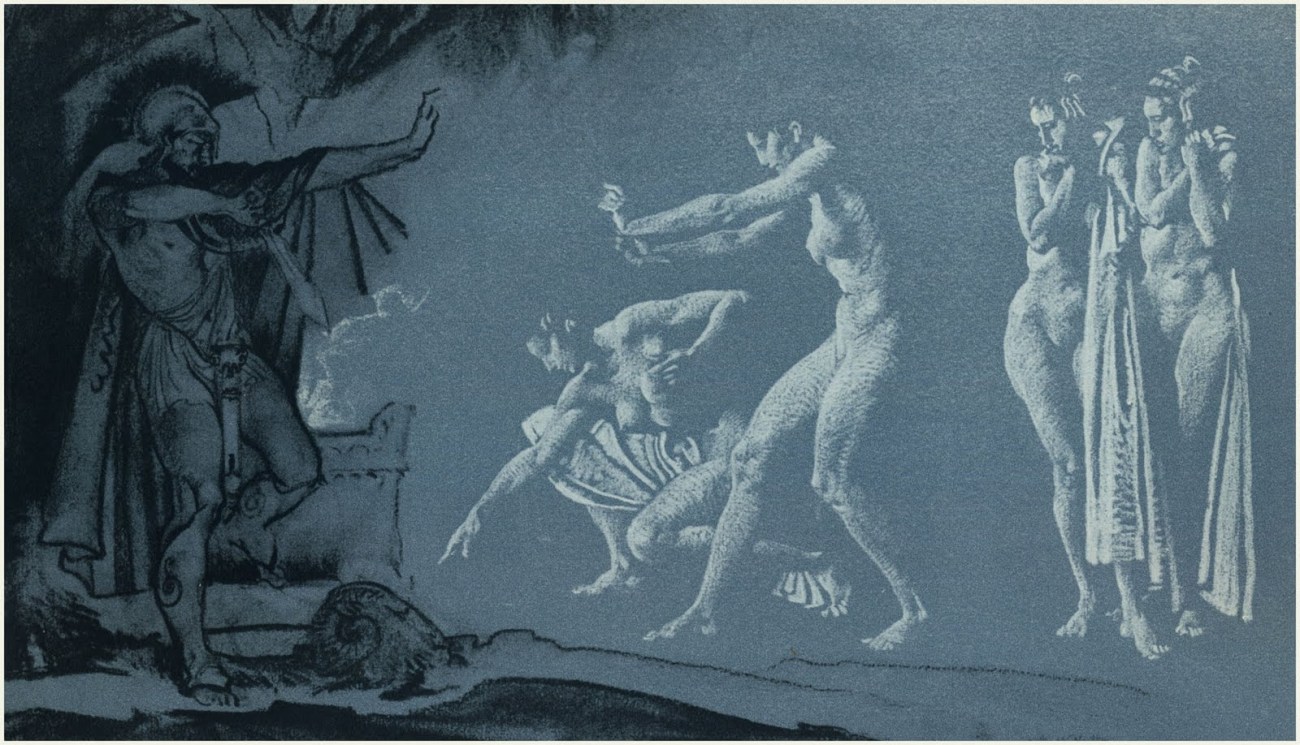 Odysseus in Hades by Russell Flint

But if this is theater—if Odysseus is not relating something that “really” happened—what are we to make of this tale?

The story of the underworld can be seen as an expression of the hopes, fears, and doubts of a man who has been away from home for a very long time. These feelings are the material around which Odysseus builds his story. The driving themes are laid out when he questions his mother in the underworld:

‘But tell me about yourself and spare me nothing. What form of death overcame you, what laid you low, some long slow illness? Or did Artemis showering arrows come with her painless shafts and bring you down? Tell me of father, tell of the son I left behind: do my royal rights still lie in their safekeeping? Or does some stranger hold the throne by now because men think that I’ll come home no more? Please, tell me about my wife, her turn of mind, her thoughts…still standing fast beside our son, still guarding our great estates, secure as ever now? Or has she wed some other countryman at last, the finest prince among them?’ (Odyssey XI.193-205) 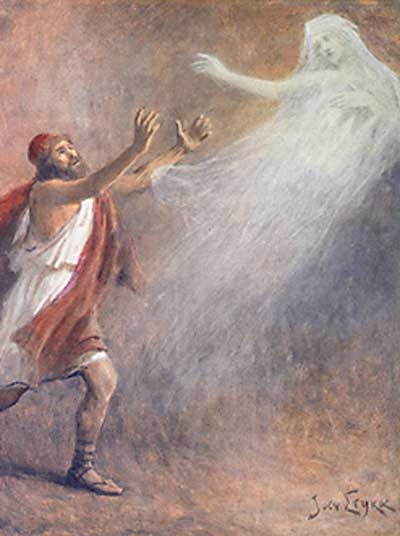 Odysseus attempting to embrace the ghost of his mother in the Underworld, by Jan Styka, 1901

Anyone in Odysseus’ shoes would wonder if their aged parents were still living. The other concerns, also very natural, are reflected not only in these questions, but also in his conversations with the other shades. These concerns can be characterized as follows:

1) The faithfulness of his wife

2) The fortunes of his son

In the underworld, Odysseus is first confronted with a great crowd of wives and daughters of princes, whom he interviews one by one, reflecting his anxiety for the purity and success of the household. These women represent the theme of womanhood—some are faithful, some treacherous (unfaithfulness to the marriage bed receives much attention).

His conversations with dead heroes reflect the same anxiety. Agamemnon tells the awful story of how he and his men were slaughtered through the machinations of a treacherous wife and the lover she took in his absence.

But Odysseus reassures himself about Penelope’s character using Agamemnon’s voice: “Not that you, Odysseus will be murdered by your wife. She’s much too steady, her feelings run too deep, Icarius’ daughter Penelope, that wise woman.”  Yet doubt still remains, as is evident the circumspect way he deals with her upon his homecoming.

Agamemnon also enquires about his son, Orestes. Odysseus must be wondering what kind of man his own son Telemachus has become, and how he is faring. Odysseus’ words about Orestes could just as truly be spoken of his own son: “I know nothing, whether he’s dead or alive.” Achilles also asks after the fortunes of his son. In Odysseus’s response we may see his hopes for Telemachus—that he will take his place among great men, proficient in feats of war and good counsel.

The Shade of Tiresias Appearing to Odysseus during the Sacrifice (Book XI of the Odyssey), by Johann Heinrich Füssli (c. 1780-85)

Achilles brings up another concern likely to resonate with Odysseus: the honor of his father and house without him there to defend them. Odysseus has already asked his mother about such things, and in Achilles’ comments we catch a glimpse of the thoughts of a son who returned to find his father abused and the honor of his house diminished: “Oh to arrive at father’s house—the man I was, for one brief day—I’d make my fury and my hands, invincible hands, a thing of terror to all those men who abuse the king with force and wrest away his honor!”

The story of Odysseus’ journey to the underworld underlines our common humanity and the ever-lasting value of classical works. Thousands of years after its composition, readers can still identify with the hopes and fears of the hero of the Odyssey.

Posted in Homer - No comments