How the Spider Came to Be

Or, The Girl Who Told the Truth about the Gods
By Nicole Saldarriaga, Contributing Writer, Classical Wisdom

I’d take a look at the humble spider. Though spiders may not qualify as the most terrifying of creatures, their inclusion in a popular myth about Roman goddess, Minerva, certainly clues us into what the Greeks and Romans found chilling. I’m speaking here about the myth of Arachne, of course.
Though it’s considered one of the “lesser myths” of Greco-Roman mythology—probably because it’s not quite as detailed as other myths—it still gives us wonderful insight into ancient culture. Essentially, it functions as three different things: a moralistic warning, a subtle jab at the gods, and an origin story.
Before we get into the details of the myth, however, it’s important to point out that—like most myths—Arachne’s story has warped and changed over time, resulting in a few different versions of the myth. We’ll be focusing on the most well-recorded version, which can be found in that great book of transformations, Ovid’s Metamorphoses. 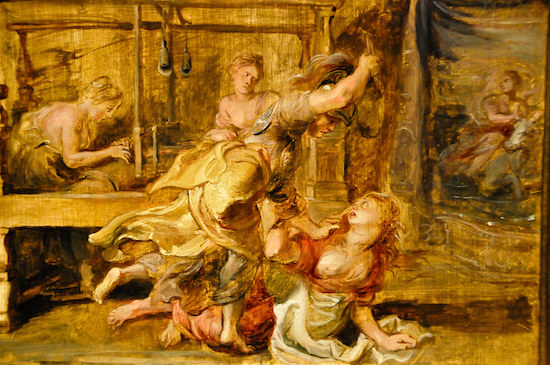 According to Ovid, Arachne was the beautiful young daughter of a simple shepherd. She took up the craft of weaving at a very young age and quickly demonstrated an incredible amount of talent. As she grew into a young woman her talent only grew with her, and many people gathered to see her beautiful tapestries or to simply watch her at the loom—a sight that was said to be mesmerizing.
However, after years of having her work effusively praised, Arache gets a bit cocky. She begins to boast that her work is more beautiful than Minerva’s (the Roman equivalent of Athena). 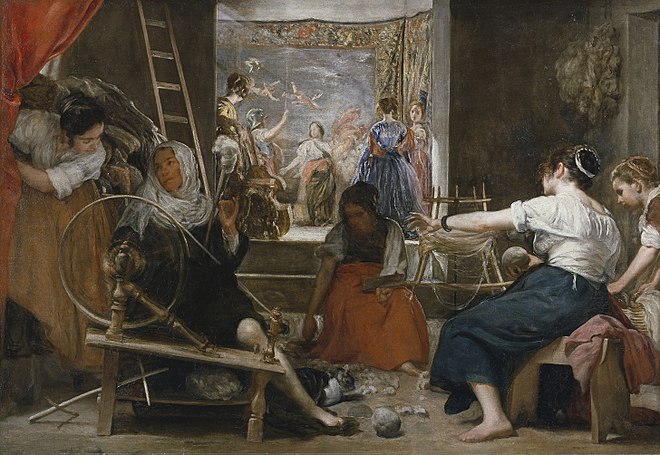 Keep in mind here that Minerva is to weaving what Vulcan is to smithing—she is considered the patron goddess of the craft, yet Arachne refuses to acknowledge Minerva’s hand in her great talent and even claims superiority. As you can imagine, this is incredibly infuriating to the goddess.
So, Minerva does what most of the Greco-Roman gods and goddesses seem to do when a mortal ticks them off— she disguises herself and pays Arachne a little visit. Appearing as an old crone, Minerva warns Arachne that she should not boast so carelessly, and that she should beg the goddess for forgiveness:
“Not everything old age has is to be shunned: knowledge comes with advancing years. Do not reject my advice: seek great fame amongst mortals for your skill in weaving, but give way to the goddess, and ask her forgiveness, rash girl, with a humble voice: she will forgive if you will ask.” 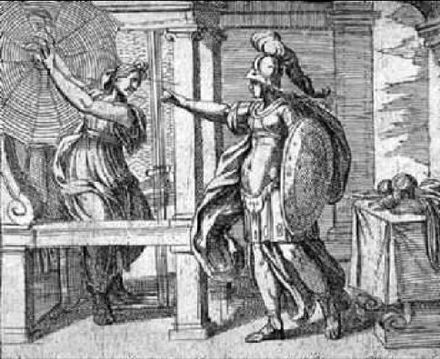 Arachne responds with surprise and rage:
“Weak-minded and worn out by tedious old age, you come here, and having lived too long destroys you. Let your daughter-in-law if you have one…listen to your voice. I have wisdom enough of my own. You think your advice is never heeded: that is my feeling too. Why does [Minerva] not come herself ? Why does she shirk this contest?”
Enraged by Arachne’s impudence, Minerva reveals herself as the goddess (which, interestingly, barely affects Arachne), and the two ladies challenge each other to a contest: whoever can produce the most beautiful, the most flawless tapestry wins. In order to ensure fairness, the contest would be judged by the goddess Envy. 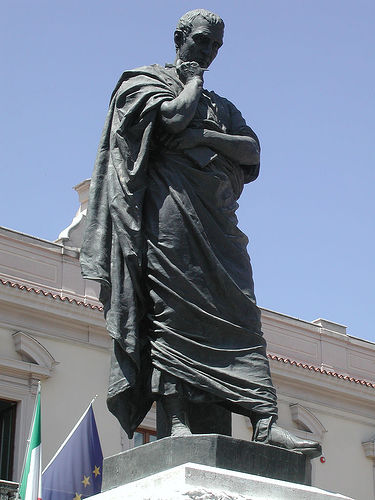 So, goddess and mortal sit down to work, and both produce beautiful—but incredibly different tapestries. Ovid spends a relatively lengthy amount of time describing the scenes woven into each tapestry, and for good reason. Minerva weaves a perfectly symmetrical tapestry that depicts the glory of the gods (and her own glorious achievements in particular) in the center, and four separate corner scenes depicting mortals who were severely punished for challenging or insulting the gods. The work is technically flawless, and stunning.
Arachne, on the other hand, weaves a very different tapestry. While hers is also gorgeously worked, it depicts the gods in a very unfavorable light. The tapestry is packed with scenes of gods raping women, deceiving innocent mortals, and generally displaying embarrassing behavior.
Minerva is completely outraged at this further sign of arrogance and insult—and is only angered more by the undeniable fact that the tapestry is perfect. There is no clear winner, but Minerva can’t contain her rage– she tears the offensive tapestry into pieces and begins to beat Arachne with her shuttle (a tool used for weaving). 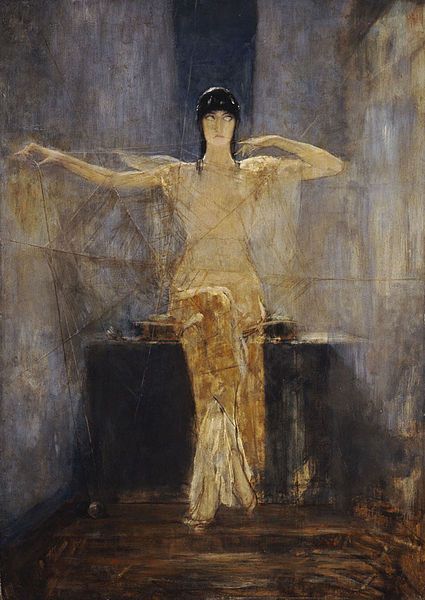 Arachne can’t bear this abuse, and suddenly hangs herself. This extreme reaction actually causes Minerva to feel pity for Arachne, and the goddess chooses to bring Arachne back to life—but in the form of a spider, so that Arachne can both continue to weave and continue to “hang.”
“Live on then,” says Minerva, “and yet hang, condemned one, but, lest you are careless in future, this same condition is declared, in punishment, against your descendants, to the last generation!”
There you have it—the creation of the first spider; but as I mentioned earlier, this myth is much more than a simple origin tale for those creepy-crawlies you find in your basement. The basic function of the myth is, of course, to act as a warning.
Like many of the transformation myths found in the Metamorphoses, Arachne’s story is a reminder to never challenge the gods. No matter the validity of your claims, it will not go well for you—that is a guarantee.
But Arachne’s story is also interesting in that it subtly shows us an unpopular opinion about the gods. It’s no secret that the Greco-Roman pantheon is made up of gods who are flawed, petty, and often cruel. Arachne could not ignore this and paid the price for calling attention to it.
In fact, this myth is much more than just a warning— because in the end, it’s very important for us as modern readers to recognize that even the ancients were well aware that their gods were flawed. It may have been unpopular and even dangerous to express this opinion, but the opinion existed, there is no doubt. 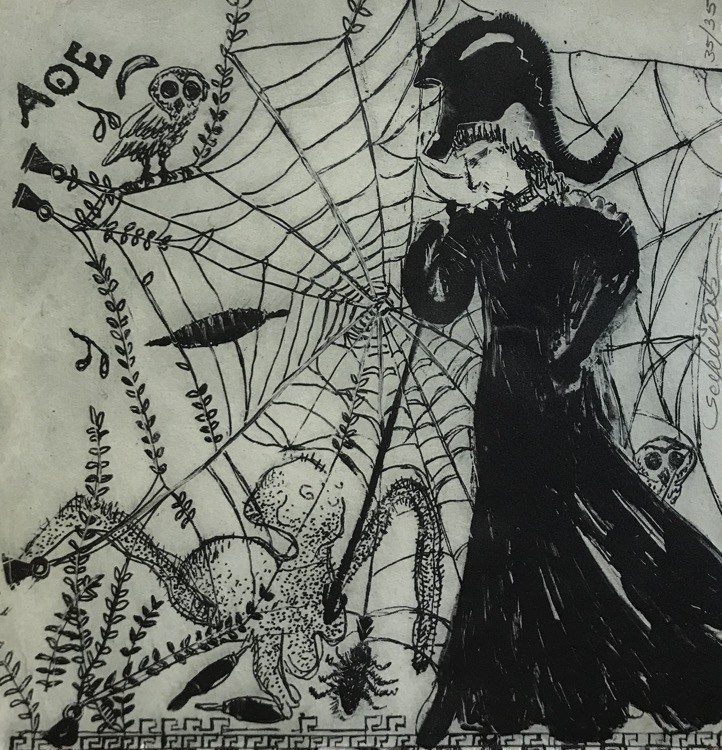 Arachne and Athena by Lisa Sewards

Even more interesting is the fact that in the myth itself, the two different perspectives expressed by Minerva and Arachne are both actually substantiated. Minerva punishes Arachne for her insolence, just like the mortals on her tapestry were punished. She clearly believes that the gods have that natural right to command respect.
Arachne, on the other hand, whose tapestry displays mortals being treated unfairly and horribly hurt by the gods, is in fact reprimanded and beaten by Minerva.
Because of this, we could theoretically argue that Arachne’s behavior is not truly arrogant. Instead, it’s simply an example of a young woman telling the truth about her world as she perceives it, and being severely punished for doing so—and that is an entirely different sort of warning. One that, as modern readers, we must hope no longer applies today.
Facebook