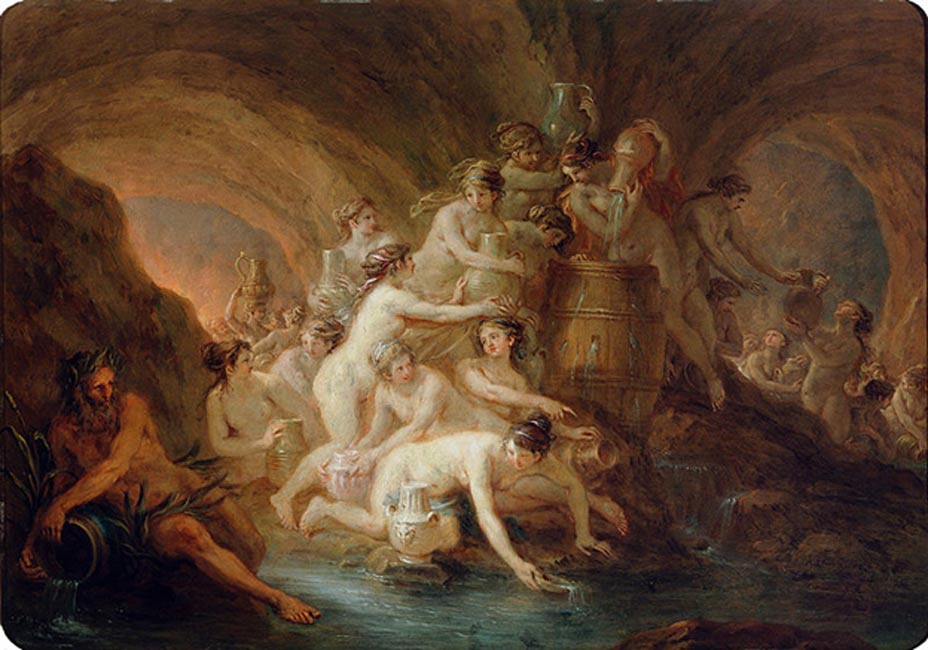 The ancient Greeks had no problem painting their mythological women as murderesses. Among the most lethal ladies were the Danaids, the fifty daughters of a king whose crimes condemned them to Sisyphean fates in the Underworld. But what was so bad about them that the Roman poet Horace dubbed these bad girls “Danaus’ seed / Ill-famed”?
The Greek Royals of Myth
The story begins, as most Greek myths do, with genealogy. Danaus and his twin brother, Aegyptus, were part of one of Greek mythology’s most regal families according to Pseudo-Apollodorus. This clan produced the likes of Perseus, Heracles, and Argos the many-eyed guardian.
Everything began when the river-god Inachus had a daughter, Io, who was a priestess of the goddess Hera in Argos; Zeus fell head-over-heels for her, swept her up, and turned her into a cow to protect her from her former divine mistress, Hera. Of course, Io wound up pregnant and, after being chased by a gadfly sent by Hera, she gave birth in Egypt to a son she named Epaphus. 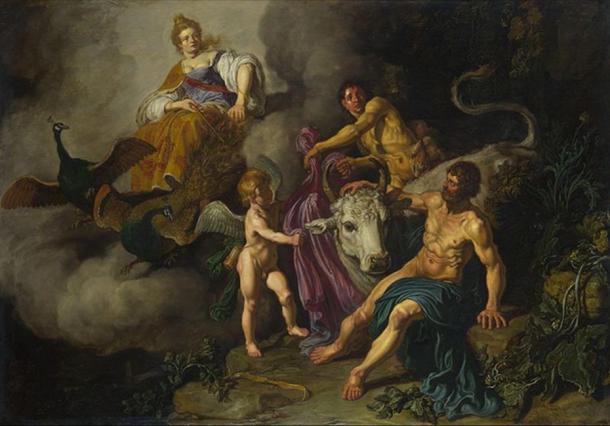 Eventually, Epaphus became king of Egypt (talk about appropriating other cultures’ mytho-histories to make that culture your own!). He fathered a daughter, Libya, who gave her name to the modern country. By Poseidon, Libya had twin boys, Agenor and Belus. You might know Agenor from his own illustrious descendants; as Pseudo-Apollodorus gushes, “Agenor departed to Phoenicia and reigned there, and there he became the ancestor of the great stock,” which included Europa (mother of King Minos) and Cadmus (founder of Thebes and ancestor of Oedipus). Belus, however, stuck around in Egypt and had twins: Danaus, father of the Danaids, and Aegyptus, whose name Homer and co. bestowed upon modern Egypt.
The Daughters of Danaus
As adults, Danaus and Aegyptus (who had fifty sons) got into a horrible fight. “As they afterwards quarreled concerning the kingdom, Danaus feared the sons of Aeyptus,” Pseudo-Apollodorus says, so Danaus packed up his daughters and fled to Greece, winding up in his ancestral town of Argos.
But Aegyptus’s fifty boys followed him, begging their uncle to forgive them—and to give them their cousins as brides! Danaus wasn’t loving it, but one might imagine that a king new to his throne could use husbands for his fifty girls. Those young men would also help him defend his realm. So he agreed to wed his fifty daughters to his fifty nephews…but with a twist. Danaus assigned each daughter to a nephew, but gave every one of his girls a dagger to use to kill her untrustworthy husband on her wedding night. What would make them do such a thing? 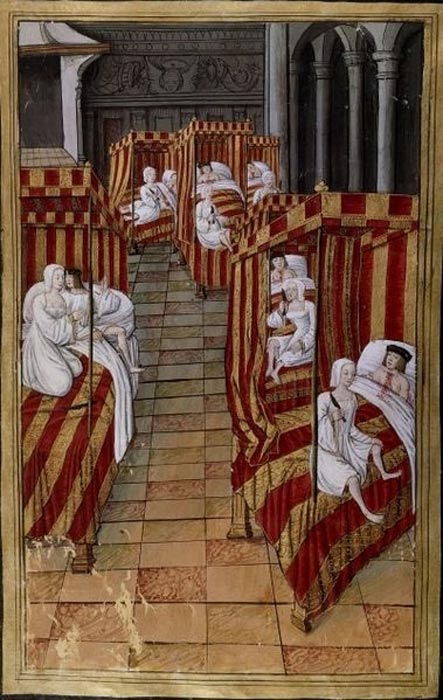 The Crime of the Danaids
In Aeschylus’s play The Suppliants, in which the Chorus is composed of Danaids deemed as Egyptian barbarians, the women excuse their violence by saying they each wished to avoid “a sinful marriage with the sons of Aegyptus.” They cry that they are “scared in soul” of these men and note that their cousins are prideful, lustful, and all-around bad guys.
The Aegyptids aren’t good Greek men, they say, but violent, impious, and rapacious. In the play, the Chorus deems the cousins’ marriage as sinful, but Danaus persuades them to wed their relatives to make alliances – his armed nephews are after him and his girls, and the last thing Danaus wanted was war.
“What followed is known to all alike: the crime the daughters of Danaus committed against their cousins,” recalls ancient travel writer Pausanias. The “crime” was how all but one of the Danaids assassinated their husbands before consummating their relationship. 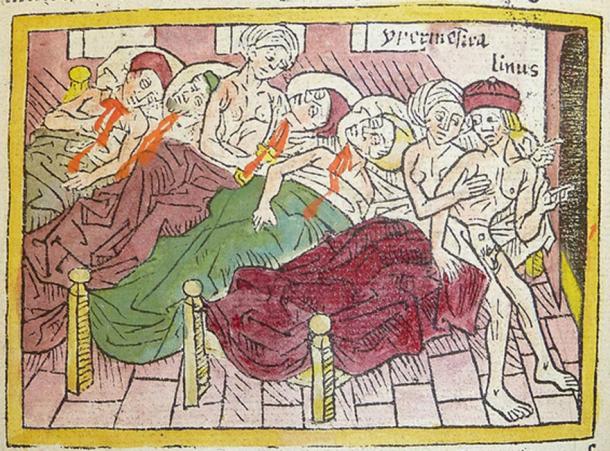 Woodcut of 49 of the Danaids killing their husbands, while one tells her partner to flee. ( kladcat/CC BY 2.0 )

After killing their partners, forty-nine of the Danaids “buried the heads of their bridegrooms” and “paid funeral honors to their bodies in front of the city,” Pseudo-Apollodorus writes. Luckily for the Danaids, Hermes and Athena, on dad Zeus’ instructions, purified them. But after death, the forty-nine murderesses supposedly suffered a particularly nasty fate in the Underworld.
As Ovid notes in his Metamorphoses, they were engaged in a futile punishment for all eternity, similar to Sisyphus’ task of attempting to roll a boulder up a hill again and again. The Danaids had to draw water from a well (or, depending on the account, wine from craters), but the jugs they used had holes in them, so the liquid would flow away…and then they’d have to start again. Forever. 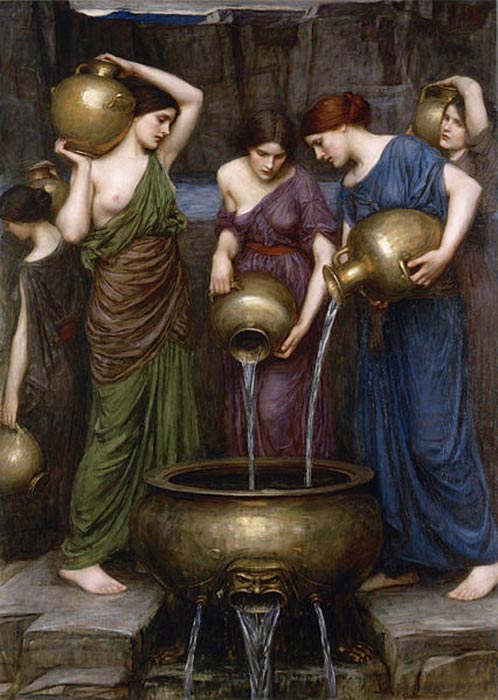 Hypermnestra and Lynceus
So who was the one daughter who avoided this fate and saved her spouse? Her name was Hypermnestra, and she spared her bridegroom, Lynceus, because he respected her choice to remain a virgin for the time being. Furious at her disobedience, Danaus locked her up, but eventually let her return to her husband. He also found husbands for his other girls by offering their hands to winners in athletic contests.
Hypermnestra and Lynceus lived happily ever after. Their son, Abas, reigned over Argos, but he too had a set of troublesome twins – Acrisius and Proteus. Like any set of twins in Greek myth, these two fought—and, in the case of Acrisius, went on to father a dynasty of demigods (he was the grandfather of Perseus, who was in turn ancestor of Heracles). 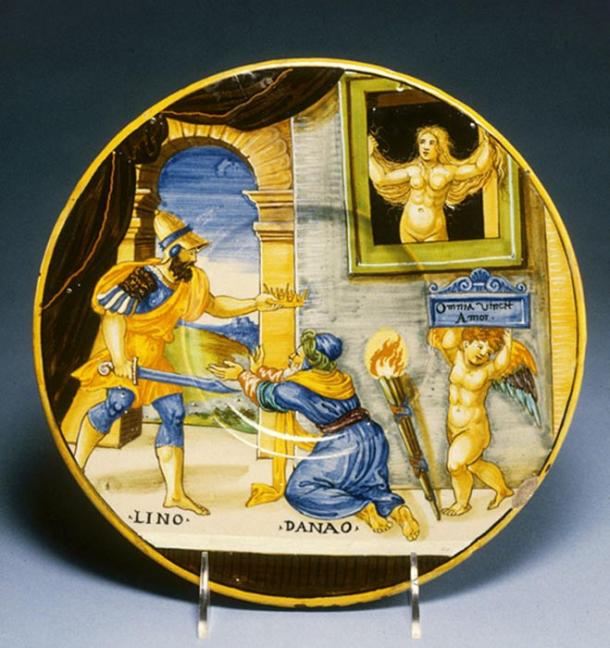