The Mystery of Plato’s Atlantis (part 2) 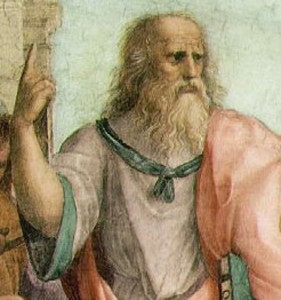 In a previous article we discussed the legend of Atlantis and how the ancient philosopher Plato, left us clues to the rise and fall of this island civilization. It is in Timaeus and Critias, two of Plato’s later dialogues, that we learn about the the nation of Atlantis that existed peacefully for generation,  and how it vanished beneath the waves after a failed invasion of Athens.

It is important to keep in mind that these essays by Plato are not historical texts, objectively verified and confirmed. In the same dialogue where Plato recounts the history of Atlantis, he also retells the story of the Phaëton, son of the god Helios, who drove a chariot of fire across the sky. It would be logical to assume that Atlantis is also myth. After all, it’s history is revealed to us by the character Critias who claims that his grandfather visited Egypt to meet with the the ancient Athenian law giver Solon. It is in Egypt that Solon reveals that the history of Atlantis is scrolled on an ancient piece of papyrus in hieroglyphs.

Essentially we are left with several thousand years worth of spoken history. It is a game of telephone  that has been played throughout countless centuries. And we must simply take it on faith that Plato knew what he was talking about. It leaves most skeptical, if not completely assured that Atlantis is myth. However, there is still one hypothesis that challenges these doubts with real archaeological evidence, and points to a very real location to the lost civilization. 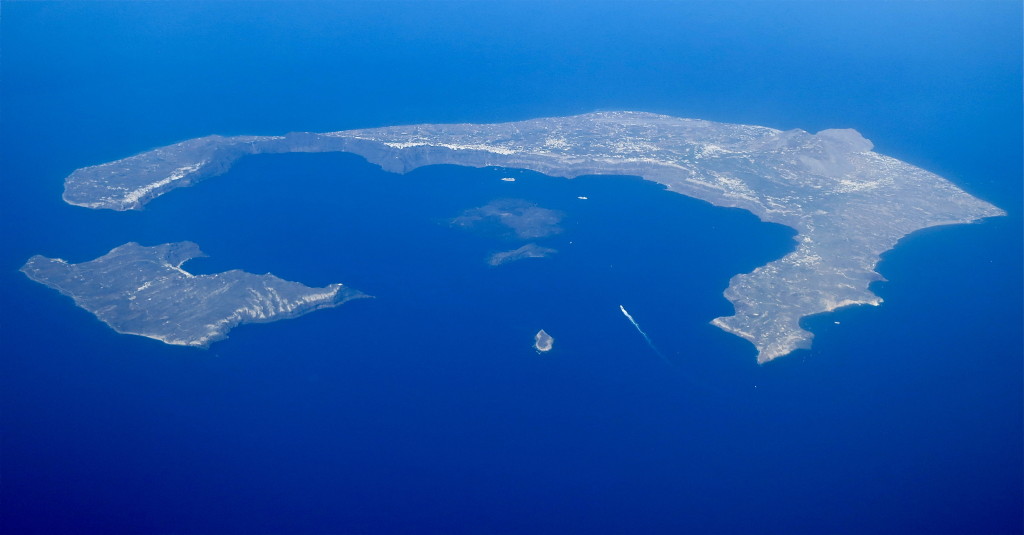 Santorini is a Greek island that rests atop an ancient caldera

The island of Santorini, classically known as the island of Thera, is a very real land mass located in the southern Aegean sea. Santorini exist now as a crescent shaped island with a massive lagoon surrounded by 300 foot high cliffs. It existed once as a large rectangular island before it was absolutely demolished by an ancient volcanic explosion some 900 or 1000 years before Plato wrote about the lost civilization.

This volcanic explosion would be later known as the Theran eruption. The giant crater that now forms the lagoon of Santorini is actually the remnants of an ancient underground caldera that collapsed after it’s earth shattering eruption thousands of years ago. It is hypothesized that this explosion created huge tsunamis that devastated the neighboring island of Crete and lead to the destruction of the ancient Minoan civilization. The land, and any civilizations, atop the caldera would have collapsed and sunk beneath the sea, just as Plato describes. 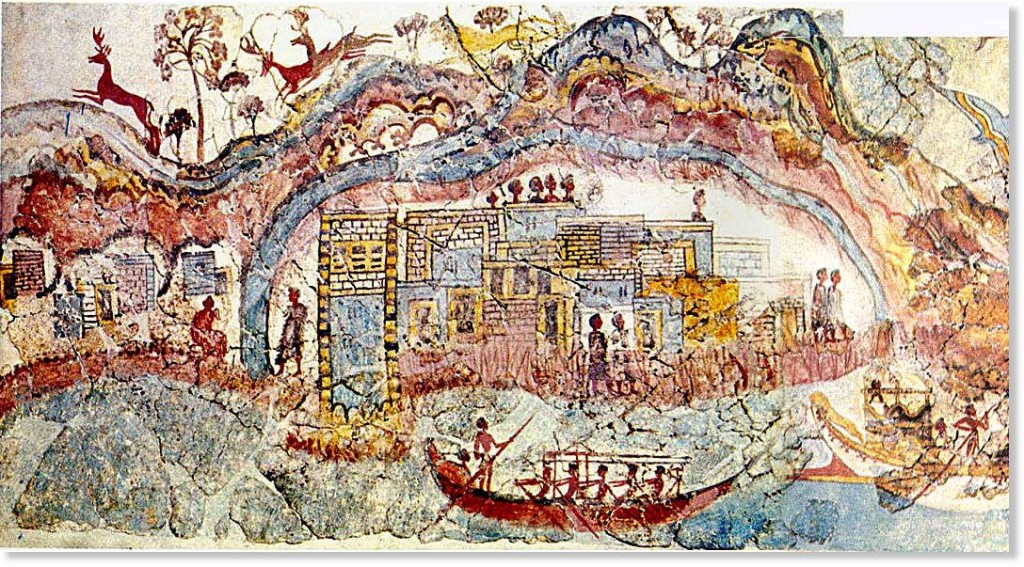 This fresco found in the ancient civilization of Akrotiri. It depicts and early Greek civilization that existed on the island before the volcanic eruption.

The idea that Santorini may have been the location of an ancient Atlantis gained currency in the 1960’s when excavation began on the small town of Akrotiri. Akrotiri is an ancient settlement on Santorini that was destroyed by the Theran eruption and subsequently covered in thick layers of dust and ash. When excavation began, archaeologists discovered perfectly preserved fresco’s that depicted the life of ancient Santorini.

When the ash was peeled away, pictures of ancient people fishing and navigating by boat were discovered. In the backdrop there is an island overrun with vegetation and wildlife, just as Plato described in his ancient texts. Could it be that these ancient fresco’s are the sole remaining evidence of an ancient Atlantis?
Even if it is believed that Santorini is the location of Atlantis, there are still several discrepancies between this island and the one described by Plato. For instance, Plato described that Atlantis existed 9,000 years before his lifetime. Also the island was said to have been more massive than Asia minor and Libya combined. How could Santorini be the island described by Plato? And even for this, there is an answer.
According to Plato, the story of Atlantis was handed down to the Greeks by the ancient Egyptians. It is hypothesized that a translation error would have lead the Greeks to believe that the Egyptian word for “hundred” actually meant “thousand”. If this is true ,then the destruction of  Atlantis would have been only 900 years before Plato. Also, the size of Atlantis would have been shrunk considerably. If a translation error had occurred, the size of Atlantis would have been roughly the size of the crater on the modern island of Santorini.
Whether Atlantis was a real civilization, or if it was merely myth, is a matter of debate. There were several of Plato’s disciples who defended him fiercely and claimed that Atlantis was, in fact, real. A neo-platonist Proclus wrote a response to Timaeus, where he states:

“As for the whole of this account of the Atlanteans, some say that it is unadorned history, such as Crantor, the first commentator on Plato. Crantor also says that Plato’s contemporaries used to criticize him jokingly for not being the inventor of his Republic but copying the institutions of the Egyptians. Plato took these critics seriously enough to assign to the Egyptians this story about the Athenians and Atlanteans, so as to make them say that the Athenians really once lived according to that system.” -Proclus (disciple of Plato).

Still, it is more popular to believe that Atlantis is fictional and may have been inspired by the events on Santorini. Plato told his philosophy through story. he discussed his ideas through the lens of myth and legend. And while the idea of an Atlantis is tantalizing, it is much easier to believe that Plato invented it as a means to discuss ethics of an ideal civilization.
We will never know definitively, even the ending of Plato’s own writings remain a mystery. In Critias, Plato describes the eventual moral downfall of Atlantis. They were once a proud civilization however “…human nature got the upper hand”.  Zeus would notice the decline of Atlantis and make plans to punish them. Plato writes:

“Zeus, the god of gods, who rules according to law, and is able to see into such things, perceiving that an honourable race was in a woeful plight, and wanting to inflict punishment on them, that they might be chastened and improve, collected all the gods into their most holy habitation, which, being placed in the centre of the world, beholds all created things. And when he had called them together, he spake as follows…” -Plato, from Critias

What Zeus said to the other gods, we will never know. The remaining text has been lost. Perhaps he devised a plan to sink Atlantis beneath the waves, punishment for their sins. We will never know what Plato’s final words were about the city of Atlantis. Much like the fabled civilization itself, the truth has been lost to the ages.
Facebook