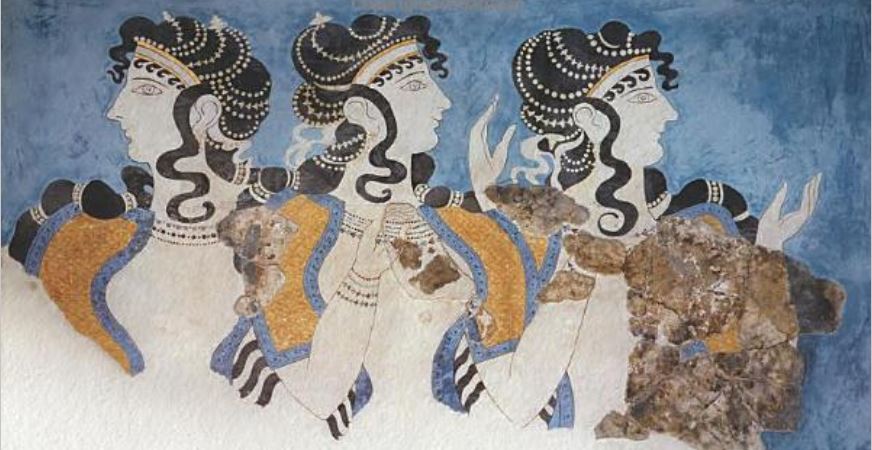 Women in the Odyssey: Goddesses, wives, lovers, and threats

By Ed Whelan, Contributing Writer, Classical Wisdom
Traditionally, Ancient Greece is seen as a patriarchal society and women were marginalized and oppressed.  Yet, despite this, some women were able to be independent and play an important role in the Hellenic World. In the Odyssey of Homer, women have a significant role in the 20-year travels of Odysseus as he tried to reach his kingdom in Ithaca. Their roles in the epic in turn reveal the different roles of women in Ancient Greek society and culture and how they were viewed by the male elite.
Goddess Athena
In the Greek Pantheon, there were many female Goddesses. Athena was the Goddess of War, strategy, and craftiness. Athena favors Odysseus because he honors her and she admires his qualities. She is the patron of Odysseus and the two share many of the same personality traits. After Odysseus is shipwrecked in the land of the Phaceians and he is at his lowest point, Athena inspires the young woman Nausciaa to get her people to help him. Homer shows that Odysseus could not have made it home without her intervention.
Nausicaa
Nausicaa was the daughter of the King of the Phaeacians Alcinous and his Queen Arete, who is shown as being the equal of her husband. Nausicaa is only a teenager, and Homer describes her as being as beautiful as a Goddess and very intelligent.  The young woman helps the hero when he was at his lowest ebb, alone and lost in the world. She falls in love with the Greek hero at first sight and she listens fascinated as he recounts his journey and tribulations.  Odysseus’ has feelings for her but does not return her love as he is married and wants to go home. Homer presents Nausicaa as in many ways the ideal of the Greek young women, innocent, caring and virtuous.
Penelope: the perfect Greek wife
Penelope is one of the most important characters in the Odyssey. She is a virtuous wife, and is faithful to her husband and protects his household (or oikos, as the Greeks would have it). Penelope rejects all the offers of marriage from her suitors because they believe that Odysseus died on his way back from the Trojan War. Penelope never gives up hope and believes that her husband is alive. She is not some meek and submissive housewife but is shown to be a strong and independent woman. This is seen in the various strategies that she uses to delay having to marry one of her 108 suitors for twenty long years. Her best known ruse was claiming that she would give her decision on who to marry after she had woven a burial shroud for the eventual funeral of her father-in-law, Laertes. Every night she would secretly unravel some of the shroud and in this way, she was able to avoid marrying one of the suitors. In many ways, she shares some of the characteristics of her husband and she was greatly admired by the Greeks and later the Romans.
Circe
Circe was a minor deity and in some myths she was the daughter of the goddess of the realm of death, Hecate. She has the characteristics of a witch; she was infamous for her potions and her staff with magical powers.  She was known to transform her enemies into monsters and beasts. Odysseus visits her, at her home on the island of Aeaea during his wanderings. The Greek heroes’ crewmates offend her, and she turns them into pigs. Odysseus manages to persuade her, with the help of Athena to turn them back and he agrees to stay with her. During his time on the island, he has two sons with her.  Circe advises Odysseus to travel to the Underworld (Hades) so that he can secure the favor of the dead spirits. Upon his return, she tells him of two equally dangerous routes home. Circe was the archetypal predatory woman to the Greeks who were sexually unrestrained and devious. Any woman that was not controlled by males was considered to be a threat to the social order in the Ancient World.
Calypso
Calypso was a nymph (minor Goddess) and when Odysseus visits her, she keeps him prisoner. For seven years he is her lover but they do not have children. Calypso is infatuated with the Greek hero and wants him to become immortal, yet Odysseus is shown by Homer as pinning for his wife Penelope.  Zeus sends Hermes to Calypso and tells her to free Odysseus as mortals cannot become immortals. Without the intervention of Zeus, the King of Ithaca would have never made it home. The story of Calypso shows the Greek belief that women were driven by their sexual desires and were irrational. This type of thinking was used to justified male oppression of females, whom it was believed needed to be controlled and dominated, because of their uncontrollable and dangerous passions.
Conclusion
In the Odyssey women were either a help or a hindrance for the Greek hero on his journey home. The women in Homer offer a fascinating account of male Greeks attitudes and views towards women. They were seen as playing an important part in the family and household. Like Penelope, they were required to be good wives or virtuous like Nausicaa. Independent and sexually liberated women, who lived beyond the control of men were seen as dangerous and this was used to justify their lowly status and general powerlessness.
References
Cohen, B. ed., 1995. The distaff side: representing the Female in Homer’s Odyssey. Oxford University Press.
Facebook

Posted in Homer, Mythology - No comments