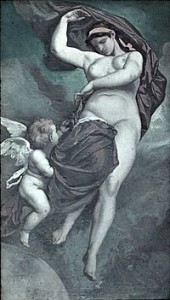 The telling of the creation of existence and the rise of the gods is a tale that has survived through the writings of Hesiod, in his epic poem The Theogony. For the ancient Greeks this was their answer to the most fundamental question of existence. And as with all Greek mythology, the story of the creation of the world is shrouded in fantasy and wonder.
It was said that in the beginning of time there was chaos. Chaos existed without form or purpose. And from chaos there came Gaia who was the earth and who created all the land. She was the primordial being of the earth and she would give birth to the heavens, who was known as Uranus. Gaia and Uranus who were the earth and the sky became husband and wife and together had many children.
The earth, Gaia, gave birth first to the mighty Titans. These creatures were immortal and possessed great strength and power. As Hesiod describes it:

“she lay with Heaven and bare deep-swirling Oceanus, Coeus and Crius and Hyperion and Iapetus, Theia and Rhea, Themis and Mnemosyne and gold-crowned Phoebe and lovely Tethys. After them was born Cronos the wily, youngest and most terrible of her children, and he hated his lusty sire.” – Hesiod, from The Theogony

Gaia then gave birth to the Cyclops, who were monstrous creatures with one bulging eye in the center of their foreheads. Then Gaia birthed the hideous….
Read more ancient myths by following the links below
———————
In the Beginning (part 1)
In the Beginning (part2)
Jason and the Quest for the Golden Fleece
Jason and the Argonauts
The Mystery of Plato’s Atlantis (part 1)
The Mystery of Plato’s Atlantis (part 2)
Daedalus and Icarus
Theseus and the Minotaur
Prometheus: The Creation of Man and the History of Enlightenment.
Narcissus: The Evil of Vanity
Aphrodite: The Original Honey Trap