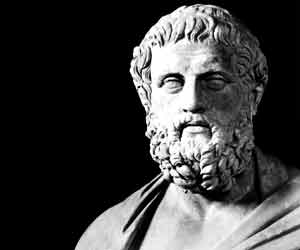 The good looking fellow himself

Some people have drama follow them wherever they go, while others just write about it. Sophocles, the prolific ancient greek playwright, was definitely the latter.  He enjoyed an ideal existence, all while changing the face of Tragedy and penning some fairly morbid ideas for future psycho-analysts, like Sigmund Freud.
Hailing from just outside Athens, Sophocles’ life was a far cry from the tragic situations that characterized his plays. He was born into a wealthy family, provided with an excellent education and received high positions and enviable accolades throughout his life.  As fortune would have it, he was around to witness the magnificent Greek triumph in the Persian War and was afterwards promoted to a high executive official, commanding the armed forces.  And, if all that wasn’t enough, he was also considered beautiful and graceful!
Nor did he die an untimely death. In fact, Sophocles did not ‘give up the ghost’ until the ripe age of 91, in the year 405 B.C. Apparently everyone knew what a lucky bloke he was, as is evident by this eulogy, found in The Muses:  “Blessed is Sophocles, who had a long life, was a man both happy and talented, and the writer of many good tragedies; and he ended his life well without suffering any misfortune.”
So what does this man know about Drama and Tragedy? How could such a fellow pen 123 plays, win 24 major competitions, and conceive of such anguished characters like Oedipus and Antigone without the help of a manic-depressive mother or an alcoholic father?
That we can not answer. All we do know is that he started off imitating the celebrated Aeschylus. Eventually, however, the student overtook the master, dominating the religious festivals and eclipsing Aeschylus’ in fame and fortune. We also can be certain that Sophocles’ works, at least those that have remained (a measly 7 of the original 100+) have, throughout history, influenced a plethora of great minds. Aristotle himself used Sophocles’ Oedipus the King in his Poetics (c. 335 BC) as an example of the highest achievement in tragedy. Not quite praise from Ceasar, but close!
But let us allow the man’s work to speak for itself. We begin by reading one of the most famous, poignant and powerful greek tragedies of all time. Classical Wisdom Weekly Readers are invited to discover “Oedipus Rex” for Free HERE: https://classicalwisdom.com/greek_books/oedipus-the-king/ ‎
Facebook

Posted in Dramatists - No comments

The comments are closed.