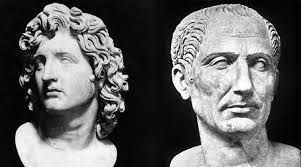 Caesar and Alexander: The Story of Two Leaders

By Giuseppe Aiello, contributing writer, Classical Wisdom
It is the year 69 before Christ. Gaius Julius Caesar, now more than thirty, is located in Cadiz, the ancient Gades of Punic origin.
Here, one step away from the famous Gates, where the Mediterranean flows into the ocean, the Roman wanders around the temple dedicated to Hercules, the mythical Greek hero that had advanced far and beyond.
Suddenly, Caesar stops in front of the statue of another half-god, Alexander the Great, who died at the age of not yet thirty-three, in June 323 BC.
Plutarch, in his “Parallel Lives“, and Suetonius in the “Lives of the Caesars” tell us the incident. To those who asked for the reason for his subdued weeping before the effigy of Macedonus, Caesar replied that he could not suffocate his pain. On the one hand, he saw how at 32, the same age as himself, Alexander had left, dying, a boundless empire that he had created. On the other hand, Caesar felt he had not yet completed a noteworthy undertaking.

The stroke of the thirty-second year for the two great Ancients, Alexander and Caesar, admirable icons of that historical era, was the end of existence for the first, and the beginning of an exceptional vital path for the second.
When the son of Philip II died, he left in the greedy hands of his successors a kingdom in which the sun rose on the Indus delta and set down diving into the Adriatic. Like hungry lions in contention with a great shred of fresh meat, Perdiccas, Antigonus, Ptolemy, Seleucus, and the other Macedonian generals, divided the immense empire of Alexander among themselves.
Death took the Great when all that could be conquered had been subdued: Greeks, Macedonians, Phoenicians, Syropalestinians, Egyptians, Armenians, Persians, Indians … Myriads of men and women of different races and lineages lived in relative serenity, in the shadow of the royal mantle of the Casa di Pella.
The Greekization of distant worlds (worlds that the Hellenic themselves called “barbarians”) found its main vehicle in the Alexandrian army. Thanks to the eternal exploits of the Macedonians, the overflow of the Hellenic language, customs and intellectual systems mixed with lands, also rich in history, spontaneously producing that epochal phenomenon that we call “Hellenism”.

Map of Alexander the Great’s Empire

It was not a forced imposition, where the people were compelled to assume the characteristics of the dominator (thus repudiating their own). Instead, it created by an extraordinary osmotic process of mutual assimilation, in which the habits, laws, and costumes of the winners and vanquished mixed together. Producing a new reality, this development gave way to the flourishing of the Hellenistic age.
When, at the age of 32, Alexander left earthly life in Babylon and entered the universal myth, he had already given a full display of his military genius. The battles of Granico (334 BC), Isso (333 BC) and Guagamela (331 BC) have exceptional importance within the history of mankind.
Thanks to them, and the success of Macedonian weapons, the great Persian King Darius III Codomannus, enemy par excellence of the Hellenic world, was yoked to Alexander’s cart. The glorious lineage of the Achaemenids was extinguished.
Alexander, the son of Olympias and the sublime student of Aristotle, had led the Macedonian phalanxes to victory counting an age between 22 and 25 years: a prodigy of precociousness.
No human being, as Alexander, has given the impression, in the course of his existence, of belonging more to the genus of the gods than to that of mortals… and so he was recognized as divine.

The crippled Caesar of Cadiz, in contrast, seemed at that moment to be fatally delayed on the road to imperishable glory. He was already a decade older than that young man who, at a little over twenty, had created a new world triumphing the bare and sandy plains of Asia. But at 32 years of age, Caesar was far from leading his legions into one of the great battles that would make his fame immortal. It wasn’t by forty years that he made the sword sing long and wide for the ecumene.
The Roman had not yet had the opportunity to show off his political and warlike genius. However, Fate and Fortuna would keep great things in store for him.
And so, where Alexander finished, Caesar began. Before the Roman, destiny possessed a further five decades of life, a period of time that he was able to fully exploit with a vigor, skill and mental lucidity that few other men have been able to show in the course of history.
The Triumvirate, the campaigns of Gallia and those against the Pompeians, the vicissitudes of Egypt alongside Cleopatra… the last decades of his star were certainly full of epochal events.

The time that Caesar enjoyed was relatively large: fifty-six years, of which the second half was vibrant and lived at large, all in an era in which the average expectation of a human being barely touched forty-five springs.
It was enough years for him to accomplish much of his purpose. It seems to us a pure dialectical exercise to hypothesize what else Caesar could have designed (and put into practice) if he had more time available, before the blades of the conspirators dramatically lowered the curtain on his life.
The works he performed were certainly extraordinary, and unworkable by any of his other contemporaries. Here is his imperishable greatness…and yet his work was profoundly human, linked to rational intentions and thoughts.
Alexander, on the other hand, reflects in himself the idea of the divine, and appears to us as a historical and temporal incarnation shaped by celestial forces. He is almost an unconscious executor of superior wills, indecipherable in the eyes of ordinary mortals. Pella’s young man dragged his earthly mission, driven by inexplicable motivation, unshakable dreams and boundless goals…all within a mere 32 years.
Facebook