Aristippus and the Pursuit of Pleasure | Classical Wisdom Weekly 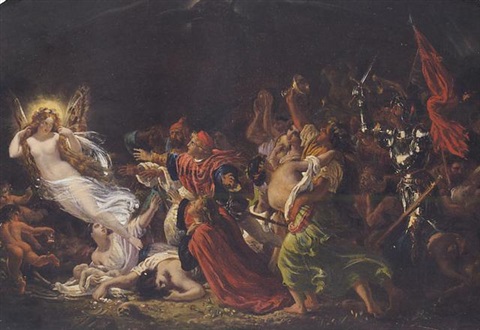 Aristippus and the Pursuit of Pleasure

As is common with many of the more obscure ancient philosophers, the majority of our knowledge comes from Diogenes Laertius’ Lives of Eminent Philosophers. As always, we may be hesitant to believe everything we read in this text. Diogenes Laertius would have have lived some 500 years after the golden age of philosophy in Greece. The lives of Eminent Philosophers is therefore more a collection of stories that were passed down, rather than a well researched biography.
Aristippus was said to have been born in Cyrene, an ancient civilization in northern Africa, in 435 BCE. As a young man, he was drawn to Athens by the fame of the not-yet-executed Socrates. Aristippus would venture to Athens sometime in his early thirties and become one of Socrates’ many followers. He regularly attended Socrates’ public lectures and would engage with the man as he attempted to live the examined life.

When it came time for Aristippus to create his own brand of philosophy, he would depart rather dramatically from the principles and the teachings of his master. As a younger man he would lecture in the marketplace of Athens and then, much like the Sophists, would accept payment for his teachings; he was the first of Socrates’ disciples to do so. It is reported that Aristippus occasionally sent money to Socrates who often returned the funds, believing it to be something of an insult.
Aristippus was said to have indulged in luxuries and extravagance and spent much of his life in the court of Dionysius I of Syracuse where he was a strange mix between a teacher and a court jester. It was said that when the King demanded it, Aristippus would willingly dress in women’s clothing and foolishly dance around for the ruler’s amusement (we will just assume that it was for no other purpose). For this reason he was described by Diogenes of Sinope as “the king’s poodle.”

Strangely, this is only one of the rather strange anecdotes surrounding the life of our hedonist philosopher. It was said that while cleaning his vegetables, Diogenes of Sinope saw Aristippus walk by and jeered at him…

“If you had learnt to make these your diet, you would not have paid court to kings”

Without hesitating, Aristippus responded by saying…

“And if you knew how to associate with men, you would not be washing vegetables!”

When King Dionysius offered to Aristippus his choice of three courtesans, the philosopher promptly picked all three and escorted them away. He rationalized this action by saying that Paris of Troy had chosen between three women once, and just look at all the trouble that started!

The judgement of Paris

It was said that while on a voyage to Corinth, Aristippus’ ship was caught up in a terrible storm. The man was seized by terror and dread. The crew reproached Aristippus by saying that the other sailors were not alarmed, yet the philosopher on board had turned coward. Aristippus responded by saying that the two types of lives that were at stake were not comparable.
It was said that Aristippus often enjoyed the company of courtesans. As a consequence, he was reproached for indulging in the company of numerous women of the night. He responded by asking if it would be objectionable to say in the palace of a king, where many men had stayed before. The observer would answer in the negative. Aristippus therefore concluded that loving a woman should be no different.

When asked what the difference was between a wise man and an unwise man, he responded by saying that you ought to strip both men amongst strangers and find out. Aristippus once encountered a fellow who boasted that he could drink a great deal and not become drunk. To this Aristippus replied, “So can a mule.”
If nothing else, we certainly have to agree that if Aristippus was not the wisest philosopher, he certainly was the wittiest. As we already mentioned, the authenticity of these anecdotes can not be verified with any certainty. It is very likely that many of these scandalous tales were more catty gossip rather than concrete fact. Still, even if only half of the stories are true, we are left with a rather…interesting philosopher.

Aristippus would, perhaps miraculously, live to see old age. He spent his life traveling the known world. He was taken prisoner by pirates, spent time in the courts of kings, and even rubbed elbows with Socrates, the father of Western philosophy. Aristippus would eventually retire to his birthplace in Cyrene where he would die at the age of 79. He left behind a philosophical legacy that, as we will see, is just as unique as its creator.

Cyrenaic Hedonism, named for Aristippus’ home of Cyrene, is first and foremost an ethical school of philosophy. What type of life we should lead? What really constitutes the “good life?” These are the questions that we attempt to answer through the application of ethical philosophy. The Greeks often believed, and this would be supported by the likes of Aristotle, that a human life is not meaningless, nor is it without purpose.

All activities have some end, some natural goal for which it strives toward. The natural end or purpose of a shipbuilder is to produce a sea vessel. Similarly, the purpose of a general is to find victory in warfare. So what can we say is the goal of a human life? For the Cyrenaics, the answer was, very simply, to find pleasure.
Aristippus and his followers believed that pleasure was universally good. Conversely, pain was undeniably, universally bad. And so, the life that is best is one that pursues pleasure while simultaneously avoiding pain.
When we say pleasure, we are not talking about the virtuous pleasures described in Aristotle’s The Nicomachean Ethics.

Before a statue of Pan
by. Nicolas Poussin

Instead, we are focused on the hedonistic pleasures of the body. Luxury, food, sex and wine are all fair game according to the Cyrenaics. Indulging then is not a selfish activity. Indulgence is a way of life, a way to the “best life” if you would like to be specific.
This departs rather dramatically from the more traditional ethical views that attempt to promote virtues such as moderation, justice and wisdom. To the Cyrenaics, these were no more than societal constructs meant to distract us from attaining that which is truly good. Indeed, it is argued that if our society was stripped down and we were no longer controlled by institutions of religion, laws, or societal expectations, then we would instinctively pursue that which is most natural and of the highest good to us. That of course, is pleasure.
It is rather important to remember that the hedonists were not attempting to say that pleasure in general is good and that we should attempt to produce as much pleasure within this world. Rather, our own pleasure is what is valuable to us. We should pursue this pleasure for no other reason than for our own happiness. This is rather crucial for our understanding of hedonism as a way of life for the individual and not as a design for universal flourishing.
The hedonists are often marginalized, disregarded and paraded as fools. For fools, however, it is rather difficult to disagree with them. When considering virtue, which many philosophers believe to be the ideal purpose of life, we are often confronted with a series of disagreements.

Through the millennia, various cultures have developed different, sometimes conflicting, understandings of virtuous actions. While we may consider it unthinkable to own slaves in our own culture, the practice was, for centuries, considered acceptable, normal, and even virtuous.
Unmarried women who became pregnant, although frowned upon by some circles, are not considered unvirtuous or evil by much of our society. However, this same practice can be considered by some to be a mortal sin.
All of this is simply to illustrate that if we intend to construct an ethical philosophy around virtue, we must first have an accepted understanding of virtue itself. This would appear to be a monumental task, one that has confounded philosophers since the birth of human thought. It is a question that, very likely, will never be answered with any degree of certainty.
Now compare this to pleasure, which does not require any complex intellectual introspection. For the individual at least, pleasure is, by its very nature, good. If we are to believe the Cyrenaics, then it is also the best good. Rather than distracting ourselves with consideration on morality, virtue, and wisdom, it is best to live a life devoted to the one good that would appear to be universally accepted.
Interestingly enough, while promoting a life in pursuit of pleasures, the Cyrenaics also espoused that we should never become slave to our desire for pleasure. An essential part of their doctrine, this aspect of hedonism is often disregarded. It was said that Aristippus once fell in love with a courtesan named Lias. When questioned about his devotion to the woman he responded by saying…

“I have Lais, not she me; and it is not abstinence from pleasures that is best, but mastery over them without ever being worsted.”

“You alone are endowed with the gift to flaunt in robes or go in rags.”

We must now leave Aristippus and his rather unique take on ethical philosophy. Considered by some to be a fool, Aristippus sought to discover the good life by pursuing pleasure and mastering his desires. There are certainly objections that could be raised about Cyrenaic Hedonism, but for now we will be content with what we have learned. It’s been a pleasure.