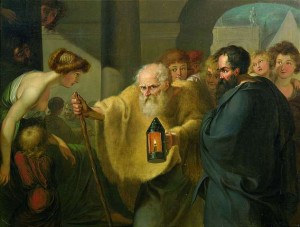 “In a rich mans house, there is no place to spit but his face”
Diogenes of Sinope is often considered one of the more eccentric, or at the very least untraditional, of the ancient Greek philosophers. He is credited as being one of the founders of cynicism and practiced these ideals through the eccentricities that filled his life.
It was his belief that all artificial growths of society, such as status and wealth, were unimportant, and could, in fact, be damaging to men’s souls. Diogenes held open contempt for abstract ideals such as reputation, property rights, or patriotism to any city-state.
He is often credited with the first use of the word “cosmopolitan” when he stated: “I am a citizen of the world (cosmopolites).”
While living in Athens, it is said that he resided in a large ceramic jar on the outskirts of the marketplace. He made a career out of begging and lying about; all while surviving on a steady diet of discarded onions. During the day, he wandered the streets with a lantern because he was “looking for an honest man”.
Diogenes was constantly dirty, disheveled, and often smelled of filth. He urinated and defecated in public, and it was not uncommon for him to literally spit in the faces of those who disagreed with him. For this reason, Diogenes was sometimes referred to as “Diogenes the dog”.
Rather than being offended, Diogenes reveled in the idea of being more like a dog. A dog, he believed, was more in touch with nature and therefore more closely in tune with true happiness. The dog does not care for social status or material possessions; the dog does not make himself a slave to the superficial desires that so plague the hearts of men. The dog lives life in the present and does not concern itself with abstract notions that might damage the soul.
Click the link to learn more about Diogenes of Sinope
-Diogenes of Sinope and the Modern Cynics
Facebook