By Jocelyn Hitchcock, Contributing Writer, Classical Wisdom
Empedocles, born c. 490 BCE in Akragas, Sicily, is perhaps one of the more eccentric pre-Socratic philosophers. He himself claimed other-worldly powers, is credited by Aristotle as the inventor of rhetoric, and is thought to have originated the cosmogonic theory of the four elements: fire, air, water, and earth. 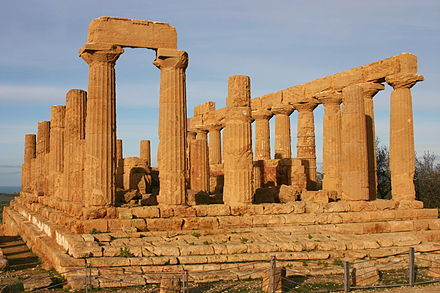 The temple of Hera at Akragas, built when Empedocles was a young man, c. 470 BC.

Empedocles’ Personal Life
While relatively little is known about Empedocles’ personal life, we do know he was born to a wealthy family who was involved in the overthrow of the Akragas tyrant in 470 BC.
Diogenes relates the ambiguity regarding exactly of whom Empedocles was a student. He offered the following options: that he was a student of Pythagoras himself, that he was a student of the Pythagorean school under the instruction of Huppasus and Brontinus, or that he could have originally been under the influence of Xenophanes and later “fell in with the Pythagoreans.” All of this confusion is due to the fact that Empedocles promoted his poetry at the start and the Pythagorean school had a law to admit no Epic poet. Indeed, he is generally considered the last Greek philosopher to have recorded his ideas in verse.

A piece of the Strasbourg Empedocles papyrus in the Bibliothèque nationale et universitaire, Strasbourg

Empedocles himself had one pupil mentioned, Gorgias, and his travels to the Peloponnese, Attica, and Thurii were mentioned by authors such as Timaeus and Dicaearchus.
Empedocles’ Philosophy
Empedocles’ philosophy and teachings are taken from the remaining fragments of his epics ‘On Nature’ and ‘Purifications.’ The core of Empedocles’ philosophy relied on the notion that all things are transformed and manipulated between the four worldly elements of fire, air, water, and earth, and that nothing is destroyed and nothing is created new. He believed that everything in the universe was made of these four root elements and was conscious. 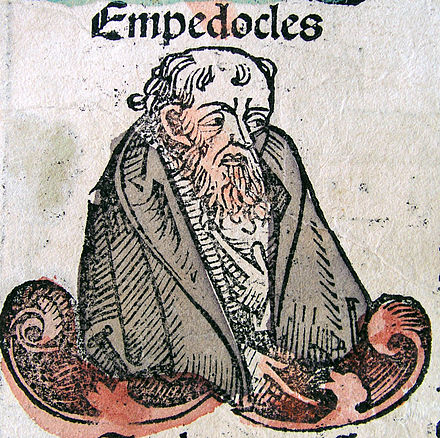 Empedocles as portrayed in the Nuremberg Chronicle

Combined with this attempt to simplify and organize the world, Empedocles’ doctrine promoted the idea that love was the unseen force holding things together, while strife was the force by which things were pulled apart. Love and Strife, then, were the ways in which the four elements were able to interact and mix together.
Empedocles’ philosophy about the universe was in response to the contemporary Eleatic School which was founded by Parmenides in southern Italy. The Eleatic School promoted the idea that “all is one” in the universe and everything existed in a single entity. Empedocles pushed back a little by saying all is composed of the same four elements. While this concept is similar at the root of the argument, it did differ enough to constitute a separate philosophical school. 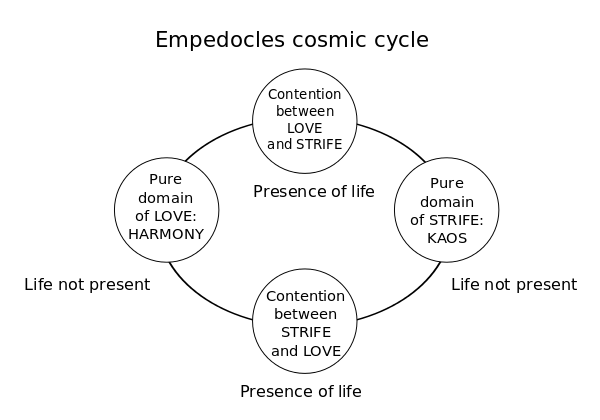 Empedocles’ Science
Even though the line between Empedocles’ philosophy and Empedocles’ science is blurred to say the least, he did undertake what we would even recognize today as “scientific testing.”
Empedocles was (unsurprisingly) not very thorough. He did, though, prove that air was not empty space by using a clepsydra, which is a water clock or any timepiece by which time is measured by the regulated flow of liquid into or out from a vessel, and where the amount is then measured. He did this by filling the clepsydra with water while covering the hole at the top. This allowed for his element of air to be an active ‘ingredient’ in comparison with earth, water, and fire – all tangible and manipulative elements. 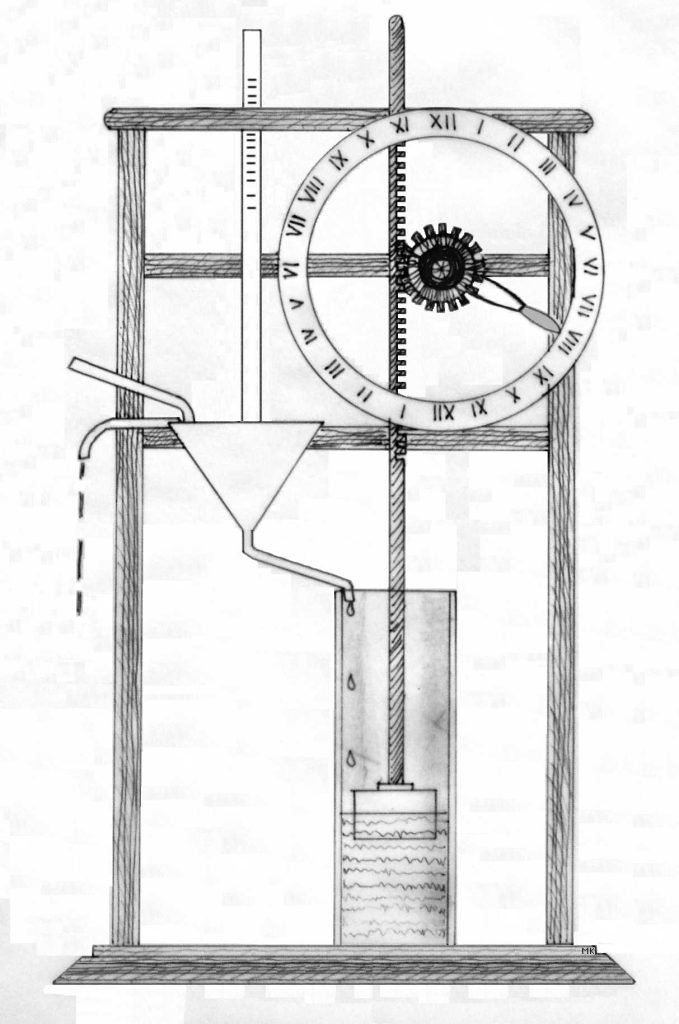 Illustration of a water clock (clepsydra)

Another theory of Empedocles comes down to us through Aristotle in De Sensu. Empedocles thought that the light from the sun passed through intermediary space before being processed by our eyes, moving through space by whatever force. Indeed, Empedocles is credited with the first comprehensive theory of light and vision.
But perhaps one of the more advanced undertakings of Empedocles gives us what is thought to be the earliest extant attempt to discern the origin of species. He introduces zoogony, or generations of animals, in his attempts to explain the origin and development of biological life as a coming together and unfolding of birth. He uses examples of wild animals, humans, and plants as his proofs. This theory is strongly in line with his overarching philosophy of things in strife and things in love. Indeed, we see what Empedocles thought was the practical application of such rules. 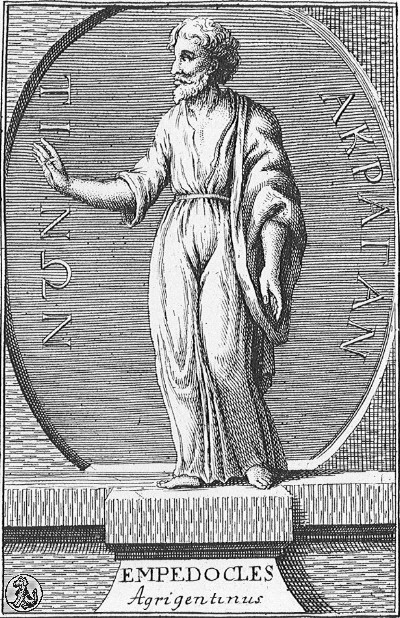 Empedocles (of Acagras in Sicily) was a philosopher and poet: one of the most important of the philosophers working before Socrates (the Presocratics)

Empedocles’ Death and Legacy
Empedocles’ death is the stuff of legends, as he was mythologized by ancient writers. One story of which is where he died by throwing himself into Mount Etna, allowing him to turn into an immortal god. Another includes Empedocles being removed from the earth and his exact age at death is disputed anywhere between age 60 and age 109. 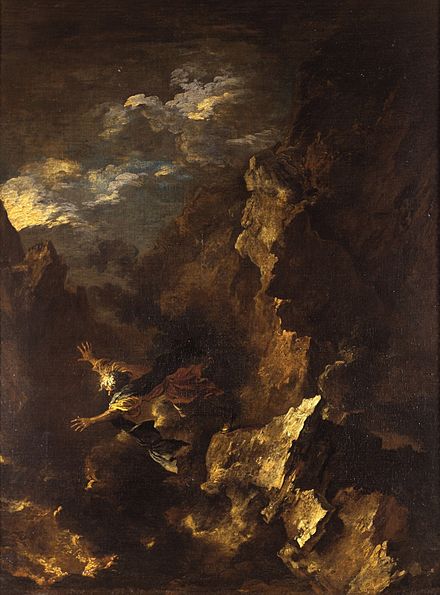 The Death of Empedocles by Salvator Rosa (1615 – 1673), depicting the legendary alleged suicide of Empedocles jumping into Mount Etna in Sicily

Further descriptions of Empedocles and his ideas are recorded by Aristotle, Diogenes, Pliny, and Horace’s Ars Poetica. Aristotle called him the father of rhetoric and Lucretius speaks of him with enthusiasm, and evidently viewed him as his model. Much later his death is at the center of a 1826 play by Friedrich Holderlin, ‘Tod des Empedokles,’ and Matthew Arnold’s 1852 poem titled ‘Empedocles on Etna.’ While this eccentric philosopher may not be a household name today, he was clearly very influential in the ancient world and thus deserves our attention.
Facebook