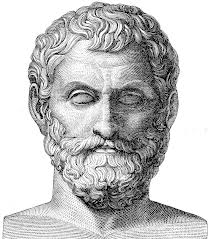 “Hope is the only good that is common to all men; those who have nothing else possess hope still”
Thales of Miletus is often credited with being the first of the Greek philosophers. He was born around 624 BCE and lived on the Greek peninsula of Miletus. Little is known about his life. His writings, if they ever existed, have been lost to the ages. We know that he was regarded by his fellow Greeks as being incredibly wise, but also as a man who had ‘his head in the clouds’.
Many Greeks assumed that the philosophy of Thales, or any philosophy, was not pertinent to day to day life. Thales proved these assertions wrong when he used his powers of observations to find success in business. By examining weather patterns, he managed to predict a bountiful yield of olives one harvest year. Thales purchased a majority of olive presses early in the season. He then sold or rented the presses to farmers during harvest time at a considerable mark up.
Thales, like many early philosophers, sought to explain the nature of the universe. He believed that all the world was composed of one fundamental substance. This first substance, to Thales, was water. He believed that all matter, regardless of how it may appear, was actually composed of water in one form or the other.
This belief may seem strange to us. However, for his time, it was incredibly insightful. Thales was one of the first individuals to examine the world through a lens of scientific observation. He knew that water was capable of change, that it supported all life, and that it was essential for sea travel between the many city-states of Greece.
He is remembered for his belief in finding truth through empirical observations. He would ignite a philosophical revolution that would come to define the culture of Greece and blaze a trail for future scientific progress. As it is often said, ‘Western philosophy begins with Thales’.
Click the link to read more about Thales of Miletus
-Thales of Miletus and the birth of Western Philosophy
Facebook