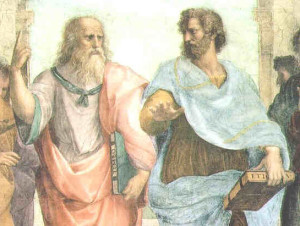 One might wonder why Socrates never wrote anything down. Such a brilliant philosopher… wouldn’t he want to impart his wisdom to future generations? Surely he would aspire to inspire others who weren’t necessarily within ear shot? But no. He didn’t author a single word. He wanted people to think for themselves, rather than just mimic his ideas. For Socrates it was all about the method. It was about being able to arrive at one’s own ideas independently.
Plato, however, did write, and he recorded both his and Socrates’ thoughts. He didn’t forget his teacher’s lesson though, and so often composed dialogues that demonstrate the critical process of thinking and questioning, rather than present a definitive, conclusive answer. In this way, Plato encourages us to keep thinking.
As a child, Plato probably would not have envisioned the life he was going to lead. His family’s lot, steeped in aristocracy and influence, was of the political class. His father Ariston supposedly could trace his ancestry to the King of Athens and the King of Messenia. Not to be outshone by her husband, Plato’s mother, Perictione, rubbed shoulders with the likes of Solon, a famous lawyer and lyric poet. In addition, her brother and uncle we part of the thirty tyrants that ruled over Athens after the deafening defeat at the hands of Sparta. Plato was very proud of his distinguished family tree, and often glowingly referred to them in his dialogues.
Considering his family’s affluence and prestige, it is not surprising that Plato received the best education, instructed by the most distinguished teachers at the time. His most influential mentor, of course, was Socrates himself. He met him when he was but a youth. Socrates was considered an ugly man who did not possess much wealth or prominence. He might have been seen as a strange intellectual bedfellow for the well-to-do Plato. However, the old man had a remarkable power of discourse and an ability to bring down the most grandiose of gentlemen. 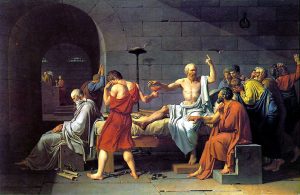 The Death of Socrates

Socrates was Plato’s mentor and became his protagonist. His execution in 399 would have certainly affected the budding boy and shake his confidence in a political system that allowed such a tragedy. The fall of Athens at the end of the Peloponnesian war also would have been a momentous episode in Plato’s life. As well as the ensuing dictatorship which failed miserably due to the inevitable corruption of the 30 chosen oligarchs. It’s no wonder then the quick thinking Plato abandoned the family trade and choose philosopher over politics. It was Socrates, the probing philosopher, who changed Plato’s course to the world of debate, dialogues and discovery. 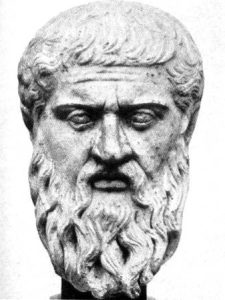 His career, once selected, was very successful. He wrote, traveled, set up an academy dedicated to thinking and questioning. He even tried to shape a dictator in Syracuse to become one of the Philosopher kings. Unfortunately, it didn’t work. And then, as all mortal men do, he died, at the ripe old age of 80. Recognised at the brilliant man he was, forever imparting not only wisdom, but a way of trying to understand the world.
We’ll never know exactly where Socrates ended and Plato began. What ideas, ultimately, belonged to the teacher or to the student? All we can know and be grateful for, is that Plato had the audacity to write them down, so that even now we can continue to question.
Check in in next week for a look at Plato’s Apology. You can view the whole text here beforehand for free: https://classicalwisdom.com/greek_books/apology-by-plato/
Facebook