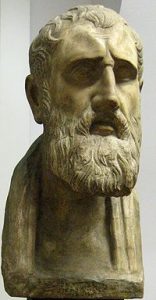 “Happiness is a good flow of life”

Zeno of Citium was born around 332 BCE, some 10 years after the death of Aristotle. A quiet man who had no desire for dramatic lectures or elaborate festivities, he would become known as the father of Stoicism and lay the foundations for later stoics, including the Roman emperor Marcus Aurelius.

It has been told that while visiting Athens as a young man, Zeno of Citium became acquainted with the cynic Crates of Thebes, a man who is believed to have been a disciple of Diogenes of Sinope. It was said that Zeno was taken with the philosophy of the cynics and would later use several of their tenets when developing his own philosophy of Stoicism.
While Zeno admired the cynics, he was too modest to ever fully indulge in their lifestyle of anti-establishment behavior. Diogenes of Sinope may have thought it okay to urinate and defecate in public, sticking it to the man thousands of years before the hippie revolution. However Zeno was easily embarrassed, and reportedly once ran away in shame after his teacher purposefully poured soup on him.
While Zeno may never have been the cynic that Diogenes was, he certainly shared his no nonsense approach to life. Zeno held little interest in abstract metaphysical thought. And while he studied numerous topics as a philosopher, he would be most well remembered for his work on ethics.
Ethics very simply is the study of what makes something good or bad. We all pretend to understand the concepts of “good” and “bad”, but ethical philosophers look to explain why something was good or why something was bad. Essentially, ethical philosophers set out to try and explain what is the best way to live our lives. Stoicism, therefore, is not fun food for thought. It is a way of life.
Stoicism teaches that the universe is predetermined, sculpted by a supreme lawgiver. We, as humans, can do nothing to change this fact. The only thing we are capable of doing is controlling our own goals and our own thoughts. And this is where the key of stoicism can be found, controlling our own thoughts.
Stoics believe that it is unwise to pursue a life filled with superficial pleasures and lavish desires. We poison ourselves by continuously desiring more and more pleasurable things. And we attempt to find these things at the expense of our own peace. The stoics teach that it is in our power to change this way of thinking. By removing these desires for superficial treasures we can become one with the world around us, a world that is crafted by reason and flows serenely through all of time.
Click the link to read more about Zeno of Citium
-Zeno of Citium and the rise of Stoicism
Facebook