Homer and the Soul

There is no ‘soul’ in Homer.
The Ancient Greek ψυχή  is usually translated as ‘soul’. The Ancient Greeks, however, never asked the question, ‘does the ψυχή exist?’ And when you really think about it, we don’t have such a question nowadays either.  It amounts to asking ‘does life exist?’ not ‘does the soul exist?’ To be sure, the definition of life is not a settled thing. The legal and ideological struggles over the moment of its inception and demise, at least in human beings, have been impactful and controversial. All the same, there is no question that the difference between a corpse and a living being is ‘life’. Similarly with Homer, the presence or absence of the ψυχή meant the difference between the living and the dead. 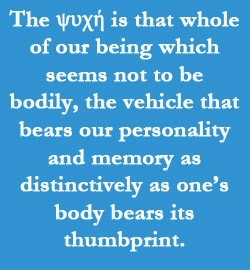 Plato, and other later Greek authors, made a conceptual leap. (Though I should clarify that there was no progression between Homer and the Greek-speaking people who claimed him.  In fact there is an unbridgeable gulf because there is no history of Homer himself, and no account of how he came into their ears or hands.) In Plato there was a notion above and beyond mere life. It was an integral and integrated consciousness in human experience that was referred to by the same term, the life-bringing force, the ψυχή. The ψυχή is that whole of our being which seems not to be bodily, the vehicle that bears our personality and memory as distinctively as one’s body bears its thumbprint.

This post-Homeric conceptual leap—or slide, or plummet— shifted the question ‘is there a soul?’ from the biological to the quasi-religious status it has today. The idea that the human soul was required to do more than to keep us alive did not seem to be a problem for Plato, as perhaps, it is for us. After all, something is doing more than keep us breathing.

Let’s go back to Homer. Consider lines 3 and 4 of the Iliad I. ‘Hurling down to the House of Death so many sturdy souls,/great fighters’ souls, but made their bodies carrion,/feasts for the dogs and birds … ’. (You can hear a live version of this section recited in Ancient Greek Here.) This is from the Fagles version. Translations often use the word ‘bodies,’ but this is highly misleading. In English, the word ‘body’  connotes an opposition to both ‘soul’ and ‘mind’. There was no such opposition intended in this passage, however. Homer knew how to say ‘bodies’ if that is what he meant. In this case, his word αὐτούς is a pronoun that is sometimes personal and sometimes intensive. Here it is both. Think about the implications of the following translation: ‘many and mighty were the souls [his anger] hurled into Hades, souls of heroes, but they themselves it made a spoil for jackals.’ The distinction is between heroes’ souls, and the heroes themselves. The latter stayed on the battlefield.

Clearly the ψυχή in Homer is not the Platonic soul. It is not even really the animating principle. In Homer that seems to be the ϑυμός, also translated as ‘soul’ in the sense of the ‘hot breath’ that leaves a warrior’s lungs upon his death. It dissipates. If he recovers, as did Hector in Book XV, after he has been struck by Ajax while Zeus was distracted in bed with Hera, his ϑυμός was ‘regathered’. I think this meant, literally, in the lungs; he could breathe again. 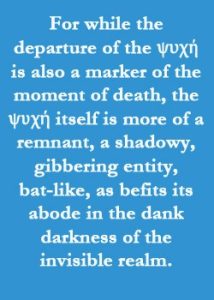 In Homer, the ϑυμός is also the repository of consciousness. It is the place where emotions are felt. It can be objectified, however, outside the personality. Odysseus was famous for chiding his ϑυμός, encouraging it to ‘bear up’. This illustrates an interesting difference between ϑυμός and  ψυχή.  For while the departure of the ψυχή is also a marker of the moment of death, the ψυχή itself is more of a remnant, a shadowy, gibbering entity, bat-like, as befits its abode in the dank darkness of the invisible realm. Typically it bewails the loss of true life and youth: the human himself that is left behind.

Then there is the word φρένες, which often seems to refer to the lungs and hence to the ‘vessel’ of the ϑυμός. It was thought of as the seat of understanding and particularly of moral insight.  When Achilles discussed with Agamemnon the burial of Patroclus, he spoke of preparing everything necessary for a corpse’s journey into the murky gloom. Later in the night, he was visited by Patroclus’ restless spirit (ψυχή). Achilles exclaimed in the aftermath of this encounter, that there ‘is after all a something in the halls of Hades, a soul and image, although the φρένες are not at all within it’ (XXIII.103-4). Later, during the funeral procession, Homer had Achilles holding on to the head of Patroclus; ‘for it was his blameless comrade that he was sending [or escorting] to Hades.’ Therefore it was neither the corpse, nor the ψυχή, that was journeying to Hades. This time it was his comrade (ἕταρον).

But what of the ‘soul’ after death? Achilles, in the wake of Patroclus’ death, has a revelation of an afterlife, or more properly, a remnant of life. The scene then changes and it is as though the young Achilles becomes aware of his audience, and speaks directly for the poet. It is precisely at this moment that Homer allows himself to experience with us the mystery and even the doubtfulness of this possibility: that there is after all something there after death, in an invisible realm; whether or not it is only a wasted spirit, or a ghostly image.