The Most Moral of them All

Who is the Moral maker? Who writes the tales of what is good or bad? Which wise words, written before Christ, still resonate with our modern times? Surely they were from a Philosopher or a great King? How about a worldly scholar or a famed adventurer? No, the most prevalent of Ancient Greek ethics originated from a slave.
You know the stories. A boy calling wolf. A lion with a thorn. A fast and cocky hare competing with a crawling, but dedicated tortoise. “Slow and steady wins the race” is the distilled lesson taught to impressionable school children. However, most young students do not learn the amazing history of the one behind those clever tales, if anyone was behind them at all.
These anecdotes, filled with animated animals and shrewd lessons, are attributed to Aesop – or Isope – or Esop(e), depending on which spelling you prefer. This man, if he did exist, not only inspired over 600 parables, but also had an inspiring life himself. So much so, that the Ancients romanticised his biography, making the man into a myth. A dwarfish slave who, with his clever tongue, became a free man and then an emissary for the king, all while telling amazing myths himself. 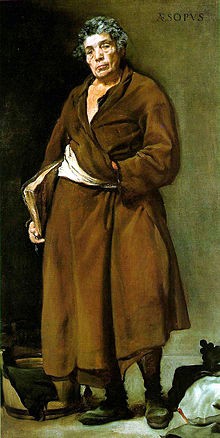 Aesop as envisioned by Velázquez

According to Aristotle, one of the earliest Greek authors to write about Aesop, the Fable teller hailed from Thrace around 620 BC, in modern day Bulgaria. However, even this is a point of conjecture. Three other writers from Ancient Greece and Rome say he originated from modern day Turkey, in either Phrygia, Sardis, or Lydia. Some historians even believe that he was from Africa. With a name like Aesop, surely he was ‘Aethiopian’ or Ethiopian! Other experts rebut that, saying it is etymologically incorrect. The inclusion of African animals, such as camels, elephants, and apes, suggest he was from Egypt or Libya… or that these stories were added later on. And then there is the point that Bill Cosby played Aesop in the 1971 TV production Aesop’s Fables.
Whether Aesop was from Ethiopia or Sardis, he apparently was born a slave and a really, really ugly one at that. He was described as having multiple deformities, including a debilitating speech defect. According to Aristotle and Herodotus, he worked in Samos and his first master was a man named Xanthus. His next master, Ladmon, eventually freed him when he argued on behalf of a wealthy Samian.
It has been said that Aesop had a penchant for trouble, including irreverence and tomfoolery, but used his gift of discourse and turn of phrase to escape punishment. He also supported those in power or confronted them, pointing out their hypocrisy and using fables to make his point. But there are also many legends on Aesop, such as dining with the Seven sages of Greece, sitting aside the famous Athenian statesman Solon, which have been discredited, due to a misalignment of historical dates.
And then there was the extremely popular The Aesop Romance, an anonymously authored book written in the 1st or 2nd century AD. It began with a vivid description of Aesop’s appearance, saying he was “of loathsome aspect… potbellied, misshapen of head, snub-nosed, swarthy, dwarfish, bandy-legged, short-armed, squint-eyed, liver-lipped—a portentous monstrosity.”
In this fantastic version he was born mute in Samos, and then divinely gifted not only with the ability to speak, but to weave wonderful wisdoms. He was able to confound his Philosopher master in front of his students as well as sleep with his wife. However, this version was highly fictional and illustrates how the ancients were fascinated by the legends of Aesop’s life, hundreds of years after his supposed existence.
Plutarch then told the story of his sad and untimely end. The freed and respected ex-slave was sent to Delphi, Greece on a diplomatic mission from King Croesus of Lydia. According to the narrative, Aesop insulted the Delphians, maybe with an unpopular fable. He was then sentenced to death on a trumped-up charge of temple theft, and then either thrown or forced to jump from a cliff. After which the Delphians suffered pestilence and famine as retribution, or at least as they saw it.
But maybe none of this actually happened. The fact of the matter is that there are no surviving texts written by Aesop. Ancient greek writers like Herodotus and Aristophanes mention ‘reading’ Aesop, suggesting that there was a book existing at some point, but can we be sure? Maybe Aesop just became the symbol for what is unauthored. The collection of morality that can not be assigned to one man. The Fable of the fable creator.
You can read Aesop’s Fables Here.
Facebook