Count no man happy until the end is known

Why aren’t we happy?
It’s a question that we have undoubtedly asked ourselves at one point or another. Perhaps you have done it while staring up at the ceiling fan late at night, or perhaps while doodling on a cocktail napkin at some out-of-the-way dive bar.
The prevailing notion in the modern Western world is that happiness is a subjective feeling we experience from day to day. Like the stock market, happiness goes up, then down, and nobody really knows where it will land next. We view happiness as something that can be augmented by a pill or a bottle or a romp around in the hay.
But if after sobering up, and shaking all the hay out of your hair, you’re still feeling blue; there might be a reason for that. Today we consider the nature of happiness, and how we, as a culture, might be getting it all wrong.
As always, I’m a firm advocate that an understanding and appreciation for the history and ideas from the classical age (the foundations of much of our intellectual traditions) can provide some much-needed insight. The classics, in this sense, are like spectacles placed upon a perpetually near-sighted man for the first time.
Hallelujah! I can see!
So, where to start?
So Solon walks into a palace…
As Herodotus tells it (in Book I of his The Histories) the Athenian lawgiver, Solon traveled to the ancient kingdom of Lydia and visited with the ruling king, Croesus of Sardis. The king was delighted to have such a renowned philosopher and statesman in his presence.
N.B. Solon is remembered as a lawmaker from the Archaic age of Athens. His laws are often credited with laying the foundation for early Athenian democracy about a century later.
For several days, the king instructed his servants to tour Solon around his palace to demonstrate his enormous power and wealth. Once he felt that his riches had adequately awed Solon, the king asks the Athenain:
Stranger of Athens, we have heard much of thy wisdom and of thy travels through many lands, from love of knowledge and a wish to see the world. I am curious therefore to inquire of thee, whom, of all the men that thou hast seen, thou deemest the most happy?
Croesus already assumes himself to be the happiest man in the world, but wishes to hear his name parroted back to him by such a renowned sage. Rather than name the king as the happiest man, Solon claims that Tellus of Athens is the happiest of all men. 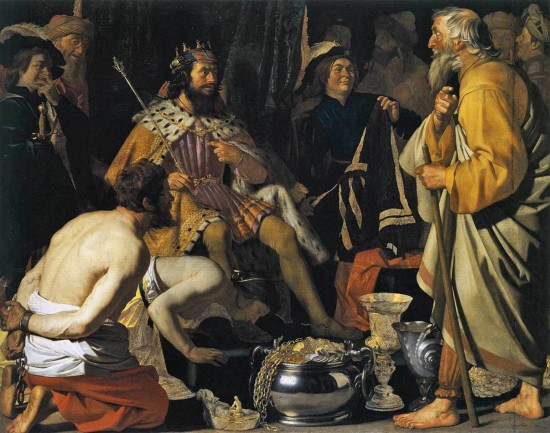 Solon and Croesus, by Gerard van Honthorst
Croesus is shocked, what makes this Tellus guy so special? Why is he the happiest?
Solon replies…
Croesus was perplexed by such an answer, but he pushes on regardless. If he weren’t THE happiest man, certainly Solon would name him the second happiest, right?
Nope…
Solon says that the second happiest of mortals were a pair of strapping young Argives, Cleobis and Bito. These lads were renowed for their strength and athleticism. One day, their mother wished to travel to the temple of Hera to attend a festival, but there were no oxen to pull the cart. The two brothers, who clearly loved their dear old mom, slung the yoke over their own necks and dragged the cart six miles.
They were, in essence, the ideal “good sons” who drove their mother to church on Sundays.
When the brother arrived at the temple, the other citizens witnessed their feat and extolled the boys for their strength and dedication. Later, the mother prayed to the goddess to grant her sons the greatest of gifts a mortal could receive. After the festival, the youths fell asleep in the temple and never awoke. They passed from this earth and were forever remembered by their people as the best of men.
At this point, Croesus is livid with Solon. These dead men are happier than he, a king? Surely, the old codger must have lost his marbles.
Solon explains that while Croesus is very wealthy, the wealthy have only two advantages over the poor- “the means to bear calamity and satisfy their appetites”. However, the rich have no monopoly on the things that the classical Greeks thought constituted a good life: civic
“Plus, riches do tend to create more issues for their possessors. After all, mo money mo problems.”
service, raising a healthy family, being of sound mind and body, and honoring the gods. Plus, riches do tend to create more issues for their possessors. After all, mo money mo problems.
The wealthy can be said to be “fortunate”, but “happiness” must be reserved for those of us who have already shuffled off this mortal coil. How do we meet our end? Does our good fortune last until our dying breaths?
Solon concludes that he cannot tell Croesus if he is happy or not until he knows the manner of his death. Count no man happy until the end is known.
Croesus sends Solon away with much indifference, but he might have done well to listen to him. Soon after, the king’s son is killed in a hunting accident and the king himself is struck blind by the gods for his hubris. Finally, after an ill-advised invasion of the Persian Empire, Cyrus the Great of Persia crushes Croesus’ kingdom, and Croesus finds himself on the business end of a funeral pyre while he is still breathing.
As the flames licked at his feet, Croesus cries out…
Count no man happy until the end is known
So what to make of all this?
Is it true that a fulfilled life can only be measured once everything is said and done? Many of the classical thinkers certainly thought so. Solon was not arguing that men like Tellus and Biton were happier in death than in life. He was not referring to the great hereafter.
Solon was arguing that a full accounting of happiness can only be known once the life of a citizen is laid out start to finish. Only then can we see if somebody has achieved virtue, self-sufficiency, and all other good things that the ancients believed to be paramount to a “good life”.
So what do you think, dear reader? Can we only be counted happy once the end is known? Or is this a lesson from the ancient world that we might do well to forget?
Facebook