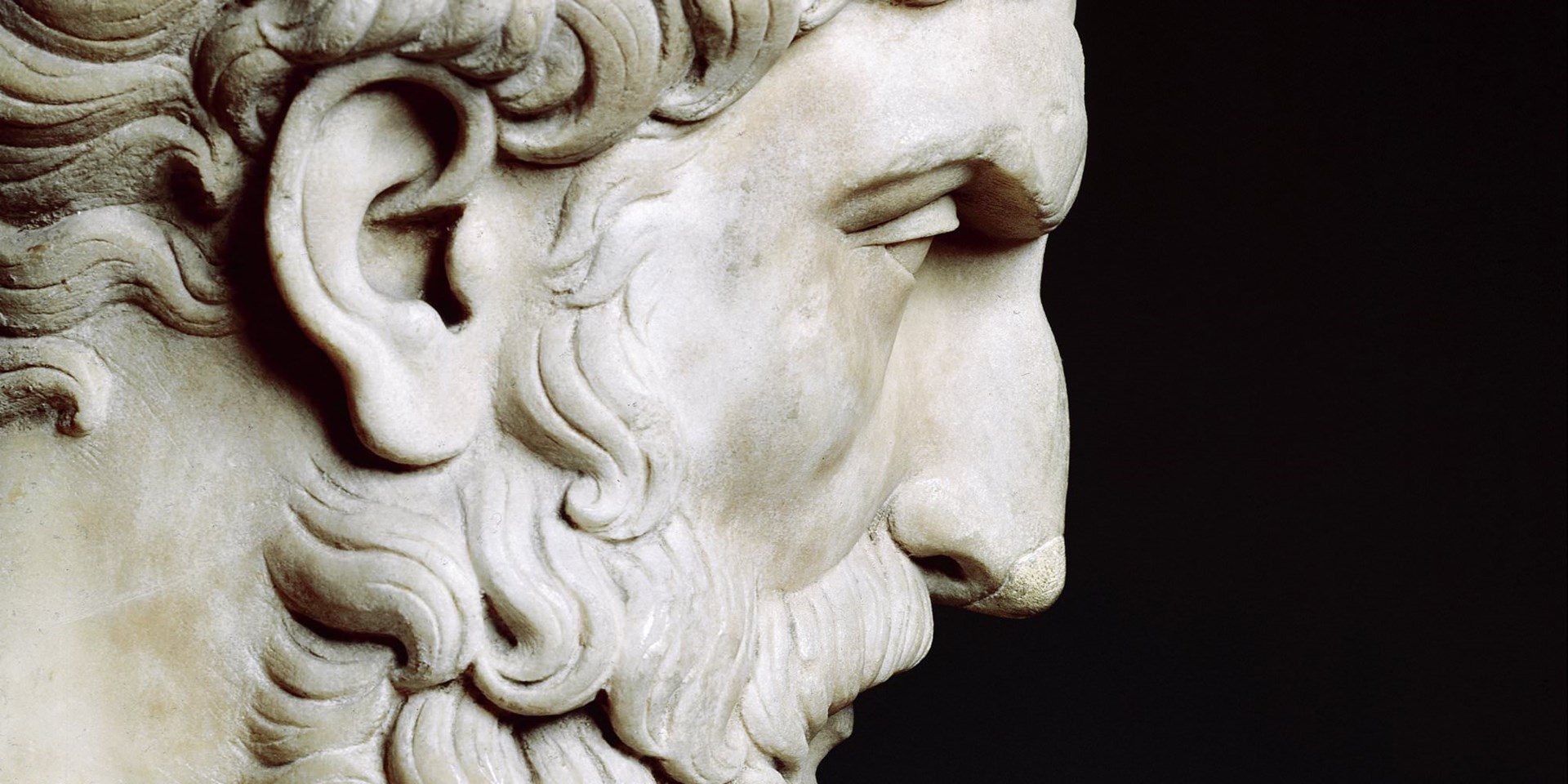 Epicureanism: Death Does Not Concern Us

“It is impossible to live a pleasant life without living wisely and well and justly.

And it is impossible to live wisely and well and justly without living a pleasant life.”

The philosophy of the hedonists, as discussed last week, seems appealing, so long as we don’t examine it too closely. Still, that does not mean that we must disregard all of hedonism. Certainly, a life of pleasure is not the worst thing we could think of when asking “how should I live?” Perhaps if we could amend the philosophy so that it more accurately reflects the capabilities and limitations of human life, then we might find a workable moral philosophy.
Epicureanism attempts to do just that. Named for the philosopher Epicurus of Samos, Epicureanism grew in popularity as an ethical philosophy after the death of Aristotle during the Hellenistic age of Greece. It is often unfairly lumped in with the teachings of Aristippus and the Cyrenaics. While Epicurus did promote life in pursuit of pleasure, there was a rather crucial difference between the Epicureans and the Cyrenaics. 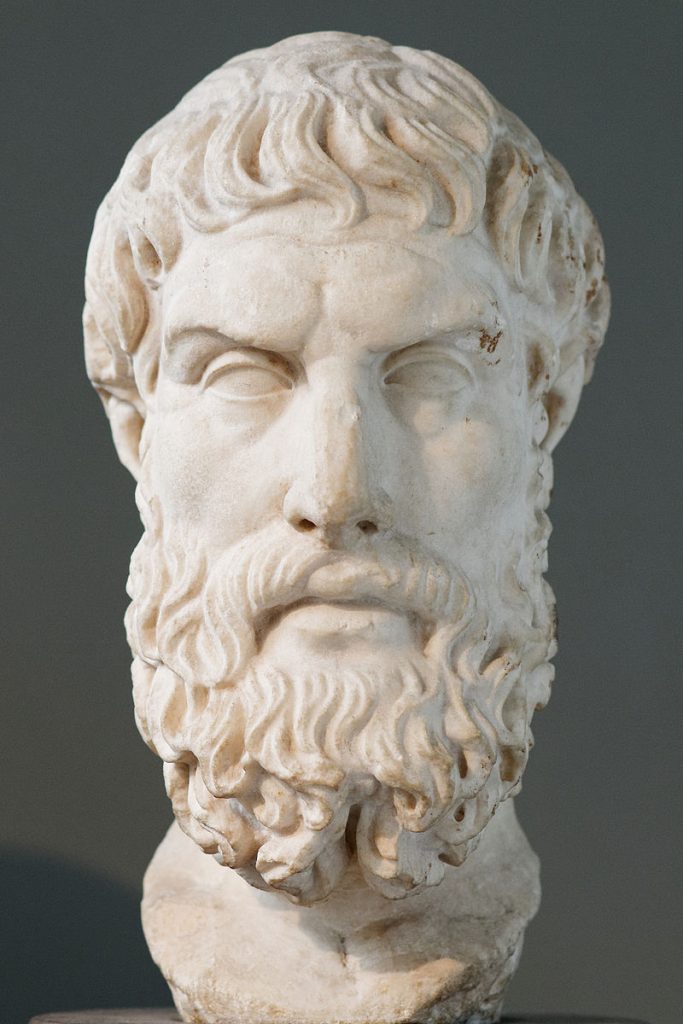 Portrait of Epicurus, founder of the Epicurean school. Roman copy after a lost Hellenistic original.

While Aristippus tells us that the best life is one in pursuit of pleasures, often to excess, Epicurus’ philosophy tends to be more realistic. Rather than indulging in an excess of pleasure, Epicurus teaches us to find contentment and tranquility by avoiding pain and fear while seeking out modest pleasures. Rather than going to the bar and drinking half a dozen beers, we ought to enjoy two glasses of fine wine over dinner. Instead of consuming a dozen doughnuts in one sitting, we ought to take pleasure in a simple, suitably sized meal.

So when we say that pleasure is the goal we do not mean the pleasures of the profligate or the pleasures of consumption… but rather the lack of pain in the body and disturbance in the soul. For it is not drinking bouts and continuous partying and enjoying boys and women, or consuming fish and other dainties of an extravagant table, which produce the pleasant life, but sober calculation which searches out the reasons for every choice and avoidance and drives out the opinions which are the source of the greatest turmoil for men’s souls. ~ Epicurus, Letter to Menoeceus

An old philosophy professor once told me that if Cyrenaic hedonism were a genre of music, it would be heavy metal. Epicureanism, on the other hand, would be classical piano or slow jazz.
That comparison is rather apt. Both philosophies propose a life in pursuit of pleasure. The difference being that strict hedonism often encourages excess, while Epicureanism consciously avoids it. It can be said that the final end of a life devoted to Epicureanism is a sense of tranquility, peacefulness, and contentment from the occasional enjoyment of simple pleasures—both of the body and the mind.

I recommend constant activity in the study of nature; and with this sort of activity more than any other I bring calm to my life. ~ Epicurus, Letter to Herodotus 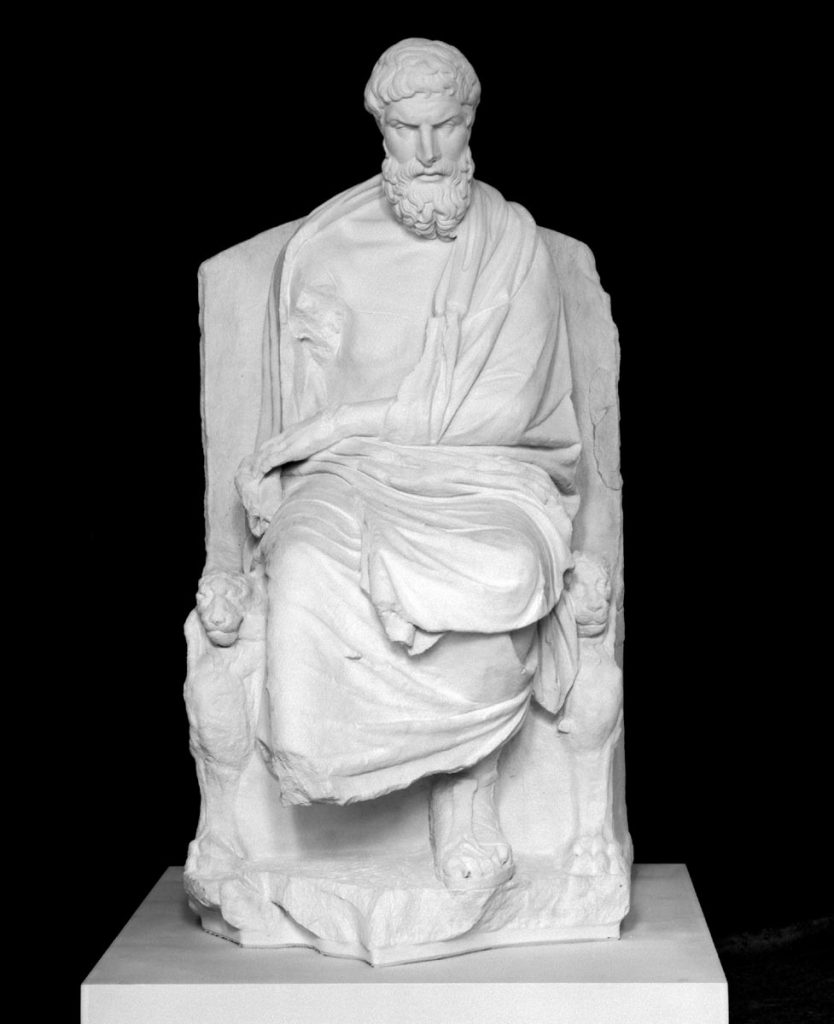 An interesting aspect of Epicurus’ philosophy is his view on death and the impact it ought to have on life. Epicurus subscribed to the atomist’s theory of the soul. This simply means that Epicurus believed that the soul was a physical part of the body. Upon our deaths, the soul simply fades into nonexistence, into nothingness.
This would imply that the soul does not move on to another realm of existence (heaven or hell). Death marks an end of being, a cessation of any sensory or emotional stimulation. Upon our death, we feel no pain or fear. In fact, we feel nothing at all, because our consciousness has ceased to exist.

So death, the most frightening of bad things, is nothing to us; since when we exist, death is not yet present, and when death is present, then we do not exist. ~ Epicurus, Letter to Menoeceus

Epicurus believed that the majority of human suffering was caused by our irrational fear of death. This fear often prevents us from enjoying our lives; it denies us our tranquility and calm. If we could accept that death is neither frightening nor painful, but simply the natural conclusion to life, then we would live a fuller, more enjoyable existence. 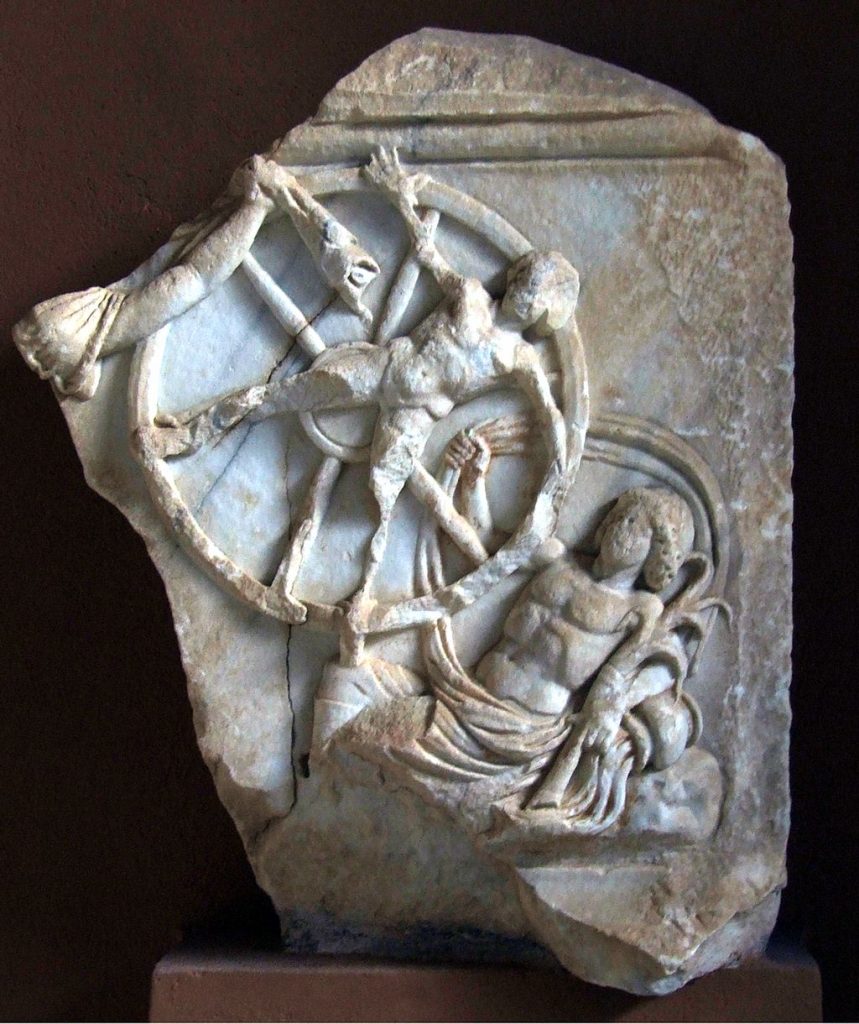 Marble relief from the first or second century showing the mythical transgressor Ixion being tortured on a spinning fiery wheel in Tartarus. Epicurus taught that stories of such punishment in the afterlife are ridiculous superstitions and that believing in them prevents people from attaining ataraxia.

Objections to Epicureanism:
Epicurus certainly faced criticism during his own life. His insistence that the human soul is nothing more than a collection of atoms, and that sense-perception ends with death, caused others to believe that Epicurus was an atheist—a rather serious accusation during the times of Hellenistic Greece. Epicureanism as a philosophy suffered due to Epicurus’ reputation as a blasphemer.

Therefore, so long as the soul remains in the body, even though some other part of the body be lost, it will never lose sensation… On the other hand the rest of the structure, though it continues to exist either as a whole or in part, does not retain sensation, if it has once lost that sum of atoms, however small it be, which together goes to produce the nature of the soul. Moreover, if the whole structure is dissolved, the soul is dispersed and no longer has the same powers nor performs its movements, so that it does not possess sensation either. ~ Epicurus, Letter to Herodotus
So, when shall be no more – when the union of body and spirit that engenders us has been disrupted – to us, who shall then be nothing, nothing by any hazard will happen any more at all. Nothing will have power to stir our senses, not though earth be fused with sea and sea with sky. ~ Lucretius, De Rerum Natura

Epicurus’s philosophy leaves little, if any, room for divinity or faith. The universe consists of only atoms and empty space. If there is a God, then he has no sway over our lives. We are the sole authors of our story.

First of all believe that god is a being immortal and blessed, even as the common idea of a god is engraved on men’s minds, and do not assign to him anything alien to his immortality or ill-suited to his blessedness: but believe about him everything that can uphold his blessedness and immortality. For gods there are, since the knowledge of them is by clear vision. But they are not such as the many believe them to be: for indeed they do not consistently represent them as they believe them to be. And the impious man is not he who denies the gods of the many, but he who attaches to the gods the beliefs of the many. For the statements of the many about the gods are not conceptions derived from sensation, but false suppositions, according to which the greatest misfortunes befall the wicked and the greatest blessings the good by the gift of the gods. For men being accustomed always to their own virtues welcome those like themselves, but regard all that is not of their nature as alien. ~ Epicurus, Letter to Menoeceus

In order to live happily, according to Epicurus, we must purge ourselves of pain and fear. We can only do this by accepting that death is of no real significance. However, the argument for the unimportance of death calls for a rejection of divinity and, by extension, God. 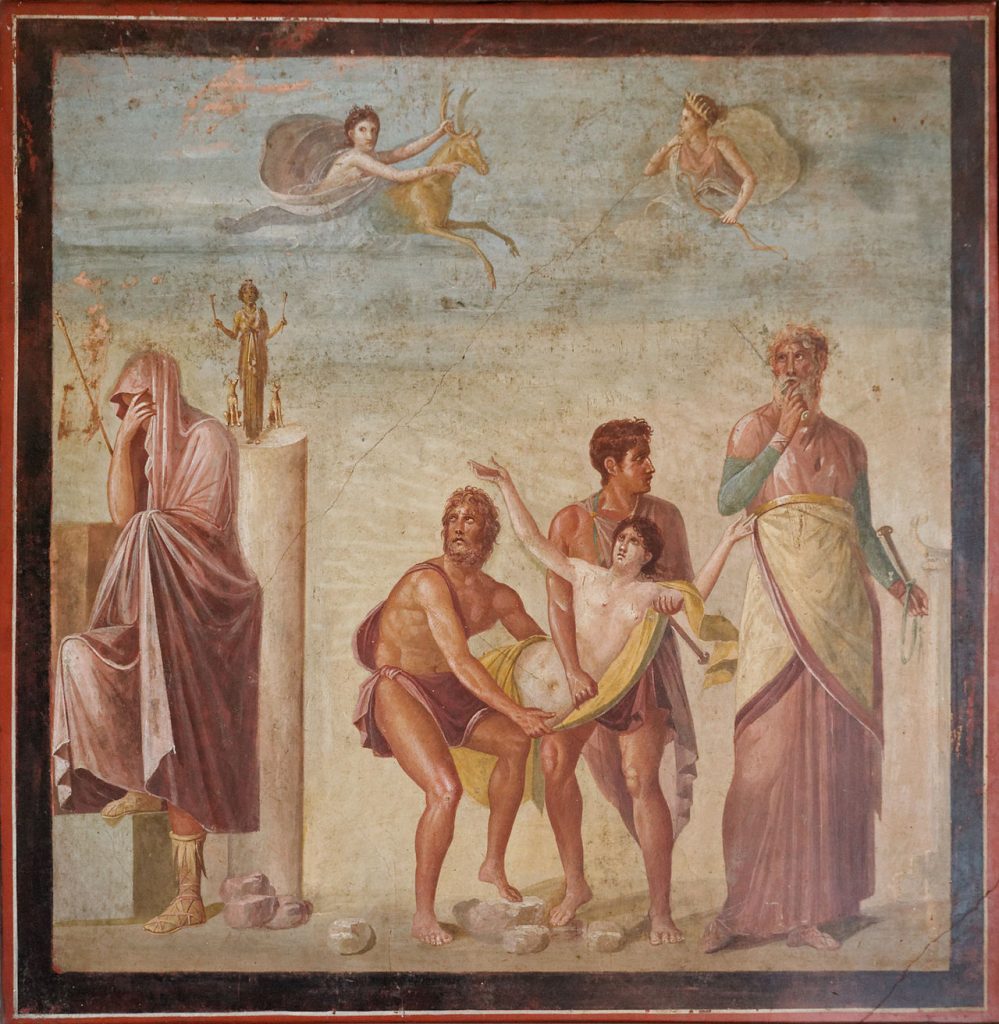 First-century AD Roman fresco from Pompeii, showing the mythical human sacrifice of Iphigenia, daughter of Agamemnon. Epicurus’s devoted follower, the Roman poet Lucretius, cited this myth as an example of the evils of popular religion, in contrast to the more wholesome theology advocated by Epicurus.

For many people, this would appear a drastic step. The nonexistence, or at least the insignificance, of God, is something that many people will not concede.
Here we see that Epicureanism begins to alienate those who would seek a happy life, but do not wish to abandon their faith. In this way, the philosophy of Epicurus can be a bit polarizing. It can be argued then that Epicureanism lacks the breadth that we might hope to find in moral philosophy.
Facebook