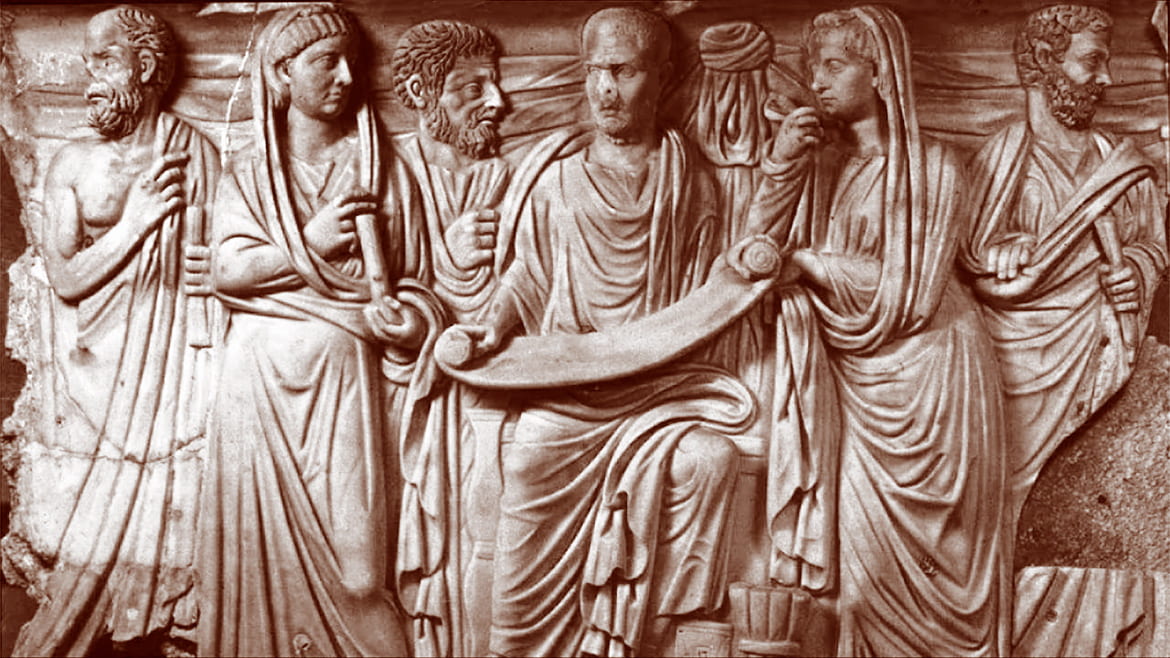 Written by Ed Whalen, Contributing Writer, Classical Wisdom
Plotinus (205-70 AD) was one of the most important philosophers of late antiquity. He is often called the founder of Neo-Platonism, an interpretation of the philosophy of Plato. Plotinus’ thought influenced many philosophers and was respected by Christian thinkers.
The Life of Plotinus
There are few records of Plotinus’ life. It has been claimed that he was born in Egypt. His name is a Latin one, but he was deeply influenced by Hellenic philosophy and culture. At the age of 28, Plotinus decided to study philosophy, becoming the pupil of Ammonius. Ammonius also taught several other prominent thinkers, including the Christian theologian Origen.
In 250 AD, Plotinus accompanied Emperor Gordian in his invasion of Persia. It was later claimed that Plotinus went along because he wanted to meet the wise men of Persia and India. After the death of the Emperor, Plotinus was lucky to return to Roman territory with his life. Later he went to Rome, where he became a teacher of philosophy.
Plotinus was both a man of action and an intellectual. He became friendly with Emperor Gallienus and tried to persuade him to build a new city in Italy modeled on the teachings of Plato. It seems that Plotinus was very well-connected; many leading Romans made him the guardian of their children in their wills. The philosopher died after a long illness. His works were compiled by his disciple Porphyry in the work known as the Enneads.
The Philosophy of Plotinus
Plotinus was a disciple of Plato, but he interpreted the great philosopher in a new way, in so doing developing a new philosophy. Plotinus argues that the transcendent and indivisible exists. It is neither being nor non-being, and is the ultimate form of reality.
In philosophy, this concept is known as Monad. Plotinus argued that all things emanated from the One. Everything we see around us has its source in the One. Things emerged from the One without any act of creation; they simply emanated from the transcendent reality.
In the Enneads, Plotinus compared the One to the Sun which emanates light but is not diminished by this. The most important emanation from the One is the World Soul followed by Nous (intelligence). Human souls and being, or matter, have their source in the World Soul. Plotinus believed that just as everything came from the One, everything seeks to return to union with the One.
The Meaning of Life
Plotinus was a moral and religious philosopher concerned with humanity’s ultimate happiness. He believed that happiness could only be attained if a person identifies with the highest thing in the universe.
Taking a page from Plato, Plotinus argued that happiness was the contemplation of the Forms. These Forms are the eternal ideas and ultimate source of reality. Plotinus believed that the ‘perfect life’ was possible if a person contemplated the Forms and lived a life of reason.
For Plotinus, the meaning of life was unity with the One. This could be achieved intellectually by the mind (Nous). By contemplating the world and not being attached its material manifestation, the mind is elevated. This can lead to ‘henosis’ which is the mystical union of the human soul with the ultimate reality—the World Soul and then, ultimately, the One. In this way, humans can become whole and, it is suggested, attain a form of perfection due to the dissolution of the self with the One. There are many religious interpretations of Plotinus’ work. Modern scholars have also noted similarities between Plotinus’ work and Buddhist and other Eastern traditions.
The Influence of Plotinus
Plotinus’ teachings led to a growing interest in Plato and many regard him as the founder of the Neo-Platonic School of thought. This was not only influential in philosophical circles but also contributed to a revival in paganism among those opposed to Christianity. After the death of Plotinus, the Christian Church became very influential, becoming the de-facto state religion during the reign of Constantine the Great. Emperor Julian the Apostate—the last pagan ruler of Rome—was very influenced by Plotinus and attempted to restore paganism, but he failed.
Ironically, despite his popularity with anti-Christian thinkers, Plotinus was also influential in Christian circles. Many scholars have also detected the influence of the Neo-Platonist in medieval Jewish and Muslim thought. The mystics, in particular, have been influenced by his writings throughout the centuries. There are possible similarities between Plotinus’ views and those of Spinoza.
Conclusion
Plotinus was one of the most important thinkers in the late ancient world. He created a new philosophical school based on the teachings of Plato in which he developed a metaphysical system based on the One. Plotinus believed that individuals could achieve happiness by unifying with this transcendental reality through the use of their intellect. Plotinus’ work was very influential in his own time and beyond, even contributing to a pagan revival in the 4th century AD.
Reference:
Russell, B (2000). The History of Western Philosophy. Routledge: London.
Facebook