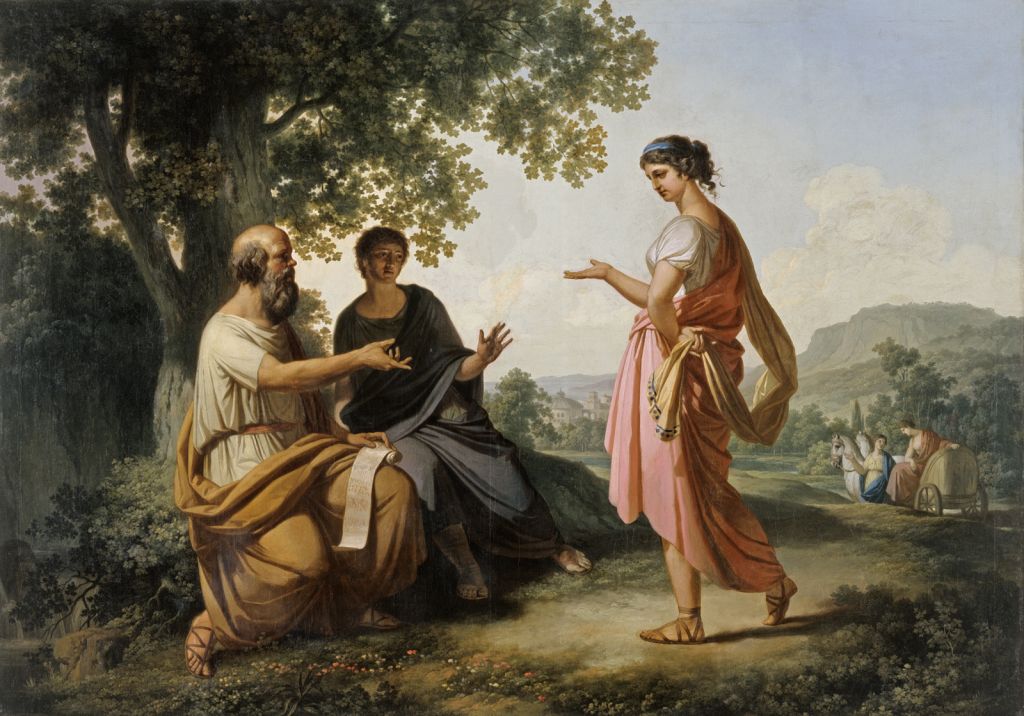 Socrates and Euthyphro: The Nature Of Piety

By Van Bryan, Contributing Writer, Classical Wisdom
As a general disclaimer, it is important to remember that “Euthyphro” was written by the philosopher Plato. While Socrates is used as a character in this dialogue, it is unknown if Socrates himself would have held such ideas. Although it is very possible that many of these thoughts were Socrates’ it is also possible that the philosophy originated from Plato. However, because this is an early Platonic dialogue, it is largely considered to be an accurate reflection of the philosophy of Socrates.
At the opening of “Euthyphro” we find Socrates meeting with the young Euthyphro on the porch of the King Archon in Athens, several weeks before the events of “Apology“. Socrates has been required to visit with the King Archon before he is put on trial for impiety. Euthyphro appears to hold much respect for the elderly philosopher, and is shocked that any man would find reason to prosecute him. Socrates explains that he is being hounded by Meletus, a man “…with a beak, and long straight hair, and a beard that is ill grown”.
Not being one to enjoy talking about himself, Socrates asks what has brought Euthyphro to the court of Athens. Euthyphro explains that he is there to put his own father on trial for murder. Socrates is shocked to hear this news and inquires about the nature of the man’s crime. Euthyphro explains that his father held a farm laborer in chains after the worker killed a slave in a drunken fight. Euthyphro’s father, unsure about what to do with the man in chains, had sent a messenger to Athens to consult with the various religious officials. 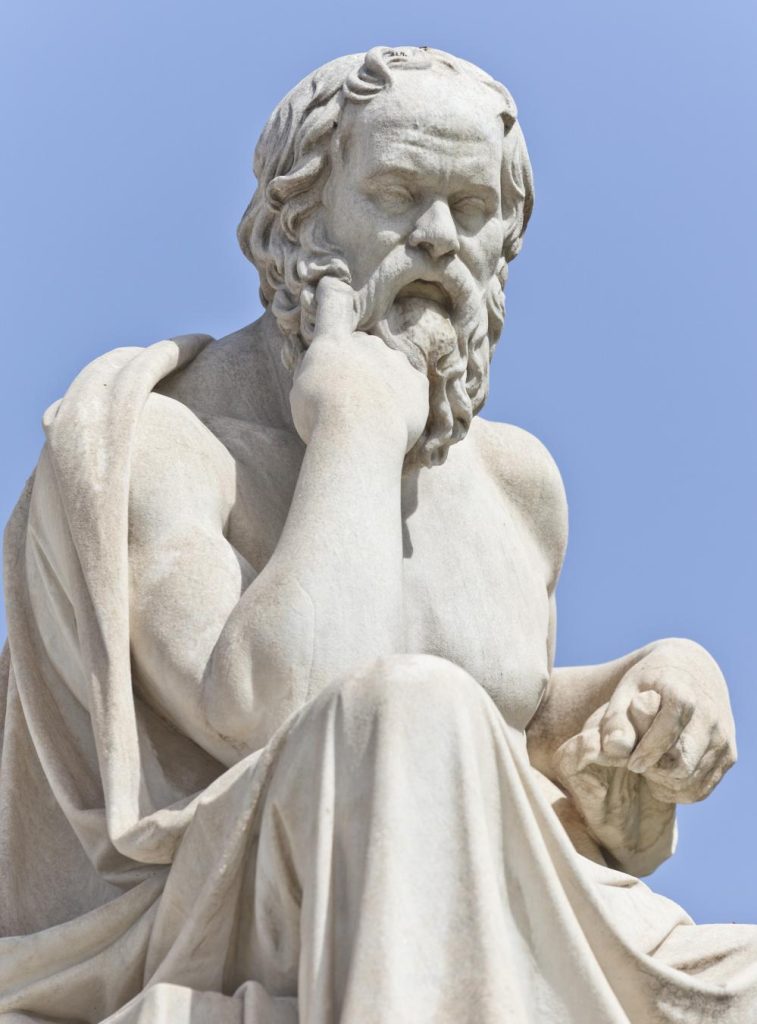 However before the messenger could return, the shackled man dies from exposure and dehydration. Euthyphro now views his father as a murderer, albeit an accidental one, and will pursue punishment for his father’s crimes.
Rather than believing that his actions are a betrayal, Euthyphro claims he is perfectly justified. The boy seems to believe that he has uncovered the true nature of piety, and that by prosecuting his father he is honoring the will of the gods. It is at this point that Socrates begins his philosophical inquest and slowly begins to explain why Euthyphro is actually a bumbling idiot. 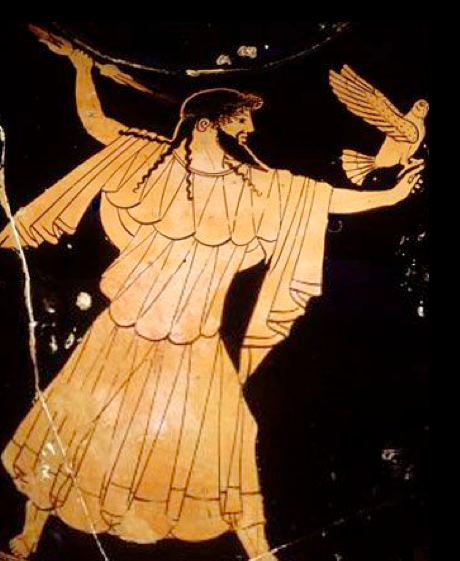 Zeus depicted on a Vase

Socrates, in a manner which I can’t help but think is sarcastic, congratulates Euthypro on his wisdom and intellect. For if he truly understands piety and can interpret the will of the gods so easily, then he must be among the wisest of men in all of Greece. Socrates then asks Euthyphro, very plainly, “what is piety, and what is impiety?” Euthyphro welcomes these questions and explains that piety is doing as he is doing, prosecuting murderers regardless of their relations.
Socrates points out that while that action might be considered pious, it is merely an example of piety not a general definition of piety itself. Socrates again asks: “What is piety?” Euthyphro then gives the definition that that which is dear to the gods is pious, and that which the gods despise is impious.
Again, Socrates has a relevant counter argument. The gods of ancient Greece would often disagree. They regularly fought amongst each other and would engage in bickering and senseless quarrels. This is all to point out, obviously, that the gods do not always love the same things. Which would lead us to several conflicting definitions of piety.
Euthyphro concedes this point, although it is now clear he is beginning to be annoyed with Socrates. The two men continue their discussion, and after some twists and turns, they conclude that that which is pious is loved by all the gods and that which is impious is hated by all the gods. This seems like it would be a worthy definition, however Socrates has a nasty habit of systematically destroying every knowledge claim he comes in contact with. And so he proposes this fundamental question, that has been repeated for centuries to come.
“The point that I should first wish to understand is whether the pious or holy is beloved by the gods because it is holy, or holy because it is beloved by the gods.” – Plato, from “Euthyphro”
And it is this question that philosophers ever since have been wrestling with. It is perhaps one of the first profound examples of western theological philosophy. In the context of the dialogue, Euthyphro seems rather taken aback by the question.
After some gentle prodding, the young man seems to conclude that that which is pious is loved by the gods because it is pious. And while this seems like a good answer, Socrates of course disagrees. Socrates points out a rather fatal contradiction in this line of thinking. It goes something like this… 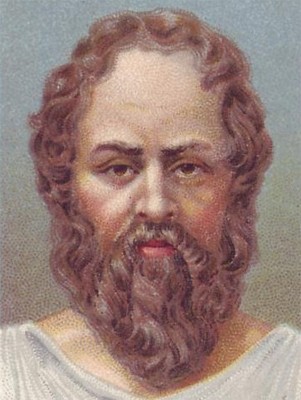 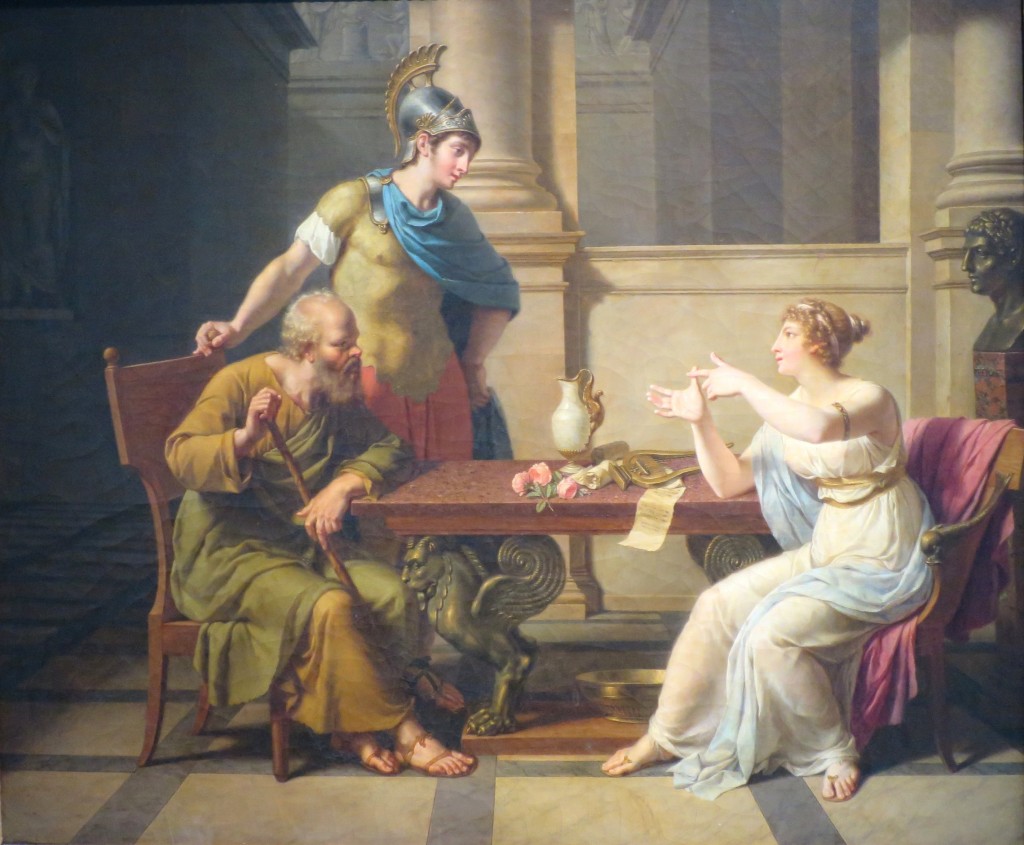 And if that does not help, and you feel so compelled to throw up your hands and storm out of the room, then rest assured you are not the only one. Not long after Socrates makes this baffling claim, he offhandedly insults Euthyphro and essentially informs him that his argument is entirely useless.
Socrates then circles back and asks again (because apparently he won’t be satisfied until the young man is driven completely mad) ‘what is piety?’ It is at this time that Euthyphro tells Socrates he really must go and makes a hasty retreat, presumably while scratching his head and thinking to himself ‘jeez, no wonder they want to kill that guy’.
As you may or may not have realized, there are some very serious implications to these questions proposed over two thousand years ago, questions that might reduce even the most dedicated theologian to a whimpering, cowering wreck. For instance, if morality and goodness is only so because God commands it to be then we are faced with a potential problem. What if God were to, hypothetically, command us to torture and kill each other. It would then stand to reason that those actions would be pious or moral.
If we examine the other side of that coin, we become equally confounded. If God commands us to do that which is moral because it is moral or pious in the first place, then God is no more than a messenger boy. His role as divine creator has been dramatically undercut. If morality exists out there in the universe, independent of God, then we no longer need divine inspiration to seek a moral, virtuous life. We can cut out the middle man, so to speak.
Facebook